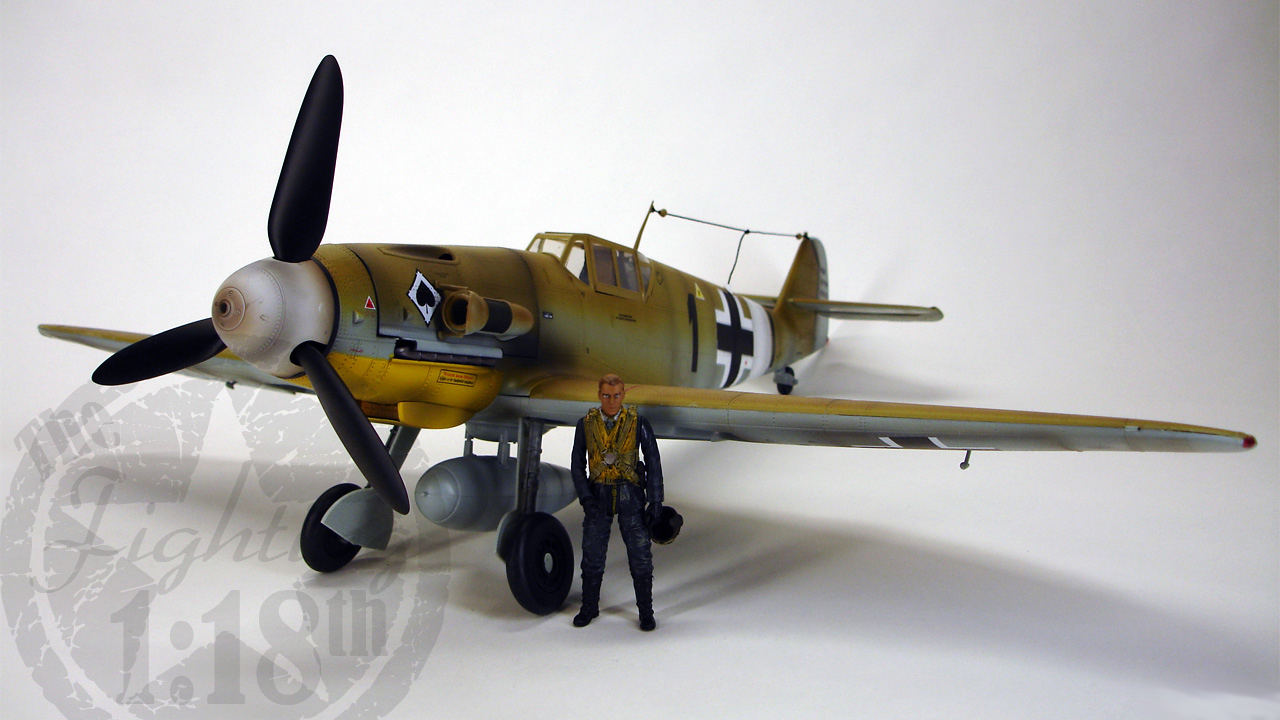 BBi has come to be known as one of the kings of the 1:18 market. Surprisingly, it is because of their amazing  balance between durability and details within their toys. This piece is a shining example of those values, but unfortunately this bird is not without its flaws.

The Messerschmitt Bf 109 was a German World War II fighter aircraft designed by Willy Messerschmitt in the early 1930s. It was one of the first true modern fighters of the era, including such features as an all-metal monocoque construction, a closed canopy, and retractable landing gear. The Bf 109 was produced in greater quantities than any other fighter aircraft in history, with a total of 33,984 units produced up to April 1945. Fighter production totaled 47% of all German aircraft production, and the Bf 109 accounted for 57% of all German fighter types produced. A total of 2,193 Bf 109 A-E were built prewar, from 1936 to August 1939. Approximately 1,000 Bf 109 derivatives were manufactured postwar under license as Czechoslovakian-built Avia S-99 & S-199s and Spanish-built Hispano Aviación HA-1109 and HA-1112 Buchons.

The Bf 109 was the backbone of the Luftwaffe fighter force in World War II, although it began to be partially replaced by the Focke-Wulf Fw 190 from 1941. The Bf 109 was the most successful fighter of World War II, shooting down more aircraft than any of its contemporaries. Originally conceived as an interceptor, it was later developed to fulfill multiple tasks, serving as bomber escort, fighter bomber, day-, night- all-weather fighter, bomber destroyer, ground-attack aircraft, and as reconnaissance aircraft. Although the Bf 109 had weaknesses, including short range and challenging take off and landing characteristics, it stayed competitive with Allied fighter aircraft until the end of the war.

The Bf 109 was flown by the three top-scoring fighter aces of World War II: Erich Hartmann, the top scoring fighter pilot of all time claiming 352 victories, Gerhard Barkhorn with 301 victories, and Günther Rall claiming 275 victories. All of them flew with Jagdgeschwader 52, a unit which exclusively flew the Bf 109 and was credited with over 10,000 victories, chiefly on the Eastern Front. Hans-Joachim Marseille, the highest scoring German ace in the North African Campaign, also claimed all of his 158 victories flying the Bf 109, against Western Allied pilots. Franz “Nawratil” Schieß (also spelt Schiehs) was born on 25 February 1921 at Wörth near St Polten in Austria. He participated in the Polish campaign as an Arbeitsdienstmann before transferring to the Luftwaffe and undergoing fighter pilot training. Schieß was posted to JG 53, based on the Channel front, on 8 March 1941. Leutnant Schieß was assigned to the Geschwaderstab, where he was appointed Adjutant under the tutelage of Günther Freiherr von Maltzahn (68 victories, RK-EL).

On 22 June 1941, Schieß recorded his first victories on the opening day of Operation Barbarossa, the invasion of Russia, when he shot down a Russian I-153 biplane fighter on a morning mission and a DB-3 twin-engine bomber in the afternoon. By early August, he had increased his tally to 14. In early August, JG 53 were withdrawn from the Eastern front and, following re-equipment, deployed to the Mediterranean theatre. From bases in Sicily, Schieß operated over Malta recording 11 victories, one of which was not confirmed, including his 20th victory, a RAF Spitfire fighter shot down on 18 July 1942. At the end of November, JG 53 was operating over Tunisia. Schieß continued his success, gaining a further 13 victories, including his first four-engine bomber, a USAAF B-17 shot down near Bizerte on 29 January 1943 for his 36th victory. On 16 February 1943, Schieß was appointed Staffelkapitän of 8./JG 53. He successfully led the unit through the campaigns in Tunisia, Sicily and Italy. He recorded his 50th victory, a USAAF P-38 twin-engine fighter near Pantelleria, on 21 May. Oberleutnant Schieß was awarded the Ritterkreuz on 21 June for 55 victories. He was then sent on a lengthy leave. Returning to the front in August, Schieß shot down 12 enemy aircraft in 11 days of which seven were P-38 twin-engine fighters. Schieß failed to return from a mission on 2 September 1943. He led a scramble against a USAAF bomber formation over Mt Vesuvius. Schieß attacked the fighter escort and a dogfight developed extending over the sea to the island of Ischia. It is thought that Schieß, in Bf 109 G-6 (W.Nr. 160 022) “Black 1”, fell victim to the USAAF P-38 twin-engine fighter escort.

“Nawratil” Schieß was credited with 67 victories in 657 missions. He recorded 14 victories over the Eastern front. Of his 53 victories recorded over the Western front, three were four-engine bombers, 17 were P-38 twin-engine fighters and 18 were Spitfire fighters.