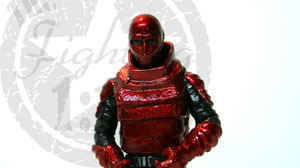 The Crimson Guard. They have been iconic Cobra troopers for years, representative of the insidiousness of Cobra, and the lengths they will go to achieve victory (Hiring ACCOUNTANTS!).

For the Rise of Cobra movie, Hasbro has introduced a ‘revamp’ of the classic Crimson Guard; the Crimson Neo-Viper.

Is this a fitting tribute to the classic “Siegies”, or a quick way to cash in on a repaint? The Crimson Neo-Viper is labeled as “Cobra’s Royal Guard”, which is a bit of a departure from previous generations of Crimson Guards. The original Crimson Guards were elite troopers who were placed all over the country in top businesses, to help fight for Cobra from the inside. They were regarded as the “best of the best”.

The Crimson Guards were fan favorites since they were introduced in 1985, appearing in numerous different incarnations, but always keeping the core principles intact.

What exact role the new Crimson Neo-Viper will play will not be known until the movie is released on August 07th, 2009. CRIMSON NEO-VIPERS are masters of power and lethality within the COBRA ranks. They guard the leaders of COBRA and willingly submit to agonizing procedures to obtain exceptional abilities and incredible endurance.