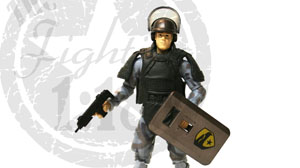 The PIT Commando is another highly anticipated addition to the Rise of Cobra figure lineup. Ever since this figure was announced, and pictures started showing up online, people have been clamoring to get their hands on this figure.

For starters, this figure comes with enough guns and equipment for a small militia. The figure design is also based off the fan-favorite Dusty from the 25th Anniversary line, making it a seemingly win-win situation when it comes to purchasing the PIT Commando.

Does the figure pull it off? Or does this Commando fail it’s mission? The idea behind the G.I. Joe’s secret base, codenamed: “The PIT”, goes back to the 1980’s with the Marvel comic series. Numerous cartoons and other comic series have referenced the “PIT” as the main headquarters for G.I. Joe in the United States of America. The “PIT” is a multi-level underground structure, capable of housing many of the G.I. Joe team’s vehicles, weapons and other necessities of battle.

With Rise of Cobra, Hasbro is taking the Joe team international, locating the “PIT” somewhere in the Sahara desert. The basic premise for the “PIT” stays mostly the same, with the G.I. Joe teams secret headquarters being located underground.

Guarding the base, is an elite staff of “PIT Commandos” who are well trained and well versed in numerous military specialties. These commandos are every bit a part of the new G.I. Joe as the rest of the named characters. G.I. JOE PIT COMMANDOS ARE RIGOROUSLY TRAINED FOR ANY SITUATION THAT REQUIRES IMMEDIATE RESPONSE. DECISIVE ACTION AND OUTSTANDING EXPERTISE. THESE ELITE SOLDIERS ARE SPECIALISTS AT COMBAT, RECONNAISSANCE AND COVERT MISSIONS.