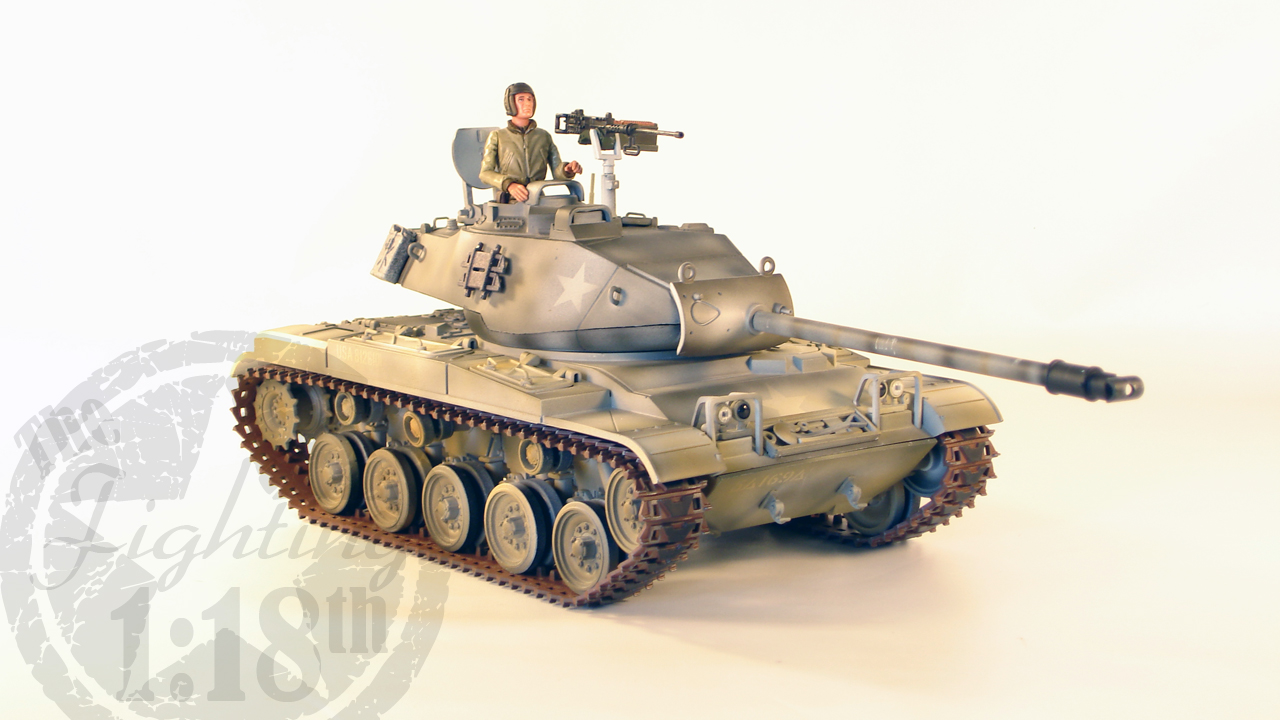 When I talk to people about the M41 Walker Bulldog Light Tank from 21st Century Toys I usually get a collective “huh?”. The Walker Bulldog is one of those tanks that seems to have slipped through the cracks of history. Most casual fans in this hobby didn’t even know the tank existed in real life, let alone in the magnificent scale of 1:18.

If someone, by chance, has seen the Walker Bulldog immortalized in plastic they are usually unimpressed by pictures on the internet. Again, the tank was forgotten by the military rather quickly. Hell, the tank never saw combat with the US Army, so why the would anyone care about buying it in 1:18? The tank is even small to boot. Put to shame by its more powerful, massive, and battle tested cousin, the M48 Patton Main Battle Tank.

Well kids, I’m here to tell you’ve missed the boat entirely. If you don’t own this piece, I do pity you. You have missed out on a true 1:18 scale treasure. Forget its history, forget that in real life it was troublesome, this tank is the reason why we are all collecting 1:18 scale toys.

I discovered this tank when I was searching for some alternative pieces of armor for my Cobra army (Yes, that is GI Joe). Without getting into too much detail, I scoured the existing 1:18 scale pieces for anything that might make sense in a modern combat arena. I wanted to give Cobra some real firepower. I found the M48 Patton and The M41 Walker Bulldog. After educating myself on the history of the tank and discovering the Bulldog was still in service today, used to great effect in the Republic of China Army, I knew I had to get a few of these.

I expected the tank to be nice and unique, but I didn’t expect to fall in love.

The M41 Walker Bulldog was an American light tank developed to replace the M24 Chaffee. It was named for General Walton H. Walker who died in a jeep accident in Korea. On 07 November 1950, the US Ordnance Committee Minutes (OCM) issued item #33476, redesignating the heavy, medium, and light tank classifications to classifications according to armament; the 120mm (heavy) Gun Tanks, 90mm (medium) Gun Tanks, and the 76mm (light) Gun tanks. The M41 was a very agile tank that was designed to be air-transportable and provide air dropped infantry with a support vehicle. When the design was finalized the goal of being air transportable by current 1950’s aircraft was impossible.

Along with not having met its original design goal, the Bulldog was plagued with problems since it’s entrance into the United States Army such as excessive engine noise and it’s uncanny ability to consume gasoline. These problems, along with a cramped interior made it unpopular in the Army and a replacement was quickly sought (The M551 Sheridan Light Tank eventually replaced the Walker Bulldog). Due to the problems, the M41 Walker Bulldog Light Tank never saw real combat with the US Army.

Several tanks were given to the Republic of Vietnam, but due to its light gun the tank was relegated to internal defense duties. When it did see combat however, the incredibly accurate and reliable 76mm gun and the tanks overall agility proved to be quite effective against the communist T-55 tank. The tank earned a great reputation amongst the ARVN and 200 units were in service at the end of 1973.

Although the Walker Bulldog is a footnote in American military history, the tank was exported heavily to foreign countries where it still serves today in part to numerous engine and technology upgrades that have made this vehicle a force to be reckoned with.

The Republic of China Army (Taiwan) in particular has found the tank to be quite capable in an anti-amphibious role against the looming threat of invasion from The People’s Republic of China. The updated M41D Walker Bulldog has been updated with a new 76mm locally produced gun, a new 500 HP Detroit diesel engine, thermal targeting, digital ballistics computers, laser rangefinder, and reactive armor.