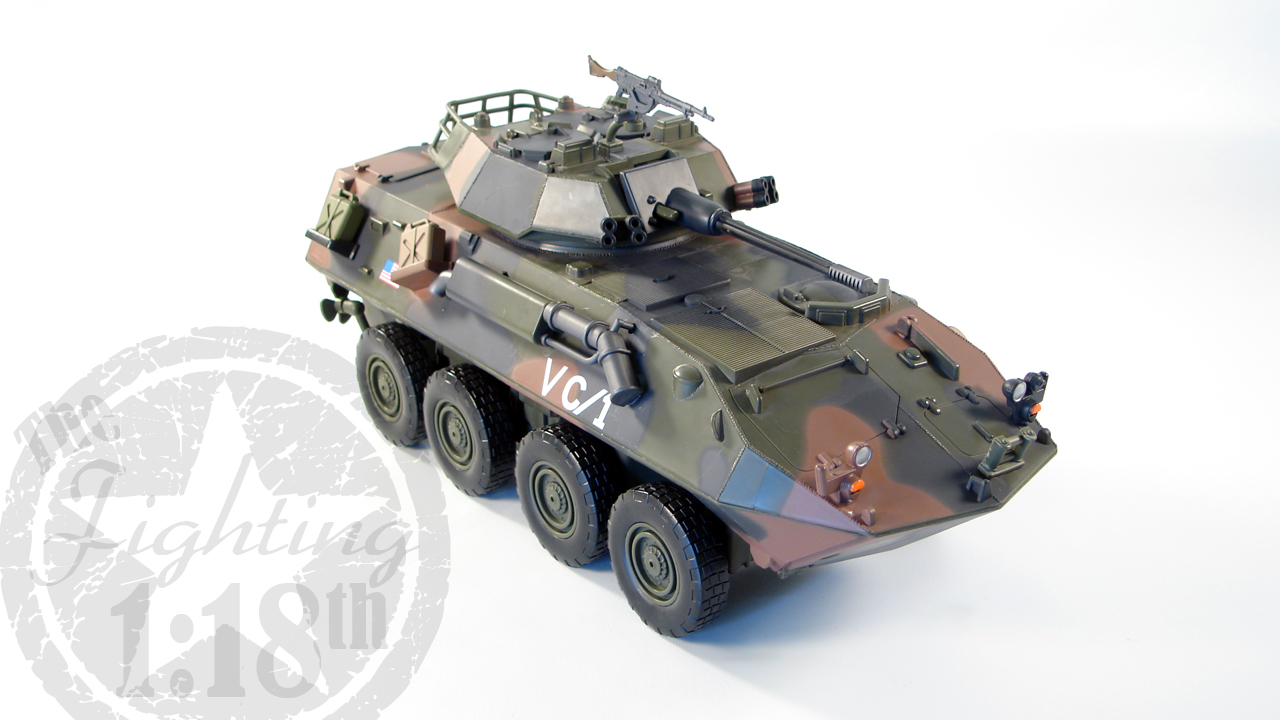 The LAV-25 is painted in a three tone basic woodland camouflage. I’ve never owned a woodland vehicle from Unimax so this was a nice change of pace for me, but I wish there was a desert version to match the other vehicles I have. There is no desert option as of right now.

Unlike previous Unimax offerings there is no weathering. Nothing, zilch, nadda (amongst other trite expressions). To me, without the weathering the vehicle has no chance of surviving as anything but a toy. The molded in stowage, such as the shovel mounted on the top rear, isn’t even painted as it was on the Bradley. Although  those details are missing, there are some tampo markings on the vehicle such as allied and US flag markings and a unit identification as C/1 that I haven’t been able to identify.

The included vehicle commander’s m240 does have a brown stock added to break up the nicely detailed, but unweathered commander’s gun.

The whole LAV is built just as sturdy and as rigid as any Unimax product that came before. Each pair of wheels is joined by a metal axle like a traditional toy truck. The tires are rubber and roll extremely well. I’m not sure why, but I felt the rubber tires was a huge treat. I know that we get rubber treads on the armor, but for some reason I expected plastic tires. Not even Hasbro can give us rubber tires on the majority of their vehicles, so I guess I’ve just been conditioned to expect certain things.

The commander’s m240 on the top of the turret is made of a less rigid, more rubbery plastic. The support bar is the same way. I suspect this to prevent children from stepping on it and injuring themselves and to give the piece some resistance to what inevitably is going to become the most active area on the toy by children. The stowage cage is also constructed of the same rubbery plastic but is slightly more rigid.

As a note to Unimax, it would have been the bees knee’s if you had made the pintle mount big enough to accommodate the mark 19 grenade launcher packed in with the Bravo Team figures from last year. I know that is not how they mount the Mark 19 in real life, but again, more playability.

The Unimax LAV-25 does not come packaged with any figure, however there is a full line up of figures to compliment all the vehicles released so far. They are now available in three lines: Forces of Valor: Bravo Team available exclusively at Target Stores, Assault Force, which features the same figures and vehicles as Target but rebranded for distribution at Toys R Us, and lastly, an as of yet unnamed online distribution exclusively for World War II pieces.