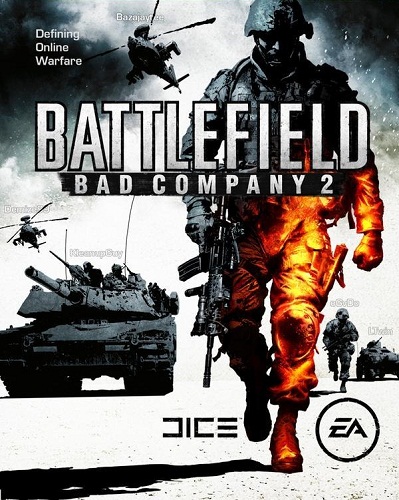 *Note: This review covers the Xbox 360 version of Battlefield: Bad Company 2, it is also available on the PC and for the PlayStation 3. One of my all-time favorite games for the Xbox 360 was the original Battlefield: Bad Company by EA/Digital Illusions (DICE).

I had been a fan of the Battlefield franchise since Battlefield: 1942 came out for the PC in 2002. It was the first online PC game that I had played at the time that had large maps and an extensive roster of user-controlled vehicles. The running and gunning was largely the same as the rest of the PC shooters of the day, but the fact that they incorporated user-controlled jeep, tanks, planes and even ships (!!) made this game truly revolutionary. The added freedom of vehicles, combined with the fact that most vehicles had room for more than one person, led to a giant increase in teamwork, even on public servers.

It wasn’t long before I found myself a clan to play with ( ]V[egaTribe! ), and was playing nonstop. I continued to play through all the sequels, from the expansion packs to Battlefield: Vietnam and Battlefield 2. Each release added something to the pile, and with Battlefield 2 they brought true modern combat to the table (A lot sooner than Infinity Ward..). However, the one thing that was missing from every Battlefield game was a true single-player mode. All the games were online based, and only had a very basic “vs Bot” mode that you could play by yourself.

That all changed in 2008, when EA/DICE released Battlefield: Bad Company for the Xbox 360 and PS3. For the first time there was a scripted story to go along with the robust multi-player that fans had become accustom to. EA/DICE also introduced a lot of really interesting features in Bad Company, including the ability to destroy almost anything on the map. Most buildings could be destroyed (or damaged) with rocket fire or grenades. Trees could be cut down with machine gun fire, etc. It really added another layer to world.

However, what sold me on Bad Company was the fact that it was downright hilarious. It ranks as the funniest game I have ever played, I had so many “laugh out loud” moments while playing through the single-player experience I couldn’t keep track. The writing for the story was witty and sharp, with great references thrown in from pop culture, military jargon and movies. The game follows the actions of a group of misfits attached to “B” Company in the 222nd Army Brigade, hence “Bad Company”. The action goes from international conflicts to tracking down mercenary gold. By the time the game came to an end I was very satisfied with the journey.