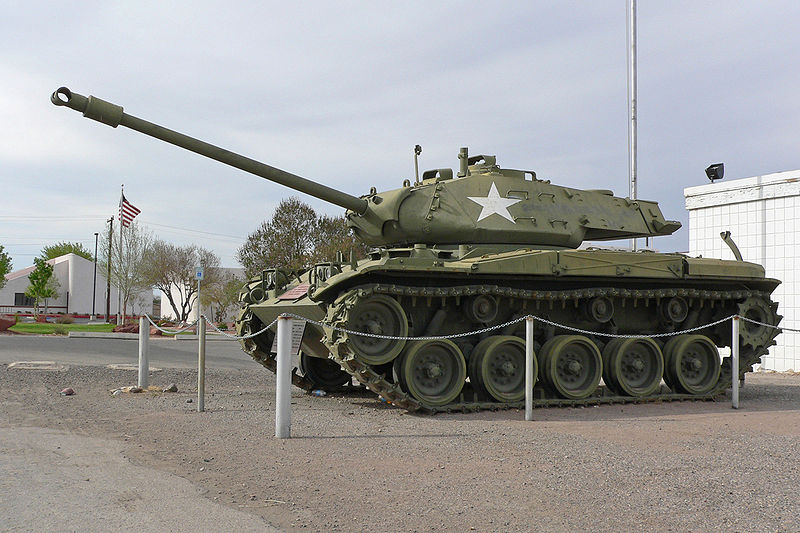 The M-41 light tank was developed to replace the M-24 Gen Chaffee light tank which had been in service since late 1943. The M-24’s  75mm gun had proven ineffective against Soviet T-34 tanks in Korea and newer Soviet tanks were being developed with better armor and guns.

The initial replacement tank was the T-37 Phase 1, which was introduced in 1948 mounting a 76mm gun and two cal 50 machine guns…one coax and one for the tank commander.   The commander was located on the left as in the M-24. Other ideas included two machine gun pods on the turret sides which were remotely controlled by the tank commander.  The Phase 1 turret also included a stereoscopic range finder.

Phase 2 had a totally redesigned turret which tested an auto loader and gun stabilizer.  Due to higher than allowed costs, the range finder, side machine gun pods and stabilizer were dropped.

A new turret was designed and the test tank re- designated T-41E1.  A new development of a hydraulic turret traverse was installed, tank commander’s position moved to the right side and the tank designated T-41E2.

Various tracks were tested such as the single pin steel and double pin rubber chevron, but the Massey-Harris 21 inch single pin track with renewable V grouser has accepted as standard. This track is very durable, dependable and required very little maintenance.