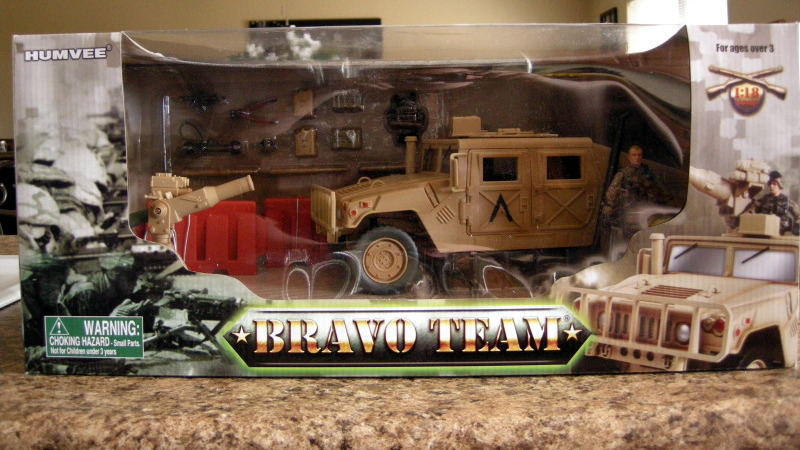 Thanks to one of our Officer’s XOC2008, we have some first look photos at a BRAND NEW 1:18 scale HMMWV by Unimax/Bravo team.

It looks to come with a FUNCTIONAL TOW launcher (complete with shooting missiles even), with FUNCTIONAL stand (I’m looking at you 21st Century Toys!). It also comes with two barricades that link together, along with some gerry cans, MRE boxes, and a backpack, weapon, and one of their 1:18 Bravo Team figures.

This version of the 1:18 scale HMMWV also appears to have the correct HMMWV grill, as well as a push bar! According to XOC2008, there is a plastic windshield, but there is no plastic for the side windows. Unimax/Bravo Team did not show this off at ToyFair 2012, so this release comes as a bit of a shock to all of us, and now we’re left wondering what else they have up their sleeves! New figures? That elusive Stryker?

Unimax/Bravo Team has not even updated their website to reflect this release, so only time will tell. We’ve sent out some emails to their press department asking for clarification on their 2012 Bravo Team lineup. Stay tuned! I think these would look pretty good with a good wash and some weathering. Hopefully the aftermarket customizing scene will give us some much needed variants to the standard TOW HMMWV.

Have you seen one of these in the wild yet? How much were they for you? Chime in on our Forums here!

Thanks to XOC2008 for the great pictures and news!