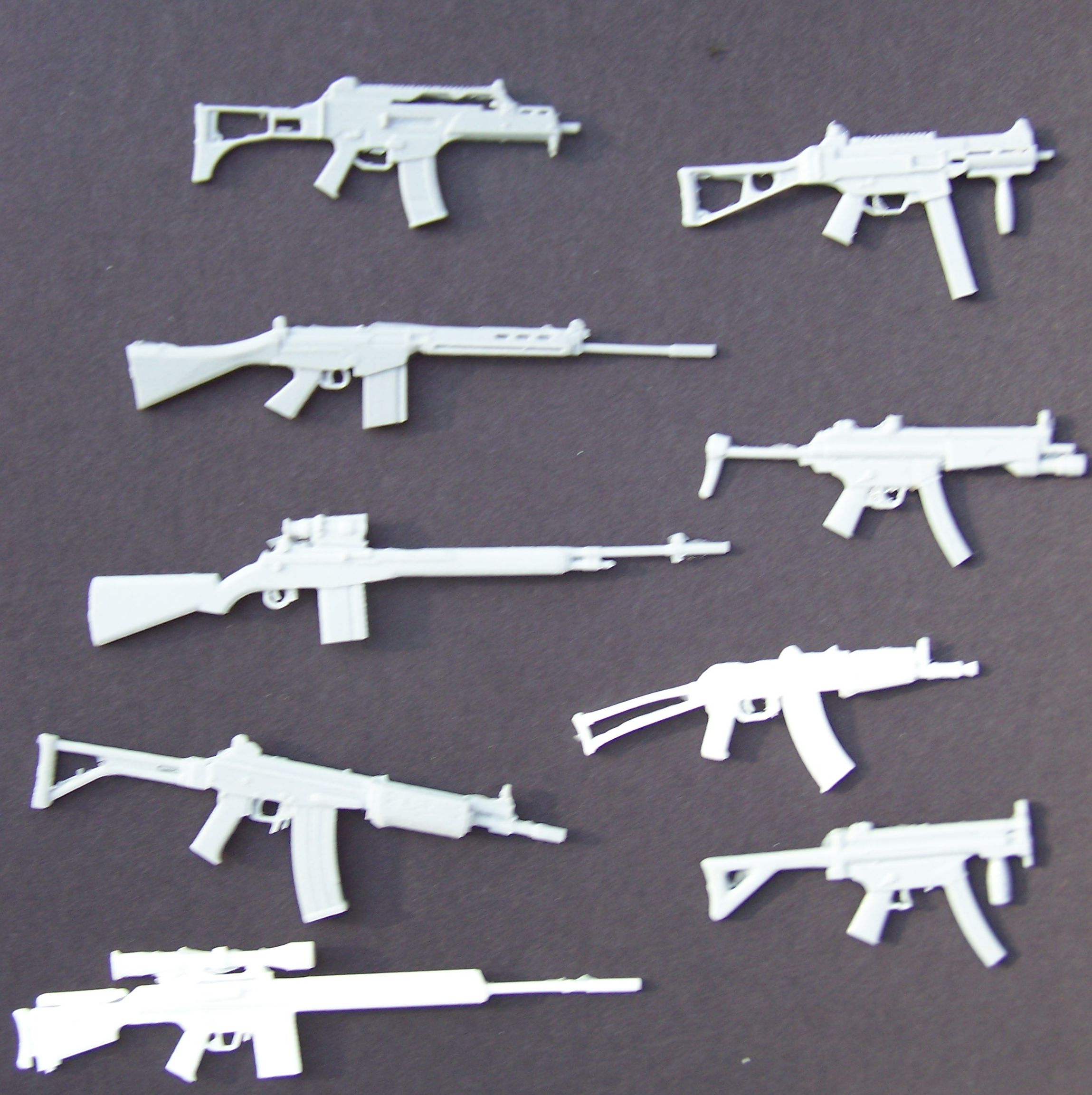 Here at the Fighting118th we had the privilege of getting a exclusive sneak peek at Falcone’s Wave 1 weapon assortment.  One of our Officer’s Fogger1138 has the story: I was fortunate enough to be given review copies of some of Falcone’s upcoming 1:18th scale weapon releases. You may have seen him posting in the forums Here He’s making some 1:18th scale weapons that we haven’t seen yet, to provide some variety for customizers and those who like to outfit their figures with different gear.  My understanding is that currently he plans on making these available at a cost of $1 per weapon.

Nine out of the ten weapons in his “wave one” were made available to me by SlayerDave with permission from Falcone.  It’s worth noting that these are early release copies and may not reflect the final product,  as Falcone has stated in the forums that he is making tweaks before he releases these,  so there will likely be differences between what’s shown here and what is ultimately released.  Also, what I was given were cast copies of Shapeway product, as I understand it,  and they may not reflect the quality and type of plastic that is ultimately used in production.

Those who like detail will not be disappointed in these pieces – every weapon has a lot of detail, which hopefully shows up well in the photos. Construction is the only place I was able to find fault, and even that was only with a few pieces, which I talk about in the individual write-ups. None of these are make or break issues for the individual weapons or the set as a whole, but are certainly things that potential buyers should be aware of. It’s also possible that these are among the planned changes before release.

Mostly, though, I’m going to let the photos speak for themselves.

Didn’t photograph particularly well due to the color – this one was cast in white rather than gray,  so it washed out somewhat in every lighting I tried.  My only complaint with this weapon is that the grip is a bit small for the figures I tried it on. On the other hand, the figures I tried were able to grip either the magazine or the forward stock easily, so a two-handed hold is still doable.

We’ve seen several MP5 releases before, from a variety of sources.  I took a few comparison shots with other,  similar releases. There are a few places on some of the weapons, (most notably on triggers and trigger guards, where the plastic is very thin. While trimming some flash I broke one of the trigger guards on the MP5K, visible in the photos. That’s why I left flash on many of these pieces. Still both nice weapons, though, and having more MP5s is always good.

I’ve always liked the look of this weapon, and this is a nice, clean version that I’ll probably give to several figures – I’m very happy with how it looks.  It’s smaller than the Marauder release, which will please those who thought that was too big. You can see exactly how it scales in comparison photos. Another release that we’ve seen before, in other versions from other manufacturers – this one makes a nice addition for people who like the G36 but are wanting some variety.  Smaller than either the Hasbro release or Marauder’s. Also a smaller grip, so some figures may not be able to hold as well. I really like the Galil, there’s lots of nice detail on this one. Both it and the FAL look really good with most any figure I tried them with. Have seen lots of requests for a good FN FAL, and this should make everyone happy. The one I was given did not have the handle that I understand will be on the final release,  but it still looks great. The grip may cause problems with older figures, but any of Hasbro’s newer releases with the swivel wrists will look just fine with this one. Makes for an excellent sniper/marksman alternative. Like the AKS 74u, this one was white rather than gray, so some details didn’t photograph as well.  Don’t let the pictures fool you – this ended up being one of my favorites of the weapons. Nicely detailed and imposing-looking in a figure’s hands.  My only complaint is that it has a thin barrel that bent easily,   probably due to “in-scale” issues with the width of the actual barrel.  Shouldn’t be too bad if you’re careful with it.

I’m excited for the release of these, and I was thrilled to be able to get some copies before they’ve been made available to the general public.  Based on what I’ve seen here,  I’d definitely buy a full set, and multiples of several of them. Thanks again to Falcone for allowing me to review these. A big thanks to Fogger1138 and Falcone for providing us with this Sneak Peek.  You can discuss this exclusive story Here

Don’t forget to check the full gallery on page 2!

Previous: Footloose is Shipping
Next: Men In Black figures are here!