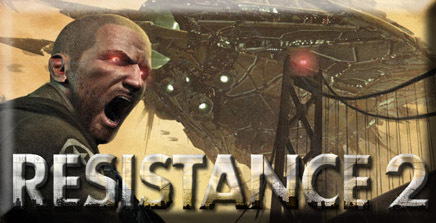 Resistance 2 was released in November 2008 and is the direct sequel to one of my favorite and best selling PS3 games.  The game picks up right after Resistance: Fall of Man.  You continue as American Soldier Nathan Hale fighting the alien race known as Chimera. Immediately after your fight in Europe,  Hale is extracted by a Special Research Projects Administration VTOL and brought to Iceland.  After surviving a Chimera attack,  Hale is introduced to a group of Special Forces known as the Sentinals. Sentinals are soldiers who have been affected by the Chimera virus much like Hale and have super natural abilities. As you continue through the story,  Hale gets promoted to Lieutenant and the Chimera invades the United States.  You will battle the Chimera all over the country including California,  Idaho,  Utah and Illinois.

You will experience a completely taken over America that has been devastated by the Chimera including a very surreal Chicago mission. The overall Campaign is shorter than the original game with about 10 hours to complete however the pacing and action is better this time around.