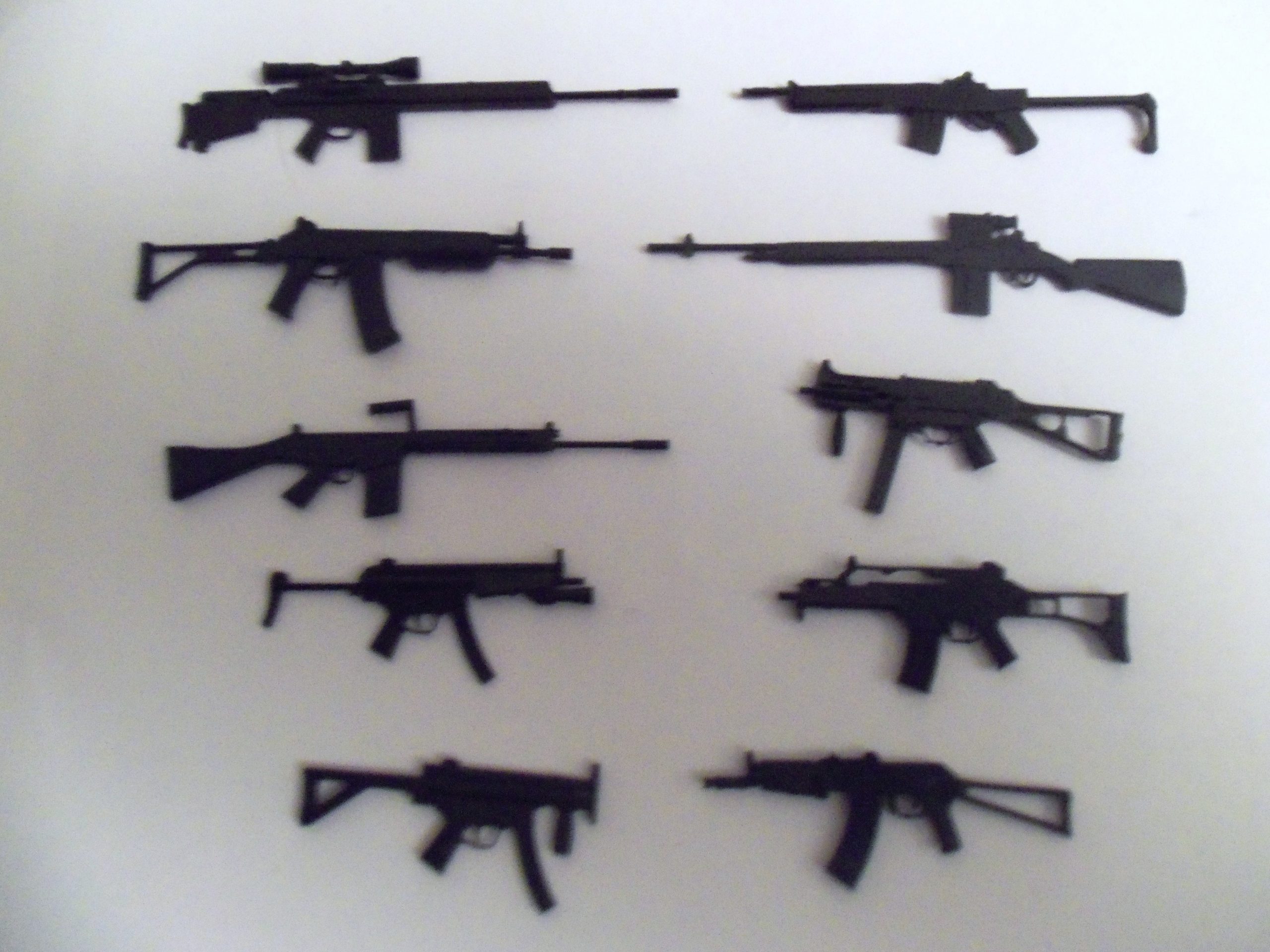 Many of you will remember our exclusive sneak peek at forum member Falcone’s Wave 1 weapon assortment back in April of this year.  If you didn’t get the chance to view Officer member Fogger1138’s review you can view it Here.  Falcone recently sent me a advanced set of his upcoming Wave 1 weapon assortment. The 10 weapon set will be available at Legionfourteenproductions.com sometime in September.  All the weapons will be  available for only $1 or less with 6 of them selling for only $0.75!

The first thing you will notice is the amount of detail on the weapons.  This set has some of the most detailed and realistic guns out on the market.  A few of the big stand outs to me are the MSG90,  UMP45,  G36C and my personal favorite the Galil.  I did the best I could with my limited photography skills and equipment to show off the weapons however no matter how many photos I took, the photo’s didn’t translate the incredible in hand impressions. The MSG 90 is one of my favorite guns of the set.  The weapon is sturdy,  detailed and has a  impressive looking scope.  The weapon looks very menacing in the hands of figure.  I found this weapon to be the toughest to photograph.  I have no issues with this weapon as it fit in the hand of every figure I tried and can easily be displayed in a shooting position.

The M14 is a very nice detailed and accurate rifle.  I’m most impressed with the detail on the trigger and scope.  My only complaint is that the weapon was very difficult to hold in a firing position.  This is nothing new for a M14 in my experience.  I have always found the M14 to be a very difficult and frustrating weapon to pose.  It might just be my lack of patience. The FN FAL/SLR is another impressive looking weapon that I predict will be the best selling of the 10 weapons in the set.  There seems to be a high demand in the community for this weapon and it doesn’t disappoint. Once again the FAL is loaded with rich detail that doesn’t translate very well in the photo. The weapon fit in every figures hand very nicely and the handle is very sturdy.  This is a more informal review however if I was giving grades on the weapons,  this would receive the highest grade of them all. My personal favorite weapon of the set is the Galil.  I have several reasons to like this weapon.  To start with, it fits perfectly in the hands of every figure I tried.  It got to a point where I was looking for a figure that it wouldn’t fit because it was so adaptable.  I tried at least a dozen figures from several different eras and ran into no problems.  Excellent pose-ability and the weapon is very sturdy.  I plan on buying several copies of this weapon. The Mini 14 was the only weapon that wasn’t part of our exclusive preview this past April so for many people this will be one of your first viewings of Falcone’s weapon.  This is another successful accurate weapon that unfortunately didn’t translate very well in my photos.  No complaints with this one at all.  The weapon isn’t a very desired one by me however the weapon fit nicely in the hands of the figures I tried and feels very durable. Another popular weapon is the G36c.  We have had several options in the 1:18 community when it comes to the G36c and we still have a demand for more.  This is a very nice addition that will fit in perfectly with anybody’s collection.  A very useful weapon that is rich in detail and can be posed in several different positions.  Another one of my personal favorites that I plan on buying multiple copies of.  One small complaint is the size of the handle is just a tad smaller than I would have liked. The UMP45 is one of my favorites of the group and will be a nice addition to my collection.  This is one of the best looking weapons of the set with it’s really long magazine,  and perfect fitting handle and foregrip. This lightweight and tactical SMG will be a favorite among the set and I personally plan on buying several copies.  Falcone’s UMP is smaller and more compact than other UMP45’s that I’ve seen released. The MP5-N is a very popular weapon that I expect will be in high demand from this set.  The small machine gun fits perfectly in the hands of all the figures that I tried and can be used with several different poses. No complaints with this weapon.

The MP5K is very similar to the MP5-N,  almost too similar.  In my personal opinion I think one of the MP5’s should have been held back for a second wave release. With that being said,  it’s still a very detailed and accurate weapon that I’m sure will please several 1:18 scale collectors.  I had zero problems getting the weapon to fit in the hands of any figure that I tried.  My only issue with the weapon is the trigger guard.  It’s very fragile compared to other weapons on the set and I actually slightly damaged mine.  Although I will say that I wasn’t being very careful with it so it’s partly my fault. The AKS 74u isn’t a weapon that I particularly had a need for,  however I came away impressed with the weapon.  This weapon was the most durable of the smaller weapons and can be posed easily.  The weapon has excellent detail and if I had to pick a complaint,  it would be that the handle is a tad too small however most buyers will barely notice. I’m extremely happy with this entire set and I have no real issues with any of the weapons.  I can’t say that all of the weapons are completely perfect,  however I can’t say that about anybody else’s product either including large toy company’s like Hasbro.  Considering the amazing detail and strong durability along with the fantastic price point,  this entire set is a Must Buy!  I will be personally buying several complete sets and plenty of additional extras of individual weapons.

I want to give a big thanks to Falcone for giving me a chance to admire,  test  and review a early copy of his Wave 1 weapons assortment.  You can discuss the set with Falcone and other members of the forum Here and you can visit Falcone’s store Here