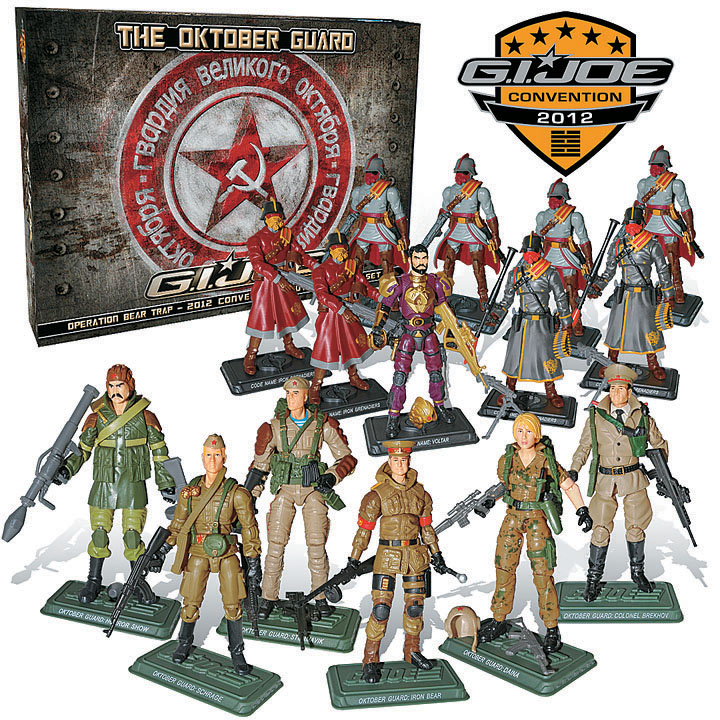 The G.I.Joe Collectors Club isn’t short on controversy,  in fact it almost seems like they thrive on it.  The 2012 exclusive Convention set is now getting a second production run.  In case you had forgotten,  this rare pricey set features the Oktober Guard which of course is the Russian version of G.I.Joe who became very popular among G.I.Joe fans of the cartoons and comics of the 1980’s.  The G.I.Joe club announced today through email to it’s members the good news.  You can read the announcement below.

Don’t miss this limited edition second-run of these fantastic Oktober Guard vs. Iron Grenadiers action figures. You must be an official G.I. Joe Collectors’ Club member to order. Visit the Club Store to pre-order before the Nov. 30th, 2012 deadline! (Product will be shipping in the spring of 2013, exact date TBD). Cost is $360 per set (plus shipping). Only boxed sets will be produced and the production run will only be what is pre-ordered. Don’t miss this final opportunity to own this highly sought after set! Check it out at GIJoeClub.com/shop. G.I.Joe Club members have until November 30th 2012 to sign up for the Pre Order only Boxed set.  This is an unprecedented move on part of the Collectors Club and at $360 a pop plus shipping,  can you really blame them?  How do you feel about this announcement?  Do you think it’s fair to the attending convention members or to the several collectors who paid outrageous prices in the secondary market or do you think the Collectors Club is finally doing the right thing by catering to the Collectors?  Sound Off Here

Previous: Customs by MSWI
Next: Medal of Honor: Warfighter Review