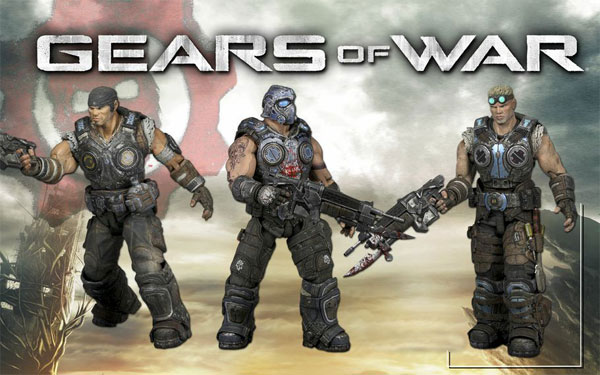 NECA released a preliminary packaging photo showing 4 figures via their Twitter account a few days ago.  This is the first released photo of the soon to be released 3.75″ Gears of War figures.  The cards shown all have the same card art however that won’t be the case when released.  This new line is boasting over 20 points of articulation,  and each figure will come with their own weapons and accessories as seen in the successful video games.  The first wave is expected in February of this year featuring the 4 figures listed below:

In the Photo that was released,  you will notice that Cole Train and Dom are in the picture.  This is the first official announcement that they are in production.  When NECA was asked how many figures will be shown at Toy Fair,  they responded with “A LOT”.  Will this line be another worth collecting?  Will customizers find a use for these figures?  Or will these figures just fade away into the sunset?  You can discuss everything NECA Here Thank You to Admin pcsguy88 for bringing the information to the forum!