The figure itself has very few paint apps. He’s molded in black with a touch of red on the right upper-arm for the arashikage symbol. That about covers it for the figure. The accessories however, have gold and silver applications. The big standout is the gold apps on the teal plastic of the harness. Blech. 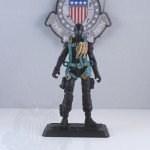 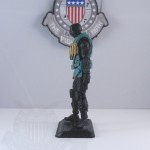 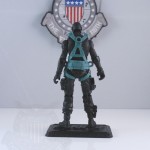 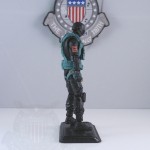 Snake Eyes is the winner when it comes to accessories in this 3-pack. The harness, which is terrible to remove, is an interesting addition, but it could have been omitted and I wouldn’t have cared. It probably requires heat and/or removing the legs, neither of which I was willing to do, which is why the harness is on in all the pictures. Beyond that, you have a backpack/sheath and two swords, two arm blades, two claw blades, combat knife, pistol with a silencer, and a pair of uzis that can hook onto the sides of the harness.

You can, though it looks ridiculous, have him stow everything. But it requires wearing the claws and arm blades at the same time. Not a very mobile loadout, really. But it’s great to have so many options for an excellent figure. 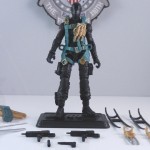 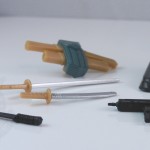 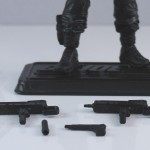 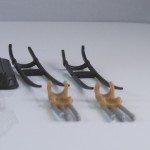