‘Ello, Gov’nor. I confess, The Governor (henceforth to be called “El Hefe”) was a complete and total impulse buy. As Hasbro had deemed it wise to leave me without access to my figure line of preference (G.I. Joe, for those of you in Rio Linda), my day was turning out utterly toyless. There I was in an area Wal-Mart and what did they have? Two display boxes chock-a-block full of McFarlane’s 4th wave of TV-inspired Walking Dead figures. Now, by all accounts I was done with the wave. I had the two riot zombies and Andrea, and by god that’s all I wanted. Now, mind you, I could have been sensible and grabbed another riot zombie or three (there were three of those helmeted bastards in that scene), but that seemed a bit of overkill. Well there’s Carl….Hefe it is then! Would I regret it? 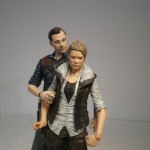 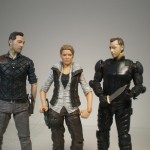