The sculpt isn’t bad, all things considered. It’s definitely apparent that Hasbro is skipping some corners on a lot of figures, though. Compared to the figures from the first Thor movie, these seem far more childlike. There is some detail work, specifically around the arms and torso with the chainmail. Otherwise, it’s a bit dull. In addition, they must have lots the rights to the sculpts of the actors’ likenesses, as this only VERY vaguely resembles Chris Hemsworth. And by that, I mean it’s a male headsculpt, with some facial hair and long blonde hair. That’s about where the similarities end. 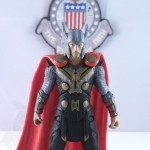 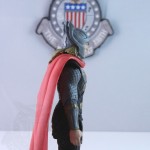 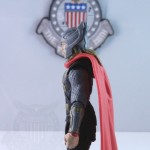 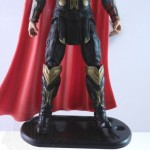 The articulation isn’t bad, but it isn’t up to the quality we’d expect from Hasbro line figures. Even Star Wars has been better in recent years, though they still retain the T-crotch that we all abhor. Thor here finds articulation in the head, shoulders, elbows, ball hips, swivel thighs, double-knees, and rocker ankles.

He is missing even rudimentary swivel wrists, torso, or even waist articulation. Those alone certainly restrict some poses, specifically in the upper body, but he still has a lot of motion available. What impresses me most is that they went with the good version of the Marvel ball-hips. You know, the ones that move without a bunch of bizarre finagling to work with the swivel thighs. Much like those used on the Amazon Renegades Snake Eyes/Storm Shadow/Ninja Viper, they move back and forth and side to side smoothly, allowing for some decent movement in the legs. Combined with the swivel thighs and ankles, it’s effective. Wasted on this figure, but effective. 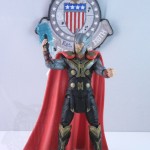 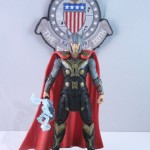