The G.I.Joe Collectors Club revealed it’s second figure for the anticipated Figure Subscription Service 3.0 today. Alpine the G.I.Joe Mountain Trooper is the next reveal. This FSS figure is based on the 2004 version of the character. We’ll be discussing all the reveals in the forums over the next few weeks.

The Club posted this on their official web site and credit goes to Officer Video Viper for sharing it with us. 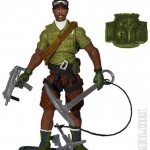