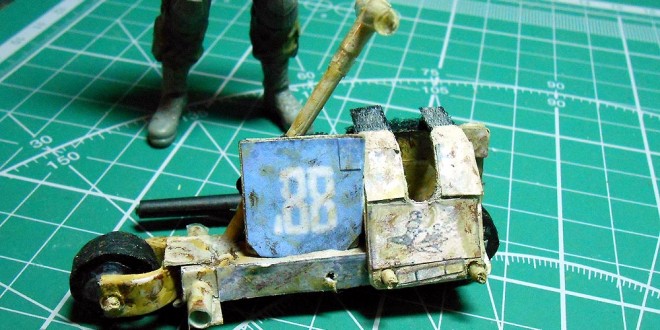 Ori Toy‘s Acid Rain World line by has proven rather popular, and a few months ago we decided to put on a contest to see who could create a custom figure or vehicle that would fit in the ARW universe.

Quite a few people entered, including forum member Hunmarine (joining us all the way from Europe), whose contest entry is the subject of today’s spotlight.

We present his custom D.U.V, aka Defense Unit Vehicle, aka “Duffy”.

“Even after so much year after the World War II, the idea of a fast deploy vehicle wasn’t disspeared. It became a thing so usual and necessery like a gas-mask in ARW.
Mostly we saw only battle machines, wich day to day fights in the battlefield to somehow save and protect the last ruins of civilization. But what about those who are behind the frontlines. Who helps out our troops of Agurts?
Medics, enginers even the last remains of postal service, who helps the soldiers contact with their homies?
These people risks thier lives every time while the on the run between bases troops and equiment and service centers right behind the frontline. And it is essential to do this ‘run’ on a – little, un-noticeable, fast vehicle.
And here comes the little D.U.V. A Defense Unit Vehicle, which is a modernised version of a British Airborne Forces vehicle ‘Welbike.'”

It’s a highly original custom and, given that it’s based on actual mini-bikes deployed during WWII, also a believable addition to the ARW universe. The excellent weathering also fits in with the whole ARW aesthetic.

And did I mention it also transforms?  Check out the pics below. 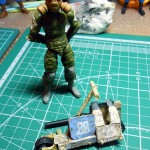 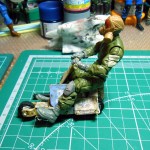 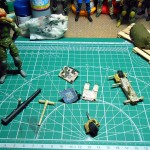 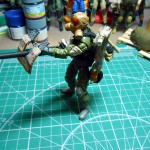 For more (and bigger) photos, head on over to his original forum thread here.  Feel free to leave a comment and let Hunmarine know what you think!