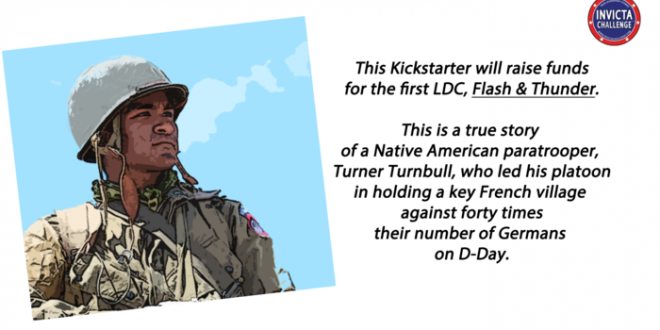 Time for another Kickstarter. Recently forum Officer The Archivist brought to our attention the new Invicta Challenge Kickstarter with figures sculpted by the Four Horsemen. As luck would have it, the creator stopped by and answered a few questions.

Some details about the Kickstarter.

Literacy experts know that if you want a boy to read, don’t give him a book. Give him a game or a comic – a book by any other name that appeals to their psychology and interests.

Extensively researched and historically accurate, our graphic novel games are based on educational research to improve boys’ reading and critical thinking skills.

Most importantly, the games allow boys to walk in the footsteps of exceptional leaders through a choose-your-own adventure style experience.

Based on a strong value system and illustrating positive role models for boys, INVICTA Challenge’s mission is to inspire boys to lives of leadership, creativity and excellence.

Boys are more inclined to read if it’s tied to an activity they enjoy, like collecting or building. Every game that we will make is paired with a collectible figure or model kit.

All the rest of the details for it can be found HERE on the Kickstarter page for the Invicta Challenge.

A sample pic of the first figure. 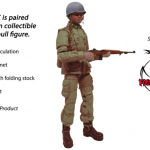 Some comments from the creator.

Thanks very much for discussing this thread. I appreciate the thoughts and questions. I unexpectedly wrote a book below.

If you can support us, please do so. If you are still trying to figure out whether you want to, you may find a rationale below:

A little bit on me – I grew up in Rhode Island, and my aunt was a designer at Hasbro. She used to take me in there all the time; I was a real toy nut as a kid. I used to see the guys making GI Joe, and their long standing promise was to put my face on a Joe when I was old enough.

At least that was what was reported to me by my aunt. What do you know when you are a kid? When I went into the Marine Corps after college, that almost happened — but that was literally as the line ended.

I have a deep love of toys in general and GI Joe in particular. After getting out of the Marine Corps, I was lucky enough to work in the industry, but on the other side of the country, at Mattel. I worked on a lot of collector stuff there, launching Matty Collector, relaunching MOTU, managing DCU Classics and so on. I even pushed for the DC line that was supposed to be four inches, but came out out at about mushy 3.5 inches, because I was a four inch fan. That was an epic corporate squabble – fighting over the right scale with my boss!

What Is This All About?

I was lucky enough to take a shot at my own company this year, and I wanted to do something that combined my passion for history, my love of toys, and my understanding of the boys’ crisis in the United States.

(If you have not heard about the boys’ crisis, I recommend reading about it. Boys are falling way behind in academic achievement and literacy in the United States.)

I think of what we are doing as a way of trying to be of service, through the free market. I do not have the temperament to be a classroom teacher, so this is what I came up with.

We are using Kickstarter, in the hope of replicating the Goldieblox experience. We are tracking well at the moment, but we need to continue to get the word out.

Answers to specific comments and questions:
[*]All the figures will be four inches. The TR is a 12 inch prototype, but we have deferred that scale until later.
[*]The Archivist mentions that Turner Turnbull and his platoon served on D-Day. In fact, his platoon sergeant on that day, was Bob Niland. The Niland brothers were the basis for the Ryan family in Saving Private Ryan.
[*]We will certainly tell stories about scientists and explorers, perhaps more than we will about military leaders. The thematic framing is to tell stories about physical, mental and moral leaders. No type of leadership exists in a vacuum, of course. One of these elements is more paramount than others, usually. For example, MLK showed great physical leadership at times, but he was primarily a moral leader. Moral leadership, of course, is the highest to attain.

[*]There was comment on cost, which I think was answered by a follow up comment. $80k would be to do two figures – Turnbull and TR. It all depends on production runs, but I am being conservative and assuming we will be on the low end for the Kickstarter. Given the time, effort and money I have spent on this project over the last year, I will lose money even at $80k. The upside is that if we can fund the Kickstarter, we have a decent shot at retail placement and making money next year. I make no apologies for that by the way. I am a capitalist with a family to support.

I welcome any comments, questions or concerns. Thanks for your time and attention, and I hope that the folks here can support us.

We would like to thank Jim for stopping by. If you have any questions or want to comment, you can find the original thread HERE. Thanks for reading!