Shelby County. That explains a lot. For the uninitiated, that's Memphis, boys and girls, aka Detroit South. If only we could trick Arkansas into annexing them...

So what you're saying is that the station he was held is likely inept?

No idea. But I am stating that crime of this type would be beyond unusual in the rest of the state. But when you hear "Memphis", you think to yourself, "Yeah, that sounds about right."

When white voting power is gone, when white hiring power is gone, we're terribly screwed. Non-whites are being taught to hate whites and blame whites for everything while whites kids are being taught to hate themselves and elevate the non-whites who hate them. Seriously, whites are still the majority in the US and they already have to deal with open hatred.

Soooo, do people of no color get to have the same if they so choose? 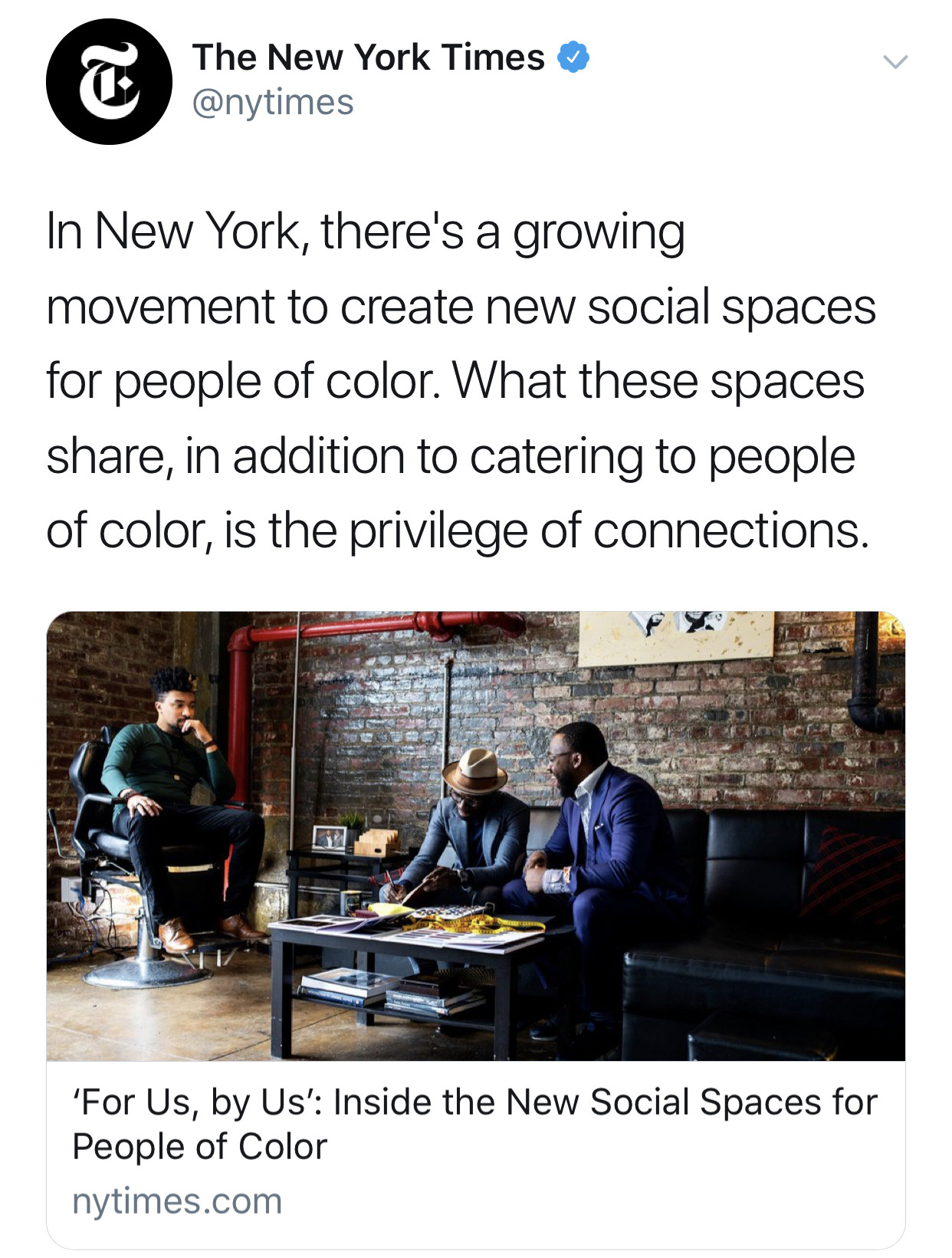 Wait, didn't we do "separate but equal" already?

But this time, they're DOING the excluding. So it's ok now. Turns out they were never against racism all along, just the kind that doesn't benefit them. Shocker.

I'd be outraged... if I gave a shit. I have no fucks to give about their spaces or valuable "contacts". This is a nothingburger.

I too could not care less. What I do care about is if some white people wanted to do the same "RAYSIS! DATS RAYSIS!!"

How long are double standars supposed to be tolerated?

f-o-r-e-v-e-r. They will never get finished beating that drum. If there exists a single successful white man, he must have gotten there unfairly, and we will use every double standard available to make him pay... and we'll call it "equality" just to rub salt in it.

Ironically, exclusion of others because of something so basic as skin color has always shown inferiority. If someone or some group is so insecure that they have to keep others away that don’t happen to look like them to feel “strong,” they are truly pathetic. This has been true of all racist exclusion throughout time. 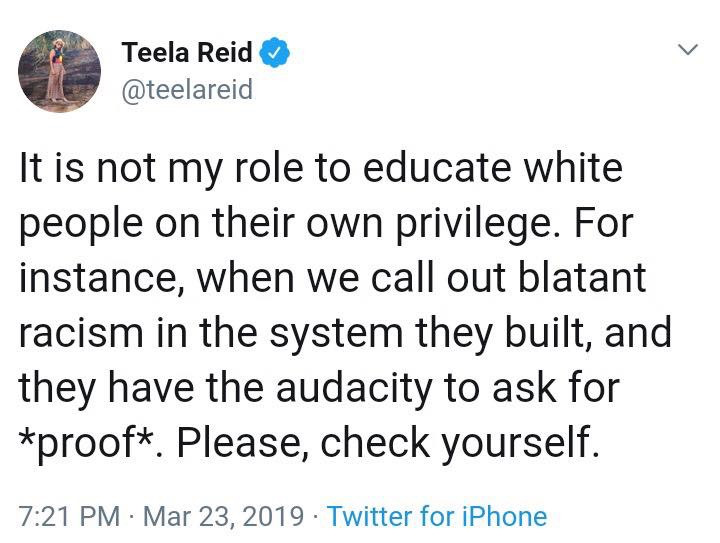 Was just coming to post that and just texted that exact phrase to my wife. This honestly angers me and I usually do not really care no matter what I type.

Think they are just letting the Feds deal with it? I stopped following the story, so do not know whatever happened with the mailed letter.

That's possible. The reason this is infuriating to us right-leaning white males is that the whole incident was designed to portray us, as a group (oh the irony), of being ignorant racist homophobes, when the truth, for 99% of us is absolutely the opposite. Truth is, I feel sorry for that a-hole. He lives a pathetic life. But this incident needs to be used to send a message that this kind of blanket labeling is what is racist and driven by hate and envy, is damaging to the culture, and will not be tolerated.
Reactions: G.I.*EDDIE

Instead it is going to embolden the blatant liars since they know they will not be held accountable.
Reactions: G.I.*EDDIE

Yep. And innocent people will get hurt.

ThunderDan19 said:
But this incident needs to be used to send a message that this kind of blanket labeling is what is racist and driven by hate and envy, is damaging to the culture, and will not be tolerated.
Click to expand...

The opposite will happen. It'll divide even further (and I suspect that that is the point). People are getting sick of the double standards. One set of rules for one group and another set for the other group.
Reactions: ThunderDan19

And yet again, mean IQ is reinforced. If you don't have the capacity for basic understanding and responsibility, you believe what you are told (repeatedly by people who have an interest in controlling you), particularly if it benefits you with some sort of "disadvantaged" privilege. That's not to say "intelligent" people cannot be indoctrinated (it happens all the time on college campuses and otherwise), but soft clay is easiest to mold.

Oh my gosh this is cringey.

When are government dudes and dudettes going to realize that this has barely anything to do with racism and everything to do people having a a keyboard or a microphone connected to the world? Wasn't a racist problem back in 2002 and yet my ears were already burning from 14yr old mouths on Xbox Live spouting shit off because they could. It's not going away people. Ever.

And THAT is exactly what Dissenter was made for. If I knew what video they were referring to, I'd check out the Dissenter comments.

Except Dissenter would not have been fun considering you can't troll people that do not oppose what you are saying. These are people trolling for shock value or maybe our government does need to go burn out the racists if all of them are real. Good riddance if they are.
Reactions: G.I.*EDDIE 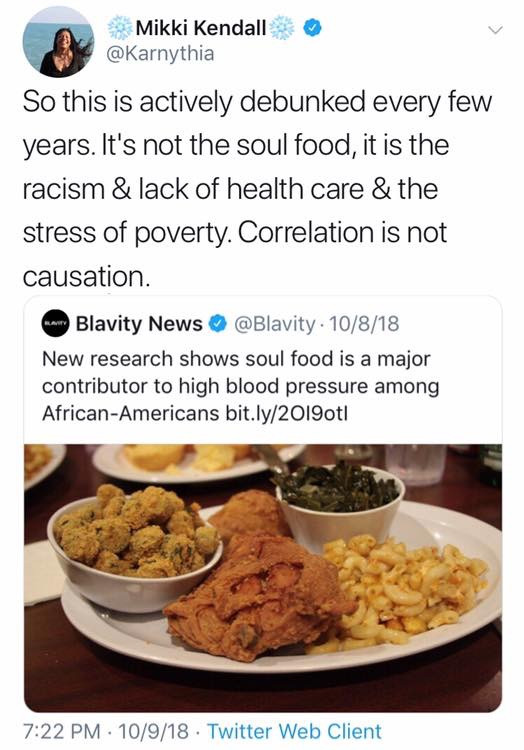 I struggle to understand why well educated, wealthy, white people would be so against... themselves. They can't possibly have that much "white guilt", especially over things none of us had anything to do with.

Do people in England still kick themselves over colonialism and how they treated, say India? Does the middle east tear itself down over how it historically treated blacks from africa? No, not in the least. Hell, Germany doesn't beat itself up over the jews as much as the left wants to perpetually punish this country for slavery.

What makes our society's historical low points SO MUCH more worthy of time, attention, and money than any other country's failings?

(Hint, I know the real answer is "votes", but what do they tell themselves in private? Do they admit it, or do they delude themselves into thinking this is actually some kind of noble endeavor?)
Reactions: G.I.*EDDIE

That's a great question: Do these a-holes actually believe their own hype? Do they believe in their cause so much that they are willing to lie, cheat and steal to achieve it? Do the ends justify the means for them in some perceived moral cause, or are they truly just the mustache twirling bad guys from the cheesy cartoons?

For the elites, at least, it's all about that powerrrrr! For the voting whites? Virtue signaling. It's - ironically - a superiority issue. They believe the position given to them by the elites (who they view as gods), is the superior, moral position. Why do they choose to believe that that position as opposed to the one that would benefit them most is the better? Because nearly all MSM and Hollywood and celebs spout off that position non-stop. The NPC meme couldn't have been more spot on. They're programmed.

I don't know if they know it's not in their best interest, but the fear of being judged by going against the grain is the more terrifying thing to them.

But I've read and heard multiple times that leftism or conservatism is baked into our brains. They may genetically not be able to help their self destructive thinking. Caring about the others more than your own children because judgement... Is there anything worse than that?

nacho said:
Do people in England still kick themselves over colonialism and how they treated, say India? Does the middle east tear itself down over how it historically treated blacks from africa? No, not in the least. Hell, Germany doesn't beat itself up over the jews as much as the left wants to perpetually punish this country for slavery.

What makes our society's historical low points SO MUCH more worthy of time, attention, and money than any other country's failings?

(Hint, I know the real answer is "votes", but what do they tell themselves in private? Do they admit it, or do they delude themselves into thinking this is actually some kind of noble endeavor?)
Click to expand...

For the average jackass on the street, it's generally the culmination of over a century of concerted effort to dumb-down the intelligence of the nation. For those insidious fucks in power, it is merely a means to an end. They'd execute every last member of their various special "protected" classes tomorrow if it would give them the unbreakable lock on power they desire. They might just do it for fun, after the whites of western European extraction, with our pesky penchant for defiance, are far too few to do anything about. Death or chattel slavery for their former "allies".

"They" (you know the ones) all think they're gonna be relaxing at the dacha on Lake Tahoe, when in reality they'll be on the collective farms or in the mass graves with the rest of us.

Yup. The useful idiots are only useful until they're not. Once they are not, under the tank treads they go! Same goes for the elite useful idiots who think they're untouchable and safe.

Funny. I first witnessed that kind of behavior when I was maybe 6 (at the oldest) at a theme park not surprisingly close to Detroit. Proximity is all you need.

Watching that video, all I can think about is, "Each of their votes count the same as mine. F#$%, we're screwed."
Reactions: G.I.*EDDIE

Man, that was ugly. I had to turn the volume down. Any clue what set it off? Surprised it took the security guys so long to show up. My experience is that they are typically very well informed and [[[ always watching ]]].

Seems like an argument and the one lady spit on the other guy.. reports say they're all the same family too. Probably just trash people acting trashy.

Thanksgiving must be a hoot at their house...

Any chance you could take your issues somewhere besides "the happiest place on earth?"

When people are raised thinking that it's ok to act that way, ever, much less in public, that's what you get. Civilization is screwed.
Reactions: G.I.*EDDIE
You must log in or register to reply here.
Share:
Facebook Twitter Reddit Email Link
Top Bottom