Not much to know at this point other than new 1:18th stuff coming from Hiya. No pics yet.

If their other 1:18 lines are any indicator, we're looking at highly articulated $20 base figures with small vehicles and deluxe stuff in the $50-$300 range. Definitely some collectors' premium pricing, hopefully with quality to match. The press release references the 40th anniversary of ARAH and making cools stuff not seen since the 80's, so this is *presumably* an ARAH-centric line. Obviously no clue if it's toy, comic, sunbow, or hybid focused. The logo used here, IIRC, is from the DTC era circa 2006, if that's significant or not. Fingers crossed for something great.

The Aliens and Injustice products look nice, but the sculpting has a distinct flavor, almost an anime quality with a Planet Green Valley/JoyToy feel. Not sure it's a fit for ARAH exactly, but I'm keeping an open mind at this point. 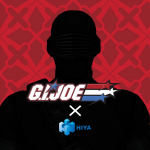 Doubt I'll be buying, but I'm up to see what they'll be offering. I have zero experience with Hiya. Do they ever make it to the big retailers, or are they just for collectors, sold online?

Really hoping its not re-hashes of main characters & that we get something good. (looks at what GI Joe Club promised but never got to.)

I wondered if anyone here noticed that announcement. Curious to see what comes of it

Yeah, I read it yesterday... but let's be honest, it wasn't much of an announcement, no figures, no narrative, no dates. It's more of a "stay tuned". I just posted it here in an attempt to get a little speculation going, see what people were hoping to get from the line, what the community would support.

Most of us here don't really *need* more 1/18th Joes, so Hiya will need to put some kind of spin on it to make them new and different enough to justify a purchase while simultaneously juicing them with enough 80's goodness to not alienate the nostalgia wanks like me. No doubt, it's a bit of a tightrope.

I would argue they need to follow the initial path of Classified, a modernization of sorts with a classic flair (minus the gold nonsense). It didn't exactly work for classified because a huge chunk of fandom wanted true classic ARAH designs in 6" form. We have that in modern form already in 4" figures, so the Classified formula could work much better at this scale, where a straight ARAH redux would be redundant.

I would be open to something like Joe-themed ARW-style figures, like a near-future, post-apocalyptic world where things went wrong. Almost like a Worlds Without End-style narrative and design. THAT would get my dollars.
Reactions: ThunderDan19

did you see the contrast altered version of the pic on the full force youtube channel? That image of SE looks pretty sweet...

Ran a quick exposure on it. 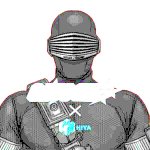