What is everybody's thoughts on the Sky Striker from Haslab. (O ring figures)

Great for thoughs who collect O ring. Not to crazy about the price, so my cheap ass is out. 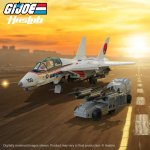 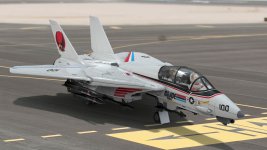 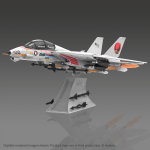 As I mentioned in the Classified thread, I backed the Skystriker, even though I have the modern/PoC/30th one and the SDCC/Jetfire version. I love the black tailfin option, the cloth parachutes, the ball-articulated stand, the flame/smoke effects for the engines and missiles, etc. And the wings and landing gear are now separate levers. Plus, I still have a ton of vintage ARAH MIB vehicles and my MIB skystriker is the Funskool version, so maybe I'll replace that one with this.

I want one just to display with all the fire/smoke bits, and I like the idea of having a stand and not trying to suspend it from the ceiling. Objectively it's nowhere near worth the asking price, but I'm going to get one anyway, mostly because I know I'll regret passing a year from now when they start shipping, photos start popping up, and they're 500+ on ebay. I've wasted more on dumber things.
Reactions: Videoviper

It's truly the best version of the SS to date - fully tricked out with full function wings/gear, lots of ordnance/hardpoints to mount it, fire/smoke effects, pilot/co-pilot, mounting stand, etc., but, as you mentioned, way too $$$ for me to consider.
Reactions: Videoviper

I backed it. Co-pilot, weapon loader, fuel trailer, stand, and all the extras... too much to pass up. Especially since I recently backed Marauder's Vietnam figures and ordered a whole bunch. I'm lucky enough to have the money to spend at the moment. But here's my take on it. If anyone here is familiar with Retroblasting on youtube, I agree with Michael about the weirdness of a big company using a kickstarter approach like they did with the Star Wars sail barge and Mandalorian ship. Hey, Hasbro... don't do a kickstarter, just make the damn thing. Advertise it as a "limited run" available only on the website or something. Showcase all the cool details to get people drooling, and just make it. If you're smart, and you make something really cool, it will sell. Then you can decide whether to extend the run based on demand.
Reactions: Videoviper

Ya, right now the kickstarter approach is a lot of profit per unit, (As they as cutting out the middle man.) Who then tries to sell it at a higher cost.

I'm for it for the "dream" projects that won't be made. But at some point they run the risk of not being dream projects. This one is to me at least, is more about testing the viability of bringing back O ring.

But I'm afraid that down the line every MASK vehicle will be a kickstarter, just because its better than trying to relaunch a brand.

V-V, what's your dream MASK relaunch? 2", 4", or 6"? With vehicles, I assume 6" is too big, but it would be a shame to not make them compatible with 4" Joes. I guess they could make 2" figures if they're articulated like Mega figures and not 5 PoA Kenner figures.

Did you read the IDW reboot? Woke and cringy.

I was never a big MASK collector, not because it wasn't cool, but I was so invested in Joe and TF when it came out, I didn't want to dilute what I added to those collections in favor of yet another franchise. There's only so many birthdays, holidays, and trips to spendy grandma's house. That being said, I would buy a big red flying Camaro in a heartbeat. The other vehicles, probably not.

I have a dream….
That one day I could help guide a Hasbro movie universe
1st a good military based GI Joe movie, near the end we learn that Cobra Commander‘s gun is Megatron teasing a bigger universe. Autobots we are told are the “bad guys”

So a mask spin-off is based on TF tech, modern cars, possibly kind of fast & furious like ( never actually saw those films)

I have plans to include Jem, MLP & whatever they dare me to include in a way that makes sense in a movie format.

Assuming the movies are relatively successful, then & only then do we get the crossover we deserve!

I don't want to be a wet blanket, but that's basically the plot of all of IDW's hasbro comics from 2007-2018. It was a hot mess of the highest order. It successfully convinced me that Joe and TF (and the rest) absolutely have no business being in the same narrative universe. I no longer want any of them to crossover ever again. Ever.

Here's a summary. The TFs wiped the floor with everything human, but the humans captured a few TFs and formed an alliance with Thundercracker and his pet dog. Except Thundercracker didn't want to be a part of the war, as his passion was writing poetry and screenplays. Megatron turned good, Arcee was an abused transgendered assassin that hated everyone. The dinobots had strong opinions. Soundwave only wanted world peace. Prowl was basically the biggest villain of the whole universe. The Joes just had meetings that felt like the galactic senate scenes from the SW prequels. MASK went woke and made Matt Trakker a black kid with an agenda.

Then they threw in a James Bond wannabe Action Man and made ROM (without his supporting cast b/c it's owned by Marvel) tied into cybertronian lore somehow. Unicron came and went, but it was just a planet-sized puppet controlled by a mean dwarf living inside, and he decided not to eat everyone because of a feelings speech made by Prime. Rodimus and his crew time-traveled and interacted with parallel universe versions of themselves, not in a cool way, but in more of a "I wrote myself into a corner and parallel timelines are my Bobby-Ewing-in-the-shower way out". Ultra Magnus was just a giant battle armor suit for a tiny robot on a power trip, and Cyclonus and Blaster's tape Rewind were a gay couple. And some Micronauts showed up because....licensing!

You've never seen a bigger steaming pile of shit. I have PTSD from reading it, and writing this post has triggered it. I need to go lie down.

Yes but if I wrote it it would be good

No slight on your skills, but I don't think it's possible. Just too many personalities, too much disparity in power levels, etc. Space robots and grounded military fiction kinda don't mesh without one or both of them really getting out of their lane. The IDW writers pretended their progressive agenda was somehow giving the fans what they wanted... and it was like being in a woke fever-dream you couldn't wake up from.

I won't argue with anyone making the case that a Joe-scale Skystriker isn't worth $229... because that's a lot of jack no matter how detailed and accessory-laden it is.

However, it's hard to look at these pics and not be impressed. The stand alone makes me want one, being able to put this thing on a shelf in a flight pose is pretty badass. 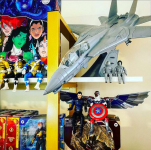 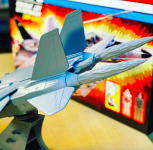 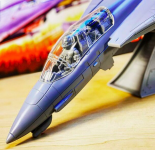 I also find it odd that Ace's co-pilot wasn't given a proper codename. Maybe he's just a greenshirt, but when has the Hasbro team ever shied away from inserting a new character into the lore, especially one who can trace his roots back to the '83 Skystriker box art?!

If they don't give him one, I'll be assigning him the name "Tailhook". It's an appropriate moniker for the backseat guy in a jet that lands on a carrier, and in my world, it'll be a double entendre too b/c he'll definitely be a ladies' man.

I know its just me but shouldn't the co pilot be wearing the same thing as the pilot?

I think 2 -3 troopers can't actually hold on to the back of the bumper either, what do I know?

I also had that thought! Why does the pilot get a spacesuit and the copilot gets an open-face football helmet?!

I think I'd protest if I were Tailhook.

I know the numbers have slowed to a crawl, but I really hope it picks up steam at the end like most other haslab projects. I really want that nightforce Ripcord.

There's no rhyme or reason to piloting in GI Joe. On the show Ace had a more conventional aviator helmet and mask. Slipstream had the whole kit... except for the O2 mask. Similar with Ghostrider. And the rest of the Joes flew their SSs with just a radio headset and no helmet (most of the time) or O2 mask. They might as well have just left those off and just touched their ears like Marvel

The only time Ace's space suit/bubble helmet made sense was in the episode they retrofitted the SSs to go into space (and, of course the whole team got spacesuits that were different from his actual one, go figure). Did I actually just say that "made sense"?

...but no less so than Fatal Fluffies, hypnotic rock bands and conch shells, and an island filled with giant preschool toys run by a fat manchild.

Very, very true. If there's one thing the Joe cartoon was, it was... creative. I'd argue significantly more creative than the comic most of the time, but also significantly farther from reality as well. But, it was certainly the gateway drug it was intended to be to bring kids into the Joeverse...

It's funny that, even while trying to track down that episode to see if my memory hadn't failed me (again), I had a, albeit brief, moment of, "Gee, I should start DVRing the cartoon again." But then my logical mind told me I'd probably never watch them anyway, and that I would be cringing way too often again if I did.

Will that little taste stick in my brain and come back to me tonight (like Catcher in the Rye to Jerry in Conspiracy Theory) when I'm getting ready to nod off and have the remote in my hand? Only time will tell if the addiction/programming remains...

This summer, I did a rewatch of all the minis, season 1 and most of season 2. Still gotta finish that. It's no more or less goofy than 37 years ago, but it was great background TV. I knew every word that was about to be said, every joke, every one-liner. As you'd expect, some episodes hold up better than others, but it was fun.

If you sit there with a legal pad and try to find everything that is impossible or goofy, then it'll be a miserable slog. But going into it with no expectations other than a little nostalgia injection, it's a great watch.

And I would argue that the sunbow cellshaded animation is superior to any cgi show made today.
Reactions: ThunderDan19

I wonder if it's really that much larger of if this is just camera perspective trickery. In other photos, it seems just as joe-scale as every other skystriker, but here it clearly appears bigger. 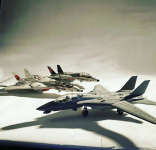