Gun grab, the 2nd Amendment and other Gov't hijinks

Are those guys old enough to own guns?

Nah, it was a pretty good summary of how we got here, primarily reactive politicians supported by pathologically empathetic people who "have to do something" (that usually only ends up only affecting law abiding citizens) every time a bad person does something really bad with a tool used lawfully 99.9% of the time.

I feel like he was playing up the fact he still "needed" hearing protection considering he discloses towards the end that "they" are a manufacturer. Still, the fact a silenced 9mm is still over 100 decibels is a real jaw dropper to anyone (me) whom has never used one. I thought the internal baffles stopped the crack of the sound barrier leaving you with a pop and the sounds of the mechanical parts banging around.

The ammo has a lot to do with the sound. Listen to subsonic vs supersonic ammo. Big difference. I cued it up to start at the relevant point.

Nah, if you want "silenced" shooting, you pretty much have .22 (lr or short) and/or subsonic ammo (degraded performance). I think .300blk is supposed to bring that to the AR platform, but it is still pretty niche. Anything that will do the job like the loud guns do is... gonna be loud (at least from the SB crack). That's part of why I never really pursued it. It'd be nice, but the benefit certainly does not outweigh the cost/inconvenience, at least for now. And recent trends have the likelihood of suppressors being removed as an NFA item stalled indefinitely.

That subsonic ? ammo did sound a lot quieter.. though still loud.

Anything supersonic has the boom/crack, depending on the shape of the round.

I saw that.. did they release a motive or anything yet?

Saw that. I’m fairly certain a good many congregations around here have armed parishioners as well. Not so easy when you’re taking return fire, now is it?

NSA said:
I saw that.. did they release a motive or anything yet?
Click to expand...

I was listening to the area talk radio yesterday, and it sounded like the guy was a head case and life-long fuck-up. We used to have asylums for his type. 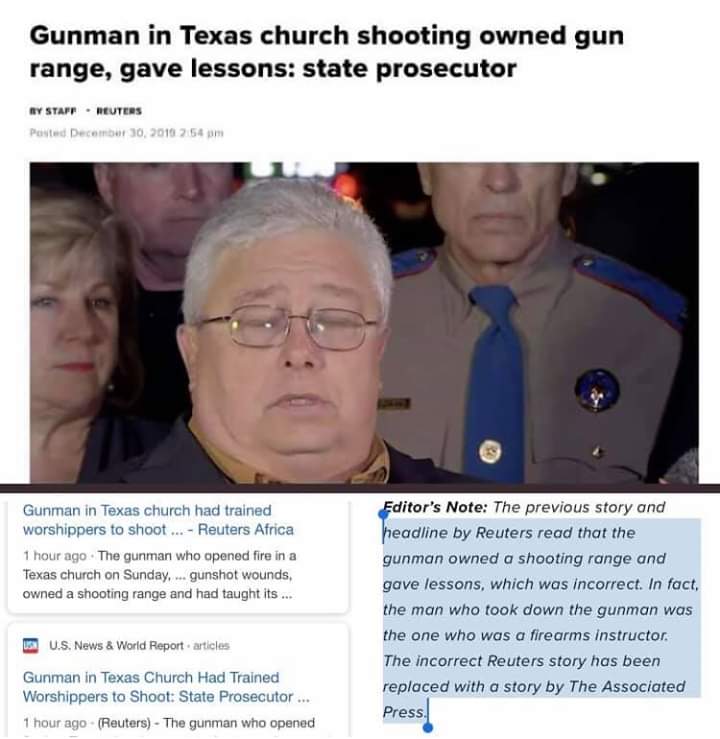 It's insane how the story vanished as quickly as it appeared.

The ”unbiased” mainstream media has no interest in the truth that guns can be just a protective as they can be harmful.

I also feel there is some, I don't know, responsibility or something on behalf of the consumers. No one is googling or searching for more info on some asshole who tried to shoot up a church and mostly failed. If he'd killed 100 people or something, then there would be a huge interest level.. but we tend to just shrug and move on if there isn't some impressive body count or other "interesting" circumstances.

Let's hope he's got some influence here in VA to keep things from getting really stupid and ugly. Thank God the demonstration today seems to have been well attended and went of peacefully.

ThunderDan19 said:
Let's hope he's got some influence here in VA to keep things from getting really stupid and ugly. Thank God the demonstration today seems to have been well attended and went of peacefully.
Click to expand...

The media was surely building it up to be a NAZI rally.. and almost chomping at the bit for it to get violent.

My issue is that there absolutely WERE "neo-nazi" white supremacist dudes there, along with, what I am sure are very nice people. Then the irrational left lumps everyone together and anyone marching with a neo-nazi is also a nazi, even if they just had shared cause.

Well, if there were any neo-nazis there, they most certainly were not invited, and may well have been planted by the opposition. Freedom loving gun owners have nothing in common with them. Today's demonstration is a huge outpouring of support by legal gun owners (now threatened by proposed draconian anti-2A legislation) to the VCDL, who lobbies senators and delegates each year on lobby day, to support gun rights legislation and oppose anti-2A legislation. It has zero to do with any other political agenda whatsoever.
Reactions: Sgt301

I’ve never heard of the place, but have a sneaking suspicion it’s associated with the rapper Tech N9ne.

ThunderDan19 said:
Well, if there were any neo-nazis there, they most certainly were not invited, and may well have been planted by the opposition. Freedom loving gun owners have nothing in common with them. Today's demonstration is a huge outpouring of support by legal gun owners (now threatened by proposed draconian anti-2A legislation) to the VCDL, who lobbies senators and delegates each year on lobby day, to support gun rights legislation and oppose anti-2A legislation. It has zero to do with any other political agenda whatsoever.
Click to expand...

I'm looking for the videos, but there were some I saw where "Proud Boy" members were there marching. They had on cheeky "RWDS" aka Right Wing Death Squad patches.

You really don't have to look far or hard at these rallies to find people, at least sympathetic to racist causes and/or I dunno, Nazi Germany-enthusiastic.

There are, I am sure, a lot of nice well-meaning people, but you have to acknowledge there are bad people/crazy wackos there too. I also saw there was a Black Panther (not the superhero) contingent.. which makes sense, ALL people should be for gun rights..

But Jesus Herbert-Walker, Texas Ranger Christ on a Cracker.. some of these doofuses walking around in full battle gear look ridiculous.

The national news would have us believe there was an army of police in full riot gear.

Yeah, there’s always the yahoos that show up all kitted up. (Well, gee howdy! Finally an event to dress up for!

) . A buddy from work went this morning and saw some donkey carrying a .50 cal (in case he had to take out an Antifa car?

). And there’s always the extremists that show up (or get planted) and (naturally) immediately get found by the biased media, who then try to characterize the whole event from the outliers that represent less than 1% of the people.

What is really telling is that there were ZERO riots, ZERO arrests, ZERO neglect discharges and a fully peaceful demonstration, despite the pro-2A community showing up generally pissed that the new VA gubment is threatening to categorically revoke Constitutionally guaranteed rights. And I’d bet downtown Richmond is probably cleaner for having had this event than it was prior. I’d bet this was a low crime day for Richmond. What Antifa, Occupy, Environmentalist, Amnesty or any other leftist demonstration can claim any of those? And that’s all you need to know about the actual kind of people who attended.
Reactions: Sgt301 and NSA

It is a nice contrast between this and an antifa rally. No wonder the cops kept things light.

Quite a few more pics here (even .50 cal gun guy

PHOTOS: Scenes from the gun-rights rally at Capitol Square in Richmond

It's actually quite amazing that you can have thousands of (loaded) scary guns all in that small area and absolutely nobody had so much as an oops. That is a testament in itself as to the quantity (that was only a fraction of the total number of law abiding gun owners in VA - many of us had to work) and quality of 1.) who the donkeys in the VA government would have to try to disarm and 2.) the restraint being exhibited in the face of threats and intentional mischaracterization. There were quite a few there that looked fully armed and dressed to go to battle. And that is with all the people who wanted to actually enter the fenced off capitol ground fully unarmed because of Northam's "state of emergency."

I heard this morning there was one arrest. Some woman who refused to remove her mask when directed by LE. There's always one idiot in the group I suppose. It could have been a lot worse. I'm so glad the anti's decided to sit it out. No good would have come of it. It was also good to see some folks I wouldn't otherwise agree with there demonstrating for 2A rights. It truly does affect everyone.

RWDS is about as much of a real thing as the "okay" hand gesture being a white supremacist thing.

I saw that. We (the people of VA) are pretty much counting on our sheriffs standing up the way he is. Heck, the Culpeper county sheriff has suggested he might deputize citizens if necessary to not have to take away their guns. My gut feeling is that it will go something like this. The current donkey gubment will pass a certain number of bills, most of which will not be nearly as draconian as they started out, and most of which are reasonable issues like background checks for all non-family gun transactions and strengthening laws to help LE be able to remove guns if someone has a history of mental issues or violence. IF they have the guts to follow through and try to take away scary guns and magazines, it'll only be enforced in cities or state jurisdictions, and much will be grandfathered in.

Can you explain more about what laws this march was protesting? Are they already on the books or just being discussed?

Nothing has yet been fully voted upon and signed by the governor. Here is a list (I unsuccessfully tried to find something more concise that didn't completely water down the items). Go to the Bills We Oppose and Bills We Strongly Oppose toward the bottom:

Gov. Blackface and his cronies can take a flying leap, at least for another year.

So did the Dems vote it down?

I believe it was 4 dems on the committee reviewing it that defected.
Reactions: pcsguy88

It's nice to know I live in a state that's actually trying.

Since the R's have a supermajority in both houses, I see no reason this won't sail right through.