Hasbro gets the master license for The Ghostbusters

I have thus far avoided non-LEGO GB product. Not sure this news will change that, but whatever. Might net us an 1:18 or 1:12 Ecto-1? They might hook me if they do The Real Ghostbusters stuff.

Used to watch that cartoon every weekday. Good times!

1:18 stuff would be nice, but we'll probably get 5POA shit. Wasn't Ghostbusters a Galoob brand back in the day.

And holy shit why is Galoob still in my brain. They made MICROMACHINES!

OMFG I REMEMBER THESE (also Galoob) 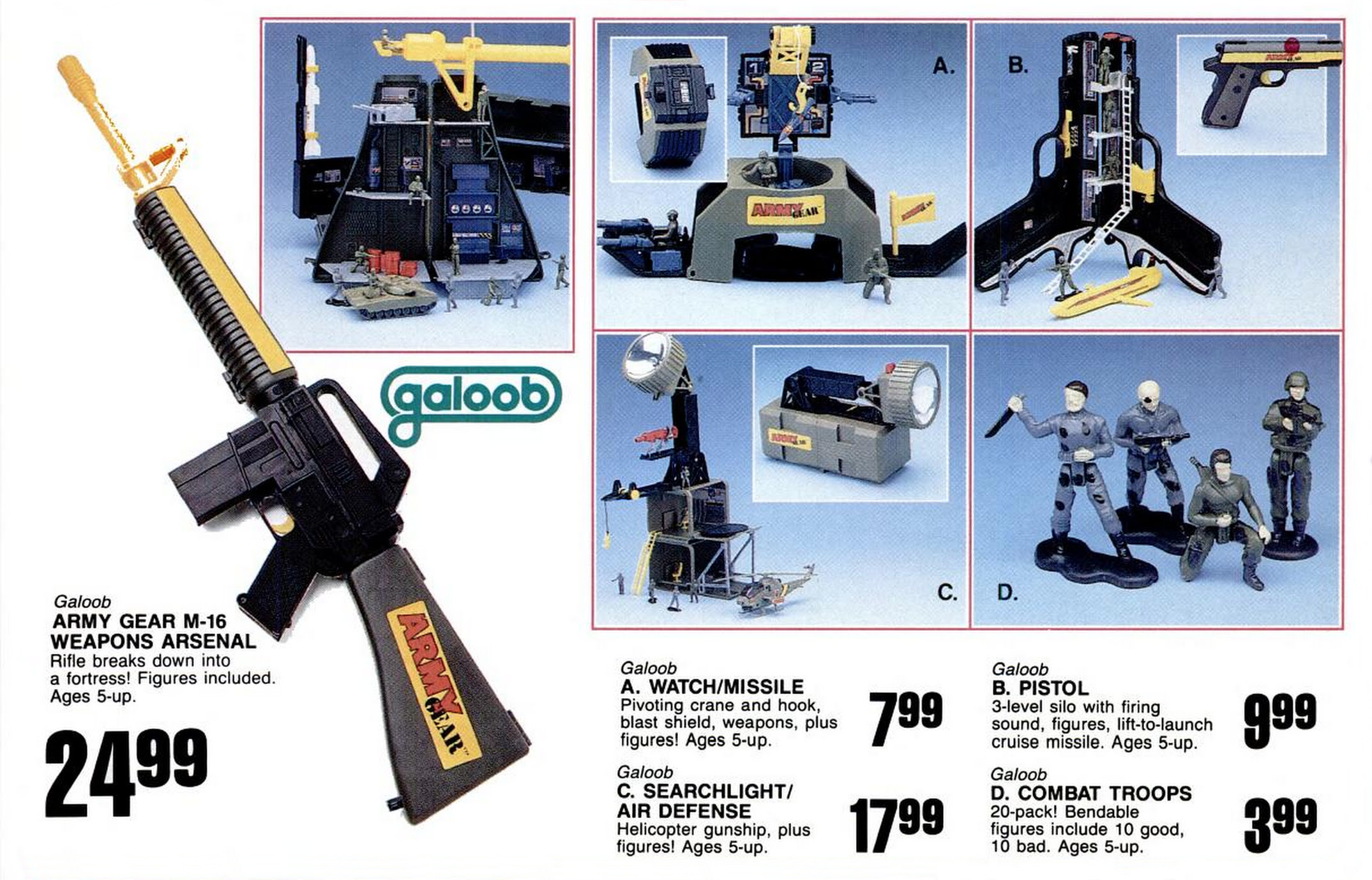 ARMY GEAR! Could you imagine trying to sell these today? I used to bring mine to school!

Whoa, those are pretty cool. I played with my fair share of Micromachines, but never saw that military line.

I feel like they came out in 1988 and may have only lasted 1 year. I had almost all of them though, as I was 8 and these were right up my alley. The little army guys were probably about as tall as a LEGO guy but skinnier.

You could 'use' most of the stuff too.. the canteen held water.. the compass more or less worked as a compass. I don't think the guns did anything though.. but I'd run around "playing guns" as kids did in the 80s and then you could break them down and play army men.. fuck now I'm nostalgic as fuck.

I’m old enough to remember when toy guns were all dark green (no bright colors) and had a rattle kit when you pulled the trigger. Had lots of fun playing “big people” GI Joe or Star Wars or Army back in the day.

I had this Uzi.. and it had the rattle kit! 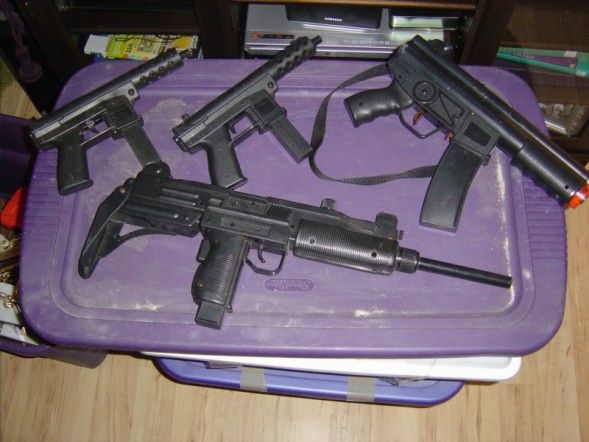 Can you even imagine kids running around with these now!!
Reactions: Videoviper

Edison was our go to cap guns with their Supermatic cap strips that you could link together. My pride and joy was the real world Snow Job rifle. 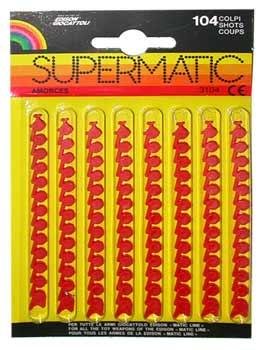 The pistols even had mags to load the caps into:

Those were great until they switched to crazy color patterns.

When did everyone go crazy with 'anti-realistic' guns anyway? I feel like it was the early 90s, along with the ECO Force GI JOES and all that crazy nonsense.

Parent groups made them change the colors like 90s Joes. Police were ok with not mistaking a toy gun for a real gun so people backed that crap

Hmm seems like 1992 maybe, when they forced them to include the orange tip or wacky colors.

I mean it makes sense, some of the guns we had were realistic enough to rob a bank with! That being said.. I don't think it was really a problem when I was growing up.

I’m sure it had something to do with Boys in the Hood mentality and black teens getting shot.

I still have my all-green rattle-when-you-pull-the-trigger M16. No pansy-ass orange tip for me!

It's at my parents' house. My son plays with it on occasion, but his generation doesn't have the "play guns" or "play army" mentality we did. I spent so much time in the woods, climbing trees, building forts, shooting at cobra spies. It was serious business in the summer. I treated it like a job.

And yes, I took that baby to school. 2nd grade, I was a soldier for halloween, and I proudly carried my weapon to school without a second thought. No one said a word... because it was back in the day of common sense and nuance, when people understood the difference between a little kid pretending and a nutjob with evil on his mind.

Hell yeah, Entertech was the best! My buddies and I would have 6-8 person sleepovers in middle school, choose up sides, and have water-gun wars until all hours of the night. It was the best thing ever, you know, until we discovered cars and girls.

I had this one:

That’s the one I had too. It’s funny how you describe playing army since that is a perfect picture of my childhood in Washington. I wonder if it‘s growing up in the woods on the outskirts of civilization or if it was just being a boy in the 80’s.

I think it was the zeitgeist at the time for boys our age. Even when I visited friends and relatives, i.e. city kids, they had the same thing on their minds. Gotta play war, even if it's in a tiny yard! And our parents thought it was normal because they spent their childhoods playing cowboys & indians.

But my grandfather's generation.... shit, they didn't play. When he was 12, he was using real guns to hunt for food. I've heard all the squirrel and frog stories. The best was when he got a .22 rifle for x-mas when he was 11. But they were poor farmers, so he had to wait until his birthday in May before he got any bullets. That had to have been the longest five months in the history of time.

Yep, back when society still had some remnant of rationality. I remember there were a couple incidents where ghetto kids pointed realistic air/play guns at cops and got real bullets for there trouble. I believe that was in the late 80’s/early 90’s. That sealed the whacky color/orange tip requirements. As usual, people living too many atop each other causing the whole country to have to change...

Interesting article.. it's more recent, but curious it's still an issue:

Toy guns mistaken for real across U.S. – The Denver Post

Of the 86 fatal shootings involving imitation firearms since 2015, the most common theme was mental illness: 38 of those killed had a history of it, according to their families and police reports. Fourteen of the calls were domestic disturbances. Ten others began as robberies. The remaining circumstances range from patrolling neighborhoods to serving arrest warrants to making traffic stops.

Of the people killed, 50 were white men. The oldest person killed was Robert Patrick Quinn, 77, who was fatally shot in Pittston, Pennsylvania, as he rode his motorized scooter outside an apartment complex while waving a realistic-looking pellet gun.
Click to expand...

I suppose BB/pellet guns are a little different.. maybe Airsoft too? Realistically how would a cop know what you have, even in a perfect situation. The kid/person with the fake gun is probably waiving it around a lot more cavalier too since they KNOW it's fake, which would appear to be brandishing a real gun wildly to a cop..

Now why wasn't this a huge issue in the 80s? I dunno. We're all just super afraid of everything now?

Wondering how many of those 50 white men had airsoft guns?

pcsguy88 said:
Wondering how many of those 50 white men had airsoft guns?
Click to expand...

Police recovered a wide variety of the weapons in the fatal shootings, but almost all had one thing in common: They were highly realistic copies of firearms. Of those, 53 were pneumatic BB or pellet guns that fire small-caliber metal balls or pellets. An additional 16 were Airsoft guns, which use compressed air cartridges to fire plastic BBs. Thirteen were replicas, two were toys, one was a starter pistol and one was a lighter.
Click to expand...

16 out of the total were airsoft. Do airsoft guns seem like more of a rich kid thing? I don't know that I ever had a proper "BB" gun in my life. I did/do have a ton of airsoft guns though.

What the heck are people doing waiving around 13 REPLICAS? Seems like some of these had to be using them in a menacing way.

I LOL'd at the lighter.

Airsoft is definitely a middleclass white thing to do. Guessing those BB guns are the CO2 type pistols found at every Walmart in the land. I do not understand why anyone of any color would wave anything around that even resembles a gun once the police are within visual range, but then again I also have never wanted to suicide by cop. The only ones that make sense are the attempted robberies with fake guns.

Yeah, mental cases where they are doing it on purpose/or doing it out of their control.. and actual bad people using them to commit crimes seem the most likely.

I am sure there are a handful of people just minding their own business or playing or whatever and someone calls the cops on them and something happens and BLAM. Would imagine the cops would feel bad in some of the cases.