Odds they had to do a crash landing and burned the plane to destroy sensitive evidence?

Hopefully we get real reports. Taliban says everyone died.

“As per our information, there are four bodies and two onboard were alive and they are missing,”
Click to expand...

Assuming anyone survived it, it'll all come down to who was on that plane, how valuable they are and what they know that we don't want enemies to know. If it was confirmed by drone/satellite that all aboard were killed in the crash, it likely is not a serious priority to control the site, particularly if they are already allowing for the return of the bodies. If they were concerned about what was on that plane in terms of tech or information, it likely would have already been struck by something very large and explosive, or SOF would already have set up a perimeter around it with massive air cover to keep the enemy at bay. Most likely a plane like that was carrying an executive level officer or two, who, if they were actually captured alive, would likely already be showing up in video from the Taliban.

The fact that it's Afghan forces trying to reach it implies it's pretty conventional and the passengers did not survive.

Yeah. Says the plane was used for local communications in remote areas, so not likely the most sensitive of spy planes or personnel.

Are we all already dead?

The 33-year-old took part in a training session at his workplace last Tuesday which also included an employee of the same company visiting from China, Andreas Zapf, the head of Bavaria’s office for health and food safety told The Independent.

The woman who was visiting had not previously shown any symptoms and flew home on Thursday.

However, she went to a doctor after feeling ill on the flight and tested positive for the new virus.

The woman lives in Shanghai, but had been visited a few days earlier by her parents, who come from the worst-affected Wuhan area.

The German man, who lives in the Starnberg area south of Munich is in isolation as a precaution, officials in Bavaria said. They said his condition was good.

This all comes as the United States and several other nations prepare to airlift citizens out of Wuhan — the epicentre of the disease that has killed more than 100 people.
Click to expand...

A former federal law enforcement officer, accused of having a sexual motive for smelling a girl's dirty underwear in her bedroom, will be allowed to serve unsupervised probation.

While his real estate agent was in another room, Moon went inside a 3-year-old girl's bedroom, according to a police report. He focused on the laundry hamper in the corner. He dug through the dirty laundry and pulled out what appeared to be the girl's underwear.
Click to expand...

Video shows, Moon appeared to hold the underwear close to his face and appeared to smell them. Minutes later, he returned to the bedroom for a second round with the preschooler's clothing. When he leaves the room for the second time, he appeared to notice the nanny cam. He quickly covered his mouth and said "goddamn it."
Click to expand...

According to the police report, a girlfriend said Moon heard police were looking for him, so "he threw out his computer" and his Gmail account had a video of "girls doing gymnastics" in an email from "him to himself."
Click to expand...

And he got off with a slap on the wrist.. I wonder how many other times he's done it too.

YES!!! If we have any British members or lurkers here, CONGRATULATIONS! You chose democracy over leaving your country's future in the hands of unelected, unaccountable, and unremovable bureaucrats. Things may be a little shaky now, but you'll be much better off in the long run. 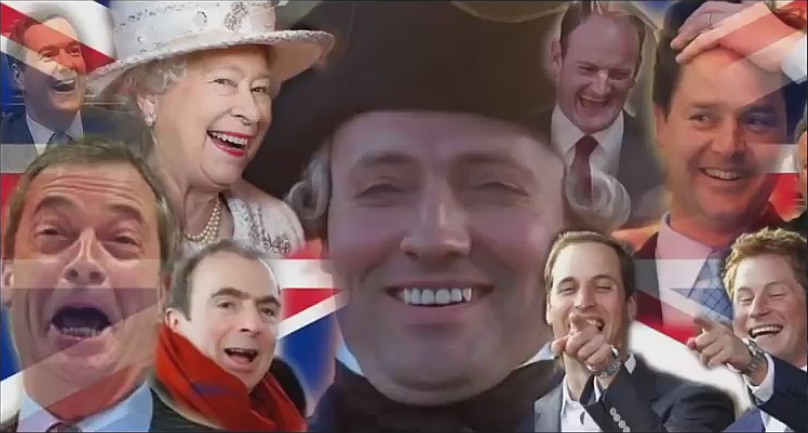 nacho you have some 'splaining to do!

What, Memphis is on a fault line. That's common knowledge... except that it's not going to fall off into the ocean, sadly. Maybe the earth will just swallow it one day.

Get woke, go broke... hell, even the black people think this is a bad idea.

I'm mostly stunned they didn't rewrite them to make the characters black. That's what hollywood does. Fictional Appropriation?

A free, unthreatened, prosperous and/or welfare protected state’s people have nothing better to spend their energies on apparently.

nacho said:
What, Memphis is on a fault line. That's common knowledge... except that it's not going to fall off into the ocean, sadly. Maybe the earth will just swallow it one day.

I felt the Tennessee quake working graveyard shift about 10yrs back. Everybody was looking around not wanting to ask if anyone else felt it. Just a sense of sea sickness and a slight wobble of the monitors.

nacho said:
What, Memphis is on a fault line. That's common knowledge... except that it's not going to fall off into the ocean, sadly. Maybe the earth will just swallow it one day.


I feel like you've been keeping things from me...

With the rivers rising, does the River Pirate attacks increase?

We had 3" of rain yesterday, no biggie. Sure, things are wet and the creeks are flowing, but only low-lying areas are affected by "flooding". I've driven 100 miles today without incident. A few schools closed, those who have a lot of bus routes in the low areas, but it's not like the world has stopped turning. Everything is operating as normal, and everything will drain by tomorrow. Carry on, nothing to see here!

You sound like my mother-in-law. She watches mexican news (which sensationalizes far more than our sad media), and anything that happens north of Louisiana, we get a phone call... we've threatened to buy her a map!

Wtf I was told on good (nacho) authority that Nashville/TN was safe!

Historically that's quite true. East TN is safer though. The valley and mountains tend to break that stuff up.

Still, it's a fluke occurrence even for Middle TN, not like Kansas or Oklahoma where losing 19 people to a tornado is called "thursday". How many people did Cali lose last year to earthquakes, wildfires, and mudslides? I'll take my chances with the stealth tornado.

5 deaths from wildfires, I doubt any from earthquakes, and I don't recall any mudslides last year.

Of course if a big quake happens it'd probably be bad, but it's been a while.

Crazy though and tornadoes seem a lot scarier than some ground shaking or fire that you can see coming!

If you move, prepare for your wife to wet herself when those air raid sirens go off. In my 30+ years in Kansas we have only had to seek shelter 3 times and none of them hit within 5 miles.

That alone tells you something. Tornadoes are rare enough that there are no air-raid sirens here. No doubt, Nashville took a lick, but it was a freak event, not a pattern. This isn't like New Orleans standing around saying, "Man, I can't believe we got flooded again!"
Reactions: Mistermarks101

WTF is going on in Michigan?!?

I wonder if Eddie had his tickets for the Testicle Festival... bet he's bummed.

He's probably bored with Ford being shut down.

I was just thinking we had the country pretty well represented N/S/E/W until he abandoned us. With both he and Ewok MIA, we've got nobody reporting from the great frigid north, right?
Reactions: NSA

I chatted with Eddie the other day to see how they're getting along during this mess. I think his exact quote was, "Everyday is a lazy Sunday now." But I don't know the status of Michigan in general. He needs to come back and report.
Reactions: NSA

That's true... maybe we need to hire a Canadian to be our friend, to get the far north view on things

Man.. lockdown with no kids and just a hot wife.. what a life that must be!