Never watched that one for obvious reasons.

This is pretty amazing for a fan film.

I love me some Battle: LA and watch at least part of it every time I see it in the guide. I’ll take it over ID4 any day as my “aliens attack” flick. And yes, the epic soundtrack is in my regular playlist on my phone. I love the portrayal of the marines, their equipment and interactions in battle. Only wish the Osprey had been fully integrated at filming. Those old Sea Knights remind me how undersupplied the USMC has historically been. Nice to see them with some of the best new hotness lately.
Likes: G.I.*EDDIE

That scene with the LAV gives me wood every time. That’s what I’m buying with my lottery winnings, arming it with an automatic paint ball cannon.

(And I fully realize they weren’t qualified on it) But I just wish they’d have opened up with the Bushmaster, at least for a few awesome rounds of 25mm HE. Would have been even more epic...

Yeah, Battle LA is/was awesome. So much just badass. A few little dumb things here and there (the we support the troops in the shops in supposed LA is laughable). Really noticed how not LA it was this time as someone who grew up/lives here. Otherwise it was all very solid. Wish it did better so we'd get a sequel. They should have let off the shakeycam a bit.. I get they wanted the Fallujah look but it's annoying for the first 30 mins.

Watched Gone with the Wind last night. I am surprised that I never saw it. Lots of "oh shit you can't do/say that anymore," it was fun to watch but not something I would turn on again.

NSA said:
Yeah, Battle LA is/was awesome. So much just badass. A few little dumb things here and there (the we support the troops in the shops in supposed LA is laughable). Really noticed how not LA it was this time as someone who grew up/lives here. Otherwise it was all very solid. Wish it did better so we'd get a sequel. They should have let off the shakeycam a bit.. I get they wanted the Fallujah look but it's annoying for the first 30 mins.
Click to expand...
You know, a sequel crossed my mind as well, but then I decided maybe it is better off left alone. It's cool in concept, but I could see H'wood somehow screwing it up, and then diminishing the original. Anything moving forward would need to be relative to the new world developed in the movie. Thereby, it would be created by the writers/director - always a tricky thing if not handled perfectly well. They would need significant military advice, but also strong representation by futurists on how the military/country would develop weapons going forward. I'd have to think, with the losses from B:LA, there'd also be a less trained/equipped (drafted) militia that would have to close the gap. That could be interesting, but only if done well. Combining in new/captured technology would also have to be handled properly. That's a lot of balls in the air.

G.I.*EDDIE said:
Shape of Water. Um, weird.
Click to expand...
Yes, yes it was... I did a review on it somewhere back there.

Watched Equalizer 2 last night.. it was.. aggressively ok. I really liked the first one, and this had hints of that, but the story was all about government conspiracies and all that and the best part of the character is when he's helping the little people.

E2 was pretty good. Denzel is just getting the point where he's going to become less believable to be able to recover from all those fights (he's beginning to show his age). At some point soon they will need to look into passing the torch. Sad because I love me some Denzel. Dude is an amazing actor, and has been for a long time.

Well, age, and I'm not convinced he'd want to.

Jussie Smollett would be a better choice.

Liam Neeson is another one who is getting too old for his escapades.

My issue with E2 was that the whole government conspiracy nonsense wasn't needed. He is perfectly believable and entertaining dealing with the frat boys and gang bangers.. It seemed over the top to me to go so wild with ex military folk. I dunno.


Also speaking of Denzel.. I re-watched Deja Vu last night and it was really good! Holds up pretty well. I remember liking it back in the day.

Looked like a big ad to "go watch all these movies again to make sure you are ready for Endgame!" Don't get me wrong, I'm totally psyched for it, but that was more of a promo for everything leading up to it.

And Deja Vu is most definitely a forever favorite for me. Denzel at his finest.

Looks good to me.

Wait, wait, wait. Does Captain Girl Power! screw up the continuity with the Teseract?

You should really watch things before spoiling yourself on the after credits scenes.. and/or using the whole "Captain Girl Power" shtick. lol

And to answer the Q.. maybe? Unclear really.

Basically before this movie, we just knew Howard Stark had it, and then SHIELD had it, this gives a little more info on where it was/what it was doing between 1945 and 2012.

Was this planned ahead of time or whatever? Who knows. It doesn't necessarily break any existing continuity that I know of though.

Watched A Silent Voice, my first anime OVA in quite a long while. It was pretty good, affecting, even. It sounds like it excised some stuff from the early part of the manga that would have been helpful in fleshing out why the protagonist is such a fucking dick, but these things happen.

Trying hard to avoid Endgame spoilers.. got tickets for 7PM on Thursday and 6:30PM the following Tuesday at a Dolby Cinema.. 3 hours.. gonna enjoy the fuck out of it.

Watched The Nun. Not even close to as enjoyable as the other films in the Conjuring universe. Super generic and it just felt like satanic hollyweirdos taking an opportunity to desecrate Christianity and its symbols. I'm hardly religious, or at the very least not what I think I should be, but honestly, it was kind of sickening.

I have that DVR'd but never seen any of the other films.. maybe I'll just delete it.

Watched Captain America: Winter Soldier again last night.. and I don't know if I've seen it again since the theater. I REALLY liked it, but never bought it before.

Anyway it holds up really well.. You can kind of tell everything since that point was really defined by the Russo Bros, and all their movies are the core of the MCU right now.

I got half way through Civil war but had to go to bed, will finish tonight.. and the Infinity War!

So all in all I watched (in advance of Endgame):

These are all the ones I own in 4K. I also have Guardians 2 and Spider-man, but didn't feel either of those were really needed to refresh for Endgame. I do wish they'd re-released Thor and Iron Man in 4K prior to Endgame, but it is what it is.

I would have loved to had time to do the entire MCU, but didn't want to spend money on inferior versions and really didn't have the time.

Is it vital to go see Cap Marvel before Endgame? I've planned on seeing it, just haven't gotten around to it.

Yeah, I'd hoped to as well, but it isn't looking good at the moment.

I assume it's going to significantly help understand her. I guess it just depends on how big of a role you think she is going to play in Endgame.

I don't know yet.. at least the after credits thing.. I assume you both know enough about the character that she's not going to completely come out of left field.

Weren't you a fan of this show, K-Tiger?

Hell yes, I am. That trailer made me hard, though they better not kill off Judeo-slattern couple! I'm also pretty sad Powers Boothe didn't live long enough to take part.

They've been talking about this movie for so long that I chalked it up to eternal vaporware. Too bad they can't retcon history and kill Hearst.

Amazing, perfect conclusion to 10 years of the MCU. The more movies you're familiar with/bring with you into the movie, the better. 1 scene of "girl power" but Captain Marvel doesn't at all steal the show. I really liked it. 3 hours flew by.
Likes: G.I.*EDDIE

But the real question: Were you able to hold it?

Oh hell no. I think I went twice. But it wasn't a big deal. Seeing it again on Tuesday so I'll alternate pee times for full coverage!

Lol. We are going on Sunday, after lunch... so I'm assuming I'll need at least one pee break. I'm sure we'll see it again at the discount theater as well, so I'll try the same approach.

reports are saying minute 55 is the best pee break, so set your timers!
Likes: ThunderDan19

I read a pee break article this morning and it was pretty accurate I think for parts you can miss that are not super important.

You really can't go for the last hour, so make sure you go before the 3rd act starts. 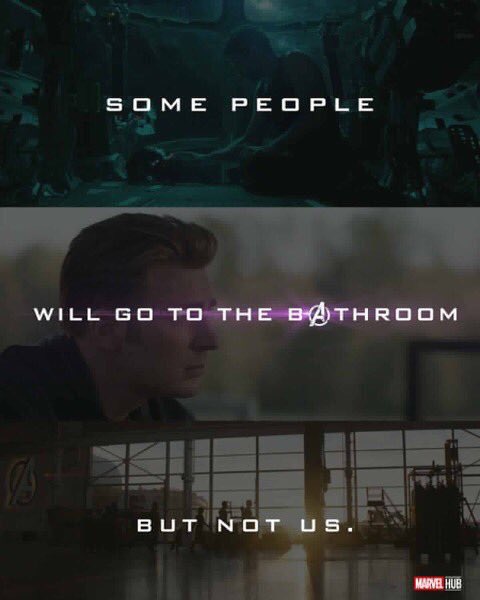 NSA said:
3 hours flew by.
Click to expand...
Another buddy of mine said the same thing. "Felt like 90 minutes"