TEETH (2007) - This was the one about the girl with the toothy vagina.. haha it was on cable and I recorded it a while ago and finally got around to seeing what it was all about. It was... okay. A bit odd, kind of a strange horror/comedy mix. An interesting watch, sadly you don't ever get a good look at 'it', but it was interesting. 6.7/10.

UNSTOPPABLE (2010) - I feel like I saw this movie before, but I couldn't remember any of the details so maybe I never did. Either way, it was an entertaining movie.. I didn't realize it was based on a true story (CSX 8888). It is VERY MUCH a Tony Scott movie with the filming style and all that. But it's paced well, is entertaining enough. 7.4/10.

BILL & TED FACE THE MUSIC (2020) - Got this in a 4K 3-pack with the first two movies for $35, so only like $12/each (compared to the launch price of $25 for the new movie alone). $12 feels like the right price. It was... okay. Some decent jokes, lots of callbacks (though IMO not enough), and some fun times. I don't think it'll end up a classic like the first one. I DID appreciate they brought back a TON of people from the first movie (including Ted's dad, and Missy!). The daughters story-line was... kind of weak if I am being honest. I was really hyped for this and ended up being a bit of a letdown. Might need to watch it again to see how I really feel. Right now, 6.9/10.

BIRDS OF PREY: something something Harley Quinn (2020) - Oof. The first 1/3rd was some of the worst movie I've seen in a long time. I was really about ready to turn it off, but I actually thought "No, I need to push through so I can review this for the 118th". Thankfully, it got better. Some kind of weird sequel to Suicide Squad (and maybe other DC movies), there is never really anything at stake here.. it just kind of happens. Harley Quinn is... sort of likable? I don't even know anymore. This DC universe is really like a cartoon/comic come to life, there is none of the realism that made the MCU so great. The comedy kind of landed, the action was decent, story.. eh? It was written and directed by women, and I guess I'd say it feels different because of that maybe. Somehow they mostly made Margo Robbie unattractive, which is a hell of a feat. If I was rating the first 1/3rd it'd be like 3.9/10. After all was said and done, I was okay entertained. 6.1/10 (which matches the IMDB rating exactly dontchaknow). Rotten tomato gives it a 78% which I feel is way too lenient.

Fun fact.. Jussie Smollet's sister is in this! 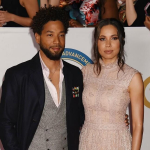