Yeah, 2016. Found it on FB marketplace from a dude who has 11 of the sets pieced out. I finally talked Sean into sending me his case fresh Starscream Skystriker which led to me finding Powerglide. Fun way to get my two most memorable Joe toys back in a way that fits my all Transformers display room. I hope the Skystriker is better quality than this Rattler turd.

Pure bliss and it’s WAY better quality. Like Target bbi plastic and stuff. WTF were they thinking with the cheap ass warped plastic on the Rattler?!?

MR picked up the Jetfire and Shockwave sets for me. What mini TFs did that Starscream set come with?

He came with pilot CC and a Megatron pistol, but Sean kept those. I can’t get over how well made this Skystriker is. The plastic is matte textured, not shiny sleek like the original. No wonder why it was my pride and joy as a 9yr old kid. I think the fake rub sign is my favorite detail.

Did you see this guy that all three OG seekers? 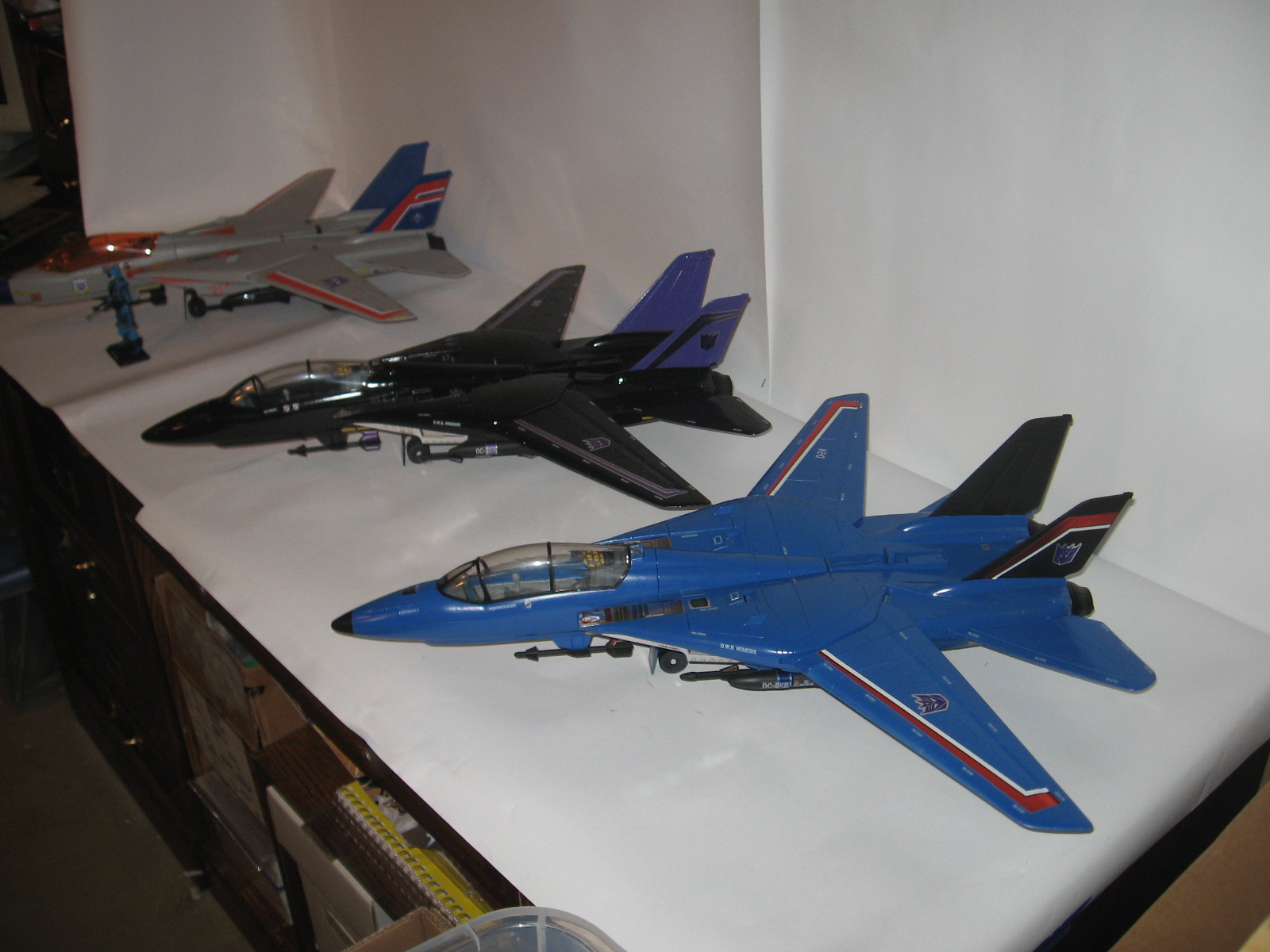 I'm nowhere near that dedicated. 1 is more than enough for novelty.

Sorry, couldn’t help myself after seeing the 3...
Reactions: G.I.*EDDIE

Sorry, couldn’t help myself after seeing the 3...
Click to expand...

It is bothersome, especially with the Aim-22’s dangling.

Hot dam! Just got an email from BBTS saying my pre-order of the HIYA Aliens APC should be arriving with them in the next two weeks.

This better not end up evaporating, I swear I'll flip out on someone.

How much was it?

It's on it's way! Scheduled to arrive on the 23rd. Part of me is still in denial that this is actually going to happen.

Holy crap, I'm checking the tracking of this thing like every hour.

Ha, I've got something on the way that has me doing that too.

Not a dream, Drop:

Mixed feelings just like the reviewer. Is it suppose to be black? Is it bare plastic without external paint? Why is it not dry brushed to give it some type of texture?

If I bought one I’d immediately paint it a dark green and dry brush it, but the fact it’s so damn expensive and then you have to buy a buttload of expensive figures to crew it just puts it out of reach. Definitely cool if you already have the figures like Bob.

It isn't supposed to be black, I'm assuming that was a cost cutting measure. Sure you could repaint it, but it has decals that are already applied, so you'd screw those up unless they are stickers or some second/third party gets around to creating some.

And this will keep being a dream until I actually hold one in my grubby paws.
Last edited: Apr 18, 2019

Now just less than a days drive (maybe 5-6 hours) from me!

Now I know how you guys feel when you find a tank or aircraft in this scale and you get really excited about it. My main worry at this point is that the custom figures I've built won't fit in the seats or might look out of scale with it.

That thing is cool, the lit monitor bank especially.

Dropshipbob said:
It isn't supposed to be black, I'm assuming that was a cost cutting measure. Sure you could repaint it, but it has decals that are already applied, so you'd screw those up unless they are stickers or some second/third party gets around to creating some.

And this will keep being a dream until I actually hold one in my grubby paws.
Click to expand...

Yeah, went back to BBTS for a peek and the pre-production pics are definitely a very dark green. It’s a shame since just a hint of color makes it look so much more real. I definitely dig it and can’t wait to here from you on what figures fit. Specifically the ROC Hawk body that I have a squad of.

It could it be like Bbi's KFOR OH-58D, and actually be (a very) dark green in person. I think they did a pretty good job on the interior, but I'm not seeing $300 worth of toy. Then again, it's a licensed 1:18 vehicle with a (likely) very small production run being released in 2019.

It mostly depends on the lighting. Some pictures make it look dark grey, others a dark green. The actual color of the screen used vehicle is called Brown Bess....which is a more brown-ish dark green. I just checked a photo I have that I saved off another boards "haul" thread and it definitely looks OD.

Tracking now says it's out for delivery with USPS. Should be on my doorstep when I get home.

The dropship is definitely OD green in the movie, so I guess I always figured the APC was the same color. It was created back in the everything is Nam days.

Yeah, Cameron was really trying mirror how we trusted our tech in Nam, and how we were over come by an enemy less advanced due to our overconfidence.

I'm glad I only work half a day. If I had to go a whole day to get home to this I'd go nuts!

Lucky. I love that anxious feeling of looking forward to a new toy- er, collectible.

I took some photos of my APC, I'll post them soon if anyone cares to see them. I know there's youtube vids and google photos aplenty.
Reactions: pcsguy88

ALIEN is released today in 4K UHD.. off to get my disk! I heard the HDR really makes the darkness pop.

Hopefully ALIENS is coming soon too. 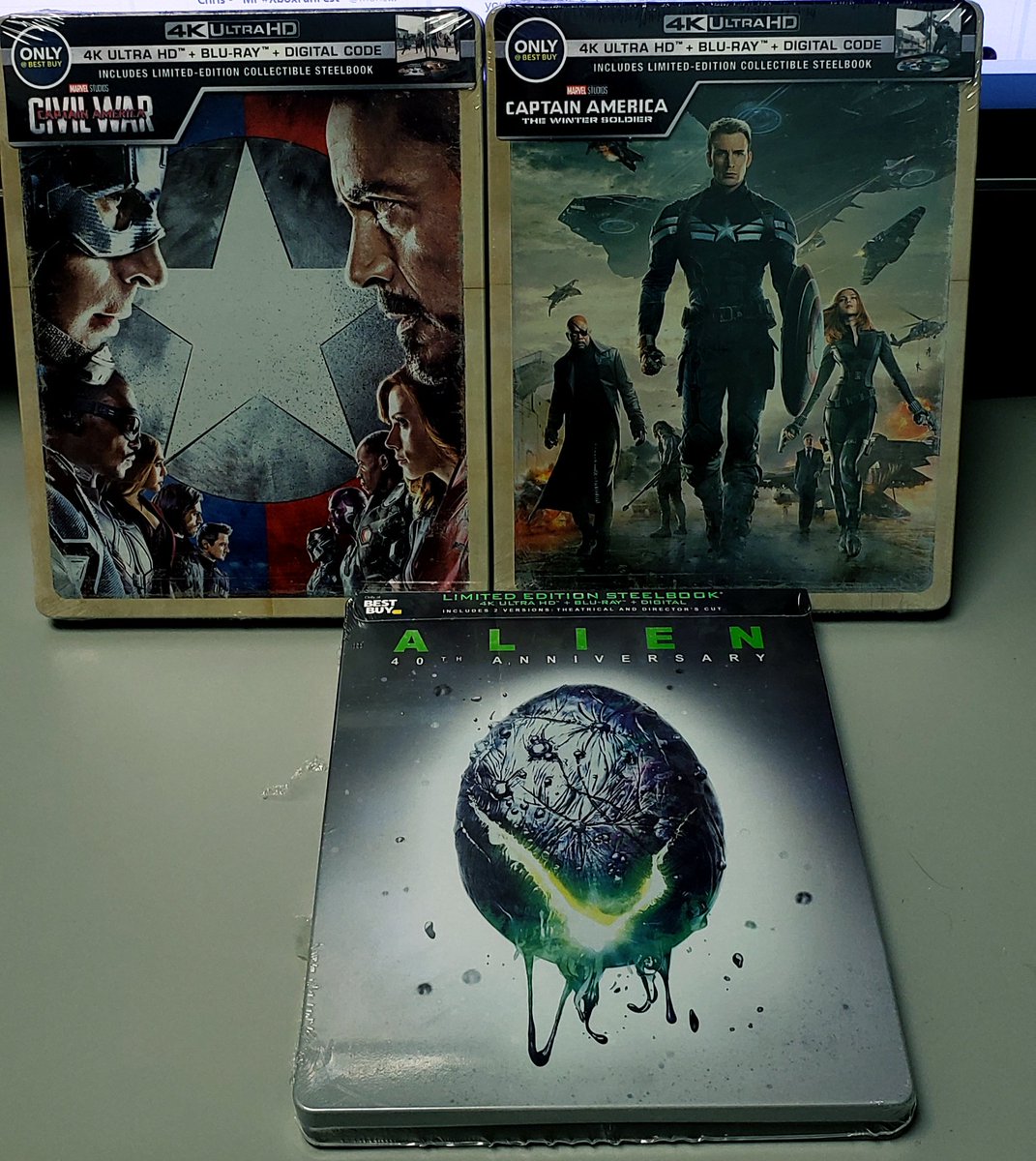 Physical media.. why do you lure me so...

Sounds like you have some very pleasant evenings and not so pleasant next mornings to come...

Pictures of my APC with some of my Colonial Marines.

That thing is much taller than it looks, so cool. Sad to see they bailed on the finish though after showing it to be green before. The windshield is where it’s most evident that they decided not to use paint, but at least your decals are straight unlike that reviewers model. If it was below $200 I think i’d Jump on it just to paint up a vehicle of my childhood dreams.

Are you happy with it, Drop?

PCS, I suppose it would be easy enough to repaint it if the markings on the front are stickers and can easily be removed. Or I suppose they could be removed regardless, repaint the thing and get someone to make new decals. Personally that doesn't bother me enough that I want to fuss with it. I too was hoping the decals on mine weren't going to be crooked. It does seem to maybe be TOO tall. I seem to recall in the movie when they get out that the roof is almost level with their heads. I do recall that the bottom of the sliding door was level with the inside flooring. The set designers didn't have to worry about the two existing in the same space because there was never a traveling shot going from the inside to the outside in one continuous take. The interior in the film would not have fit inside the actual real-world vehicle they used. HIYA on the other hand HAD to do this, so I'm sure they had to take some liberties.

K, in general yes, I am happy with it. The value is in the eye of the beholder so to speak. Not everyone thinks it's worth the $300 tag, but I love this scale, the property and I have a lot invested as-is in regards to my custom figures. There are other companies that have created big vehicles with the same amount of detail inside and out and those have often been cheaper. I think the main thing contributing to the price is that HIYA isn't a really huge company AND they probably had to pay through the nose for he ALIENS license. I wish it were cheaper, but there's no way this was going to be a $100 or $150 that I've heard some people say. I also wonder if these are a limited run. The box mine came in said 440 out of 500. That might also effect the price.

I also wonder how often I'll pop this thing open and pose figures inside. It is possible they could have nixed the interior and simply had the sliding door and it would have been just as cool and a hell of a lot cheaper....I don't know.
Last edited: Jun 28, 2019

The interior makes it, so I’d hate to see a neutered shell. Anyone thinking it should be under $200 has no reality of the 1:18 scale these days and obviously the fact this is a special Hiya project bumped it another $100. The only glaring issue is that damn unpainted frame around the windshield that looks straight out of the model kit box and that is a simple fix if it is not glued in.

I love what they did with this APC and would love to own it, but the expense puts it out of my reach since I have no home for 1:18 in my 95% Transformers room.

Yeah, that window frame is another thing that sticks out. As for the interior, yes it does make it. I was saying that if they wanted to make it cheaper they could have left that out, as I don't know if people are going to display it with the top open. It's sort of like the Millenium Falcon. It had a part you could remove to see the inside...BUT...it was also a play set aimed at kids, there were things to do inside with your figures. The APC is not much more than the old GI Joe APC, it mostly just houses figures. I don't know, it's one of those grey areas I guess. Are grown men who buy this going to pop the top off and just look at the inside? Are they going to buy enough figures to place inside to make it more interesting? Maybe that's not even an issue. I'm not even sure where I'm going with this, LOL!

Oh, one thing I forgot to mention, it did come with one of their ALIENS: USCM figures, mine was "Bella", and she came with three weapons and a display stand, so there's that.

Handmade score from the geek art fair this afternoon. The decanter is the rebel/empire symbol spliced diagonally above Choose wisely.