Our fearless leader has found a queen

NSA said:
MU HA HA HA! I SHALL OUTLAST YOU ALL AND ERADICATE THE MEMORIES YOU HOLD DEAR!

I was born in 1980, and back then stuff hung around in stores for a while I guess, as I remember most of the 1982-1983 stuff, though I think most of the toys I had were from 1984 onward. I vividly recall getting a carded Baroness for a birthday or something.

Hell, I even had EcoWarriors GI JOES!

I was too old by the time the dumb GI JOE EXXXTREME or whatever came out though.

But yeah I can see being on the 'younger' side of the 'classic' fans.

I was born during the early days of the Ford administration, and I recall buying straight-arm Joes off the pegs in '83! (I feel old just typing that...) My first Joe was Clutch (because VAMP), and then I followed with SEv1.5 and Stalker v1 (I wasn't old enough to have bothered looking for swivel-arm Stalker, as I still didn't realize the difference or that there were two versions).

I'll never forget buying Zap and having both of his shitty thumbs breaking off in the first 24 hours because he had zero prayer of holding that bazooka without bicep swivels.

Anyway, I can see it now. In a decade, NSA will be like, "Happy birthday, daughter! For your special day, I got you this case of Sherman's from Monkey Depot! It wasn't easy, but I tracked it down..." That's what I do with my son. Every birthday and x-mas, in addition to stuff he's asked for, ten-year-old SW and Indiana Jones toys appear to my son's delight, and I play like I had to scour the earth finding them... not just rummaging through my storage unit.

No worries, NSA. You can do it. I was 35 when we had our youngest. Yeah, it's tougher, but you're a pro by then, so it pretty much offsets. And since it makes your wife happy to have the baby, let her do all the challenging stuff while you see to the older one(s). :trollface:

Yeah, to be fair, we had our last one when I was 34, and it wasn't a big deal. Just talk her into breastfeeding... it's better for the kid, and it means you don't have to get up in the night. Win-win.

I just turned 41, so yeah, not happening. I can't even see the ship that sailed anymore.

I mean, I'm just being totally selfless, but I don't want her to ruin her beautiful jugs...for her sake. :trollface:

What?
Damn I woke up everytime to bring my wife the kids for the feeding ..

My cutoff was 40. No way in hell am I going to be the 60yr old at graduation.
Reactions: NSA

Yeah absolutely. I'm donezki now (hopefully). Being 55 at graduation is bad enough. Crazy that one kid is going to graduate when I turn 40 and the other won't until I'm 55! There goes my plan to enjoy my 40s!

The queen made a princess! Congrats NSA!

Nice, very nice. Where do we find a Baroness onesie to send them?! 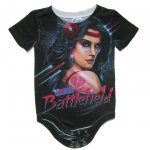 Good lord that's awful. How much?

Haha thank you! It was a lot of hard work on my part

Back at work this week, and off again next week.. baby and mom are doing well, she's sleeping a little bit, so life isn't totally terrible. It's still impacting my gaming time though :'(

A baby at 37.. what is wrong with me! Certainly different than having a baby at 22. Though I think the experience factor helps offset the aching bones somewhat..

I wonder if statistically older more mature parents raise better children...? Even if they had previously never had children/zero experience.

Congratulations on the new workload BTW.

I don't know, I think the wisdom you gain with age also lets you cut a lot of corners to save time for other fun stuff..

I imagine it probably is more based on the type of person, a good person will probably be a good parent at any age and a bad person will likely suck at it forever.

Probably. I just feel like the older we get, the more emotionally developed we get. Of course, like you said, that depends on what kind of person you are to begin with. I certainly know I'm much more rationally mature now than I was at 23.

Yeah, I think so too. But then you also probably are more prone to becoming a helicopter parent if you're old and wise and afraid of everything.. whereas a younger person might still be adventurous/etc. That is counteracted somewhat for me since I had kids younger, so I more or less know what will and won't kill them.. so I don't stress the little things as much. But if you were an older first time parent, I could see how it could be more stressful.

I had my first at 32. While I don't think I ever stressed out, I assume I was appropriately cautious. The second one definitely gets a longer leash though. I think that part is true for parents of any age.

I don't think I'd want to have kids past 35 though. Now in my 40's, I'm starting to understand why older people don't like to get in the floor. After 15 minutes, everything hurts.

My wife is 5 years younger though, and we didn't get married until she was like 31, so she still has the idea that she wants another one.. I said sure, when we get a bigger house and I don't get any older

There are 2 types of people

At times the 2 do not go together

I'm at 16 and counting. I've found that as long as I'm getting some twice a week, any and all martial issues seem trivial. In rare times of stress that cause frequency to dip, that's when shit gets magnified. My wife knows it too. We can be arguing, and she'll look and me and say, "clearly we need to get laid."

Lord no, it doesn't work when I try it! But when she acknowledges the root of the problem, she's usually correct.

Goodness gracious me! Congrats (early, presuming you don't get killed by River Pirates by then)!