Not getting my hopes up too much, but I know Epstein was supposed to have a lot of dirt on a lot of prominent people. He'd be an obvious first domino.
Reactions: G.I.*EDDIE


Again, I have no faith any of this connects to anything. The powers that be won't allow it. Since it's getting enough attention, they may sacrifice a few people to quell the public appetite.. but we're not getting big people.
Reactions: G.I.*EDDIE 
Again, I have no faith any of this connects to anything. The powers that be won't allow it. Since it's getting enough attention, they may sacrifice a few people to quell the public appetite.. but we're not getting big people.
Click to expand...

I only see the little birdie (in the original message)... Weird, I see it in the quote though...

Basically just that they found tons of pictures of apparently underaged girls.. and CDs with [Name] + [Name] which I wonder is blackmail stuff? 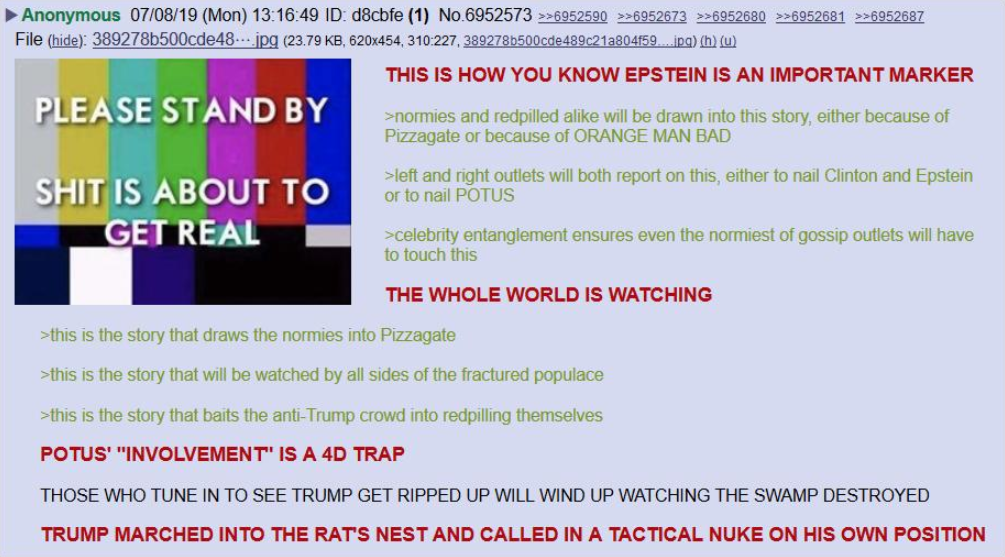 Whose to say it wasn't all DEEPFAKED?! Never believe your own eyes!

Hypothetically, say Trump is implicated in this.. somehow legitimately. What would you think? Take him down too? Too big to fail?

If he committed the crime, he must do the time (as with all people). But I seriously doubt it. My gut feeling is that, when he discovered it, he immediately got out, but put that knowledge away until he could eventually pull it out and use it to clean house. If the left had anything on him, it would have been outed long ago.
Reactions: G.I.*EDDIE

ThunderDan19 said:
If the left had anything on him, it would have been outed long ago.
Click to expand...

That so much. That card would've been played pre-November 2016.

I suppose, but I kind of feel like all the high high level people are on their own playing field, and all of this partisan squabbling on either side is just.. inconsequential to them. They have billions (BILLIONS!) of dollars and nothing any of us say or do makes a piss of difference to them.

I imagine the left leaning papers and networks are making money hand over fist with this anti-Trump stuff.. just like the right leaning places were loving the Obama era and the Tea Party/etc. Do you think their political preference is more important than money? Nahhhh. I think a lot of them would be perfectly happy with another Trump term.. it just means more viewers and more drama and more money. I also think most people who are this high up have stakes on both sides and really, whatever happens, they win.

F-U money is only good if you are free to use it. I wouldn't be surprised to see a significant exodus by anyone who has the money and thinks they might be implicated to non-extradition countries. You can bet most of their money is in places that the DOJ can't touch already. They'd likely forfeit their US based assets to retain some semblance of freedom.

Those people, big and small, are FAR more connected than we can possibly imagine. Untouchably rich, celebs, politicians, media people, etc. They all have one unifying goal. The anons have actually tracked how connected they all are. It's insane. They all need back scratchers.

Interesting.. also Trumps labor secretary.. Acosta.. was the one who helped let Epstein off so lightly in 2008.

Still doesn't tie Trump directly to anything, but still isn't a good look.

Posting before I've read it:

Haven't clicked it but "the true origins"...Spidy senses tingling like I'm having a seizure.

Anyway, Q's been posting a bit about Epstein. Starting at 3353. I like this one from today.

You didn't think the Epstein investigation began a few months ago did you?
It was all under the direction and oversight of AG Jeff Sessions.
Expect a lot more to become public (unsealing).
Q

NeonRevolt take on this journalist/article.

@Isikoff is a dastardly liar.

This is the guy who got his marching orders from DNC lawyer Alexandra Chalupa, who got the #BlackLedger from Sergei Leshenko, courtesy of George Soros and the Podesta Group.

Absolute bottom-feeding scum. We would have WASTED two years on the #RussianCollusionDelusion without Isikoff's lying for the Cabal.

And of all things, to write this about Seth Rich's murder! They must be really panicked that the truth is about to come out.

And Deborah Sines - former assistant U.S. attorney in charge of the Rich case - remember the name.

I can almost guarantee this is someone Jessie K. Liu had her take an early "retirement."

>In fact, the Fox story was a “complete fabrication,” said Sines, who consulted with the FBI about the Fox News claims. There was “no connection between Seth and WikiLeaks. And there was no evidence on his work computer of him downloading and disseminating things from the DNC.”

Good. Force them to put their chips on the table in front of the public eye.

Then roll out the Wikileaks server and emails to expose these journalistic frauds once and for all.

But here's the kicker at the end of the article, and it's showing you the Cabal's hand:

They want a "snitch" that "witnessed" Rich's murder to come forward:

>Sines chalks up the lack of progress to what she calls the anti-snitch culture of the streets in Washington, D.C.

>“In Washington, D.C., being a witness to a murder can mean a death sentence,” the former prosecutor said. “I’ve lost witnesses that were murdered because they were witnesses."

>Nevertheless... Sines says she is hopeful that the case will ultimately be cracked.

Treasonous scum, the lot of them.
Click to expand...

Totally two sets of laws in this country (and world, really), 1 for rich people and 1 for everyone else.

You're not wrong about the cronyism and class favoritism, but in this case, it seems like, initially at least, it was a residency problem. I mean, does the NYPD chase him to the Virgin Islands if he doesn't show up on his own accord? And I have a significant problem with any NYC city councilperson chiding the police about corruption/favoritism. I mean, c'mon.

Is the Virgin Island law enforcement (or any other in the world) even allowed on his private island?

I would think their LE would have jurisdiction if they are within their sovereign territory, but I highly doubt they have the means or motivation to enforce anything off the main touristy islands.

Edit: I took a quick look at the satellite images of his island. No airfield so they could always pick him up on a main island when he went to use his plane I suppose, assuming they monitored the plane and flight plans.
Last edited: Jul 11, 2019

ThunderDan19 said:
You're not wrong about the cronyism and class favoritism, but in this case, it seems like, initially at least, it was a residency problem. I mean, does the NYPD chase him to the Virgin Islands if he doesn't show up on his own accord? And I have a significant problem with any NYC city councilperson chiding the police about corruption/favoritism. I mean, c'mon.
Click to expand...

In the article it said that was their original argument, and that was thrown out by a judge in 2011 or something.. but they continued to say "not our problem".

I kind of get it though. What parole officer really has the resources to try to keep up with an international jetsetting billionaire? Had his punishment actually fit the crime it would not have been an issue as he'd be taking punishment nightly at some federal penitentiary instead of walking free.

But the onus was on HIM to report in every 90 days. Easy to just say well, you missed the *checks notes* last 8 years of check ins so guess what, you're going to jail.

Isn't that kind of what they did, but with additional ammo to actually prosecute him fully this go 'round?

Well, yes, but it wasn't the NYPD which was supposed to be keeping tabs on him all this time, it was the SDNY.. Federal stuff.

Basically the local police were another group who turned a blind eye to his behavior.. how and why remains to be seen, but I wouldn't put it past them to have $$$$ involved.
Reactions: dannyc and G.I.*EDDIE

It's more than that.
Reactions: ThunderDan19 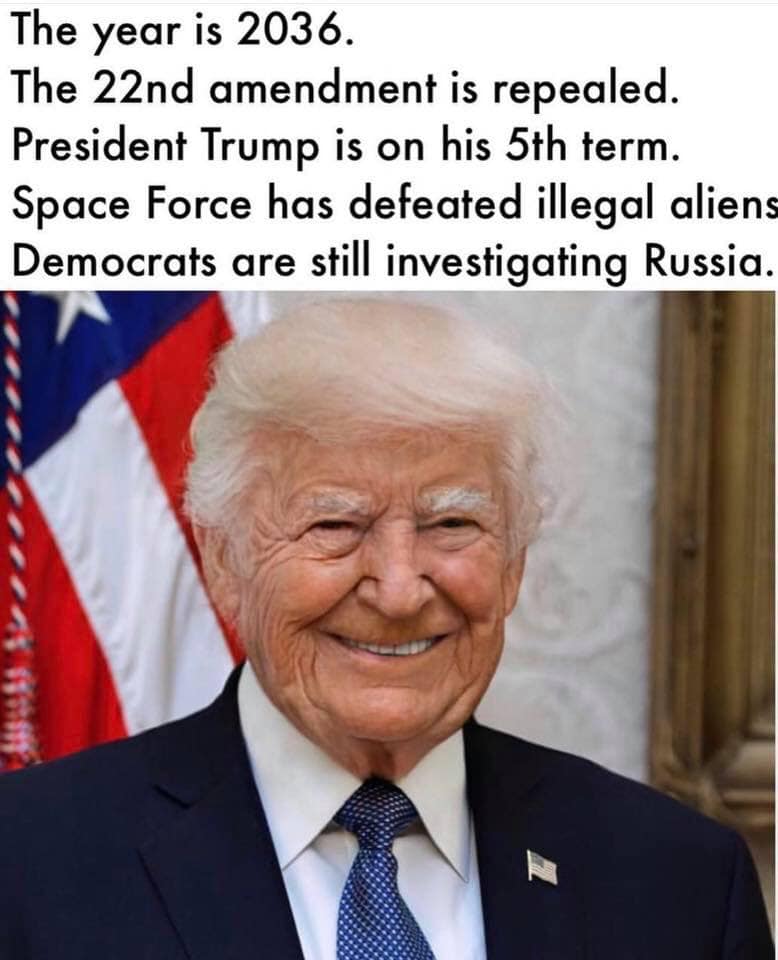 Now I know how the rest of the world looks at Trump from a distance.

Probably unwise to attack the President and Israel.

“I have no interest in allowing the conversation about my personal life to continue and so I have no desire to discuss it.”
Click to expand...

“It looks like on the surface that she used campaign finance funds to benefit her paramour,” said Tom Fitton, head of conservative oversight group Judicial Watch, which last month asked the House Office of Congressional Ethics to investigate unsubstantiated claims that Omar (D – Minn.) married her brother to get him a green card."

I love how Dems have no problem attacking the President's kids, but ask one of them about marrying their brother and having an affair with a staffer paid with campaign funds, and they suddenly "have no desire to discuss it".

I'm hesitant to get too excited about any of that nonsense, most of it is coming from Right-leaning sources and so far nothing has really panned out to much of anything.

Agreed, just some embarrassing headlines for her, but that’s what you get for attacking the government when you are part of it.

But that's largely what they do to Trump without blinking. F#$%, that's what started the whole "russia collusion" bit, a made-up story by paid democrat allies. And it consumed most of the oxygen in washington for three damn years.

I have zero sympathy for this woman, who goes out of her way to make a headline and to publically scream racist/nazi at anyone who disagrees with her. It has nothing to do with what she looks like or where she's from. A shady opportunist is a shady opportunist.

I don't have sympathy, and I am sure it's exactly that happens on the left, but when has emulating them ever been a good idea?

I just say don't read into it too much, as it's all theater nonsense for the most part. If we didn't get shit done out of arresting Epstein.. ain't nothing ever going to actually change.

I don't disagree there. But I also take issue with her dismissive attitude. It doesn't nothing to make her look less shady.

But I completely agree that nothing will happen. It's not like she was photographed touching a flak jacket... they'll make you resign over that shit.

This is not real life anymore. I'm convinced.

TDS knows no bounds. It doesn’t matter how often he calls out their hypocrisy. They are driven by hate and rationality gets tossed to the side at every attempt to soil the POTUS.
You must log in or register to reply here.
Share:
Facebook Twitter Reddit Email Link
Top Bottom