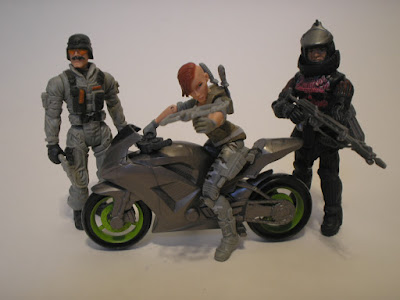 The CORPS! Elite 3-Pack is definitely a game of three halves (yes, I know...)

Ogre is a solid, retro-style figure that CORPS! collectors will not only recognize but will welcome into their ranks. He's a great, solid, durable figure that will survive all the down-the-staircase tumbles and backyard exploration sessions you can throw at him. He also looks pretty damned cool and is a great villain for your CORPS! troopers to fight.

Buckshot is certainly the weakest entry in the line-up. I've mentioned before that I don't have a problem with limited-articulation figures if they can be posed in a dynamic fashion. Chap Mei got this right with their True Legends figures. Sadly, Lanard didn't here. All I can really say is that if you have a spare pilot's seat in a vehicle that will accommodate him, then Buckshot will probably find some role in your collection.

And OK, I know: nobody is buying this pack for Ogre or Buckshot. Snake Bite is the real attraction here, so the question is, does she justify buying the entire pack, just for a single figure? The answer is a resounding ''yes.''

Consider this: the three-figure packs from Lanard retail at about $6 with tax. For that you get a solid figure in the form of Ogre, a throw-away bundled pilot (Buckshot) and the super kick-ass Snake Bite. Oh and a bunch of accessories and a really neat motorcycle. Now let's throw it over to Hasbro and see what they can do at that price... a 5 PoA Avengers figure or maybe a couple of 2'' Guardians of the Galaxy figures?

I know where I'd rather spend my money.

No, they're not perfect. Ogre's limited hip movement may be a deal breaker for some, Buckshot is just there to make up the numbers and Snake Bite's sculpt may be a little stylized (she has classic comicbook too-much-leg-to-torso dynamic female proportions) but these are really very minor points and are included only to provide a degree of balance in what would otherwise be my entry in 2015's Let's Kiss Lanard's Butt Contest.

The real kicker for me, though, is that Lanard has managed to capture an element of retro fun long missing from most toy lines without descending into the realms of the kitsch or silly.

But it doesn't end there. Alongside the new 4'' re-brand, Lanard has also launched a range of very stylized, Sigma-6 influenced 6'' figures dubbed ''Super Soldiers'' and re-introduced a line of 12'' figures. And did I also mention there are two Exo-Battlesuit mechs and at least two new, giant-size vehicles with light and sound play features to accompany the new CORPS! Elite wave? It's certainly an exciting time if you're a fan of their figures, for sure...

Here's the thing: the CORPS! will never be GI Joe. But in this case, that's a good thing, because what we have here is a throwback to the days when GI Joe was an affordable, durable and fun line of quasi-comicbook heroes battling supervillains bent on world domination. And sure, I love my life-like, complex Joes as much as the next collector. But I love them for their technical intricacy as collectible pieces. I love the CORPS! figures more for their sheer fun factor. Handling them is like stepping back to the 80s and remembering when toys were fun and meant to be played with. It's like somebody at Lanard realized that instead of competing with GI Joe on a technical level they should instead concentrate on what makes this line - and what made GI Joe - so much fun back in the day. If, like me, you're a fan of retro goodness then you'll totally get where I'm coming from with that, as Lanard has actually managed to out-GI Joe Hasbro in this instance. If you rate the Real American Hero Joes over the Retaliation line then you're sure to dig what Lanard has here.

I could spend the rest of the day talking about how good this set is. From the exceptional value-for-money the pack represents, to the great packaging (and when was the last time you saw a Review here that mentioned packaging?) and the quality of the figures within but ultimately there's nothing I can say to really convey just how much muddy-funstering FUN this set is.

Aaaaaaand now I own this.

Yeah. Like I said in the review, I love how she's got a real character to her. She looks so kick-ass! Plus she can actually sit on the motorbike, which is a definite plus!

Her head is a bit larger in comparison. I'm wondering if Contraband could shrink cast it some.

darthdre758 said:
Her head is a bit larger in comparison. I'm wondering if Contraband could shrink cast it some.
Click to expand...

He intends to try.

I wonder if it would work better on a larger body. Bet it works on The Walking Dead or Halo figures.

Probably on both for sure.

Yeah, her proportions are definitely off. But I like that kind of comicbook-y look. It does look weird on a Joebod though...