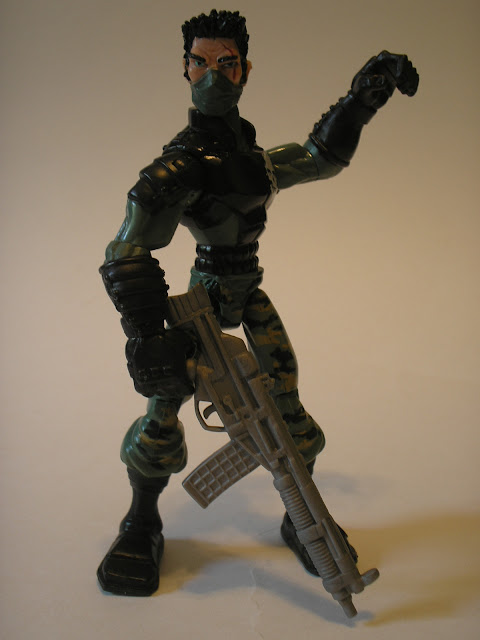 I've always appreciated Lanard's The CORPS! figures. I love that despite being cheap they don't feel it and that there's always an element of fun to them and their most recent releases have done nothing but enforce my appreciation in a much more positive way. Right now I'm probably more excited about The CORPS! toys - across all scales - than I have been about Hasbro's offerings, particularly GI Joe, for a long time.

Of the six figures available, I have to say that Masked Guy is probably the best-looking of the lot in my opinion. The combination of lean, angular sculpting with cool armor design and the masked look gives him a really great style. The fact that most of this figure came from a completely different martial arts-themed character is also a pretty impressive achievement. One of my design mentors once said to me that one of the most difficult forms of creativity was to take what you have and make something completely new from it. If that is the case then Lanard has some geniuses working for them...

OK, so his rifle is a pretty weak accessory and it would have been great to have a better weapon. Even just adding a peg to slot the piece into his back would have been a massive improvement. But this is really a very minor point and I'm sure it won't even enter the minds of the target audience that the gun is simply too big to be used in one hand.

Where this figure really wins out though - great sculpt aside - is in the articulation rigging. Yes, his twist elbows are annoying but I'd rather have them than not. And there are some production problems with my Masked Guy's joints starting off a little loose and becoming looser over time. But it's not so bad as to make him completely un-pose-able: it's just something I have to take into account when standing him on my shelf. Where, by the way, he looks awesome.

And as I'm sure regular readers know, we love a good bargain at That Figures so the fact that the Super Soldiers figures retail for under $4.50 is just the sweet, sweet icing on a cake of awesome.

If you're a fan of 6'' figures and you're looking to bolster your collection with a few unique looking figures or you just dig the Sigma 6/Marvel Mashers look them you should certainly be looking at this line, as you'll certainly find Masked Guy a great addition to your collection.