FULL REVIEW AND PICS:
That Figures: REVIEW: The CORPS! Curse Exo-Battlesuit with Troll 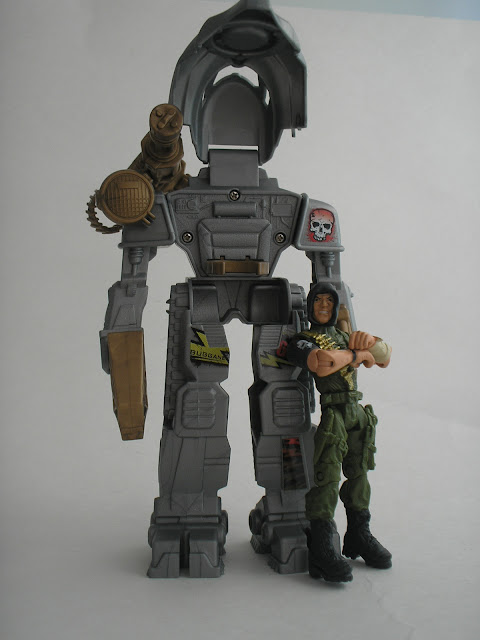 Lanard's The CORPS! figures are always a lot of fun. I like their retro-styling and great value for money, so it will, I'm sure, come as no surprise to learn that I'm a fan of this Exo-Battlesuit set.

Troll is a standard CORPS! figure. Your views on whether he's a good toy or not depend on your views of Lanard's figures as a whole. Personally I really like their solid, robust feel, cartoon-ish sculpts and strong character aesthetic but I can see that fans of more detailed, super-articulated or ''real-world'' military figures won't feel the same.

And the Exo-Battlesuit will definitely be a design that divides collectors. I'm really not sure if ''serious'' military toy fans are into The CORPS! line-up but if they are I can see that this won't be a toy they'll have on their list. But if you're a fan of sci-fi, fantasy or even superhero-themed toys then you'll find there's a lot to like here.

Sure, the sculpt may look a little clunky and the articulation is fairly limited. And yes, some canopy glass and some paint to highlight the details would have been nice. I could even see an argument that the lack of a spring-loaded missile weapon is to the toy's detriment but these are really very minor points, especially when you consider what you do get - and how much you're paying for it.

At around $8 and change, the set represents great value for money. Troll is a cool-looking figure, for sure, but as I mentioned above, the real draw here is the Exo-Battlesuit. The question is, is it good enough to justify the asking price? The answer is a most definite ''yes.''

Another super-affordable, super-fun addition to the line-up.