Anyone heard anything good about this one? Everything I've seen says "five-alarm dumpster fire". I've got the feeling that in five months time we'll be discussing the worst SW film since The Phantom Menace. If there was a story that didn't need telling more than Wolverine's origins, it's Han-fucking-Solo's. First trailer when?

I'd guess figures will be hitting in March, so we can look for those at Toy Fair. Maybe some cool figures in the Black series? Nah, we're talking about Hasbro, here. :trollface:

Is this still scheduled for May? Or did they bump it to December like all the rest?

I'm a little surprised they don't use one SW movie as the marketing start point for the next. A la 1st trailer is shown at TLJ screenings etc. Or at the end as an after credits thing, that would be interesting.

Ok I looked and it's still set for May. So no Star Wars next Christmas? Interesting.

If they keep the Rogue One-esque old Star Wars look.. which they fucking should since it's in the past.. I'll be happy.

I assume the movie will be as follows:

Little Han wants to be a Clonetrooper, but alas, "he's no clone!"
Clones start dying off or whatever clones do, so the Empire starts recruiting actual people. First time we'll actually see OT Storm Troopers being real people?
Han goes to the academy to be a pilot or something. Some things rub him the wrong way. Maybe this Empire thing isn't all it's cracked up to be?
His squad or whatever will be assigned to eliminate some ship, turns out its full of Wookies and he saves Chewie (hello life debt).
Now on the run, he somehow ends up stealing/winning the Falcon from Lando and they have to pull off some big set piece to secure his freedom/get away/do something something.

Really, all they need to do to sell me on this is position it as an "Anti-TLJ" full of old timey OT nostalgia. Show some good, classic fucking Imperial Star Destroyers, a Corellian Corvette.. etc.

I think they will dump the storm trooper origin.

May must be when the previous movieâ€™s toy sales slump and they want that steady stream all year.

Once they cast Alden Ehrenreic over the superior Anthony Ingruber simply due to Hollywood âœ¡ nepotism (go ahead, check out Alden's imdb), I checked out of this one.

Seriously, check this guy (Anthony) out. He IS Harrison Ford.

G.I.*EDDIE said:
Once they cast Alden Ehrenreic over the superior Anthony Ingruber simply due to Hollywood âœ¡ nepotism (go ahead, check out Alden's imdb), I checked out of this one.

Seriously, check this guy (Anthony) out. He IS Harrison Ford.

https://www.youtube.com/watch?v=bba_wPdLxp4
Click to expand...
He should do the Han and Greedo exchange. He DOES do a pretty mean Ford.

His little impression videos are good too.

I wonder if the old directing people had a boner for that one guy. Apparently they needed to get him an acting coach during production because he wasn't doing well.

NSA said:
I wonder if the old directing people had a boner for that one guy. Apparently they needed to get him an acting coach during production because he wasn't doing well.
Click to expand...
Yes, they did. From Imdb

"Discovered" by Steven Spielberg at the Bat Mitzvah of a friend of Spielberg's daughter.

He is of Ashkenazi Jewish heritage (his ancestors came from Russia, Austria, Hungary, and Poland). Alden had a Bar Mitzvah ceremony.
Click to expand...

I mean, it's LA/Hollywood.. everyone here is Jewish, it's not really that shocking

Ehrenreich was discovered at a friend's Bat Mitzvah reception by Steven Spielberg, when Spielberg watched a comedy video created by Ehrenreich and a friend, "which began in the present and eventually cut to 20 or 30 years later, with Mr. Ehrenreich, in a kimono, screaming to stop a wedding." Ehrenreich has described the comedic performance he gave in the movie as, "I ran around as a skinny little punk, trying on girls' clothes and eating dirt." He was then contacted by DreamWorks, a studio which Spielberg helped found, and met with its casting director. Steven Spielberg said: "He (Alden Ehrenreich) was in a bat mitzvah video that my daughter acted with him in for their best friend. They showed me the video and I loved it and I got him an agent. That's sort of how it all began."
Click to expand...
It sounds pretty normal to me, all things considered. His Wiki page reads that he was probably well off to begin with (Accountant Dad, Interior Decorator mom (aka she needs something to do with her time)), went to a good school.. friends with Spielbergs daughter? Sounds like a cakewalk if he could actually act too.

Would be interesting to see the screen tests he did, since they're saying that is where he won the part.

I do wonder if they didn't want a doppelganger for Han when they didn't have one for Lando, and whoever else shows up. 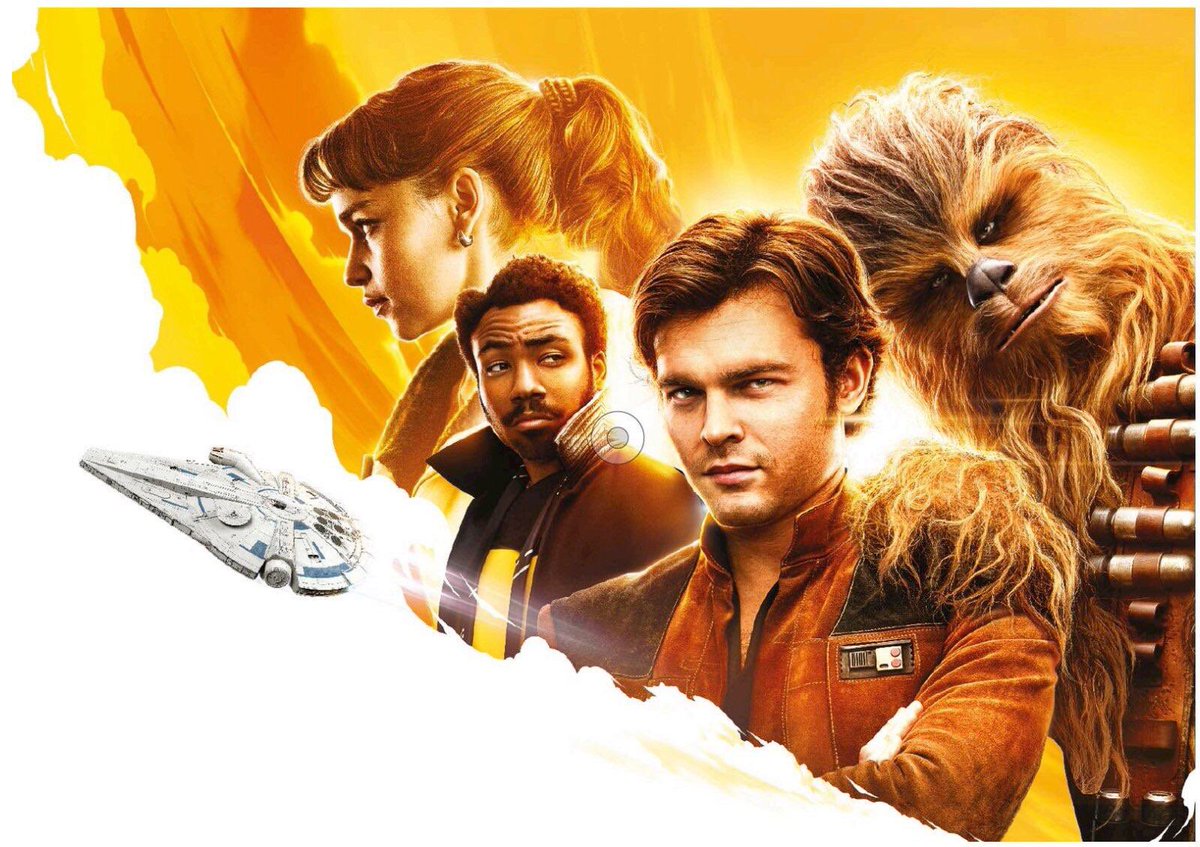 Ummm, I guess a bright spot is that we'll get a 3.75 scale Emilia Clarke head sculpt?

The lead actor, Alden Ehrenreich, canâ€™t act, and they had a dialogue coach on hand for all of his scenes.
Click to expand...
But hey, at least he was/is similar to the big wigs in Hollywood.

...a small but vocal group of audiences expressed their displeasure at the deviation from their expectations so strongly that the film's audience score on Rotten Tomatoes has dropped to the lowest in the entire franchise
Click to expand...
Small? Small?? You mean so small that it's having little impact on ratings and earnings? Oh, wait. The opposite is happening. :lmao:

Star Wars: Source Claims Disney Preparing For 'Solo' to "Bomb"
Click to expand...
That sucks so bad. After TLJ I had my hopes on this film. How can they mess this up? We already know a good part of his backstory. He is a scoundrel and he shoots first.

Lord Bodega said:
He is a scoundrel and he shoots second.
Click to expand...
Fixed that for you.

Clearly you haven't seen the proper version of the movies.

Maybe freedom of speech shouldn't be a thing.

It's a Star wars movie made for Millennial non-Star wars fans, Just like The Last Jedi.

When I drove away from the theater after seeing TLJ, I thought two things:

1. I'm glad my wife and stepson were not in town at the time. If I had taken them, it would have been a larger waste of money.

2. This is the last Star wars film that I'm ever going to pay to see.

Wish that was a joke

pcsguy88 said:
Maybe freedom of speech shouldn't be a thing.

https://mashable.com/2018/04/09/han-solo-lando-calrissian-in-love-star-wars-trailer/?utm_cid=hp-r-10#jrF5g5G5FPqx
Click to expand...
Do I even want to know how you found that? Ugh. Then again you can find almost anything on the internet..

The new trailers make this look way better than I thought it would be. I am actually kind of excited for it now. It looks like it should be more in-line with Rogue One than The Last Jedi. It's almost like they made Han Solo the side character in his own movie, which kind of works, at least in the trailers.

I wonder if the new 'numbered' movies are for the new fans, and the "Star Wars story" movies are going to be for the older fans?

It passes the eye and the humor test so far, but we will see if they leave the politics out of this one. Help us Han and Chewie, you’re our only hope.

Will be interesting to see how the trailers compare to the actual final movie.. coming up in a month..

The Kasdans were in charge of this right? He did well with Empire Strikes Back...

I actually really like the riffs on the SW theme they're using for this. Not sure if its just trailer music of indicative of the final product. I'm assuming Williams is only doing the 'main' movies at this point.

Some clips.. I don't think it looks so bad..

Saw another preview last night at Avengers IW. I'll be checking it out... with pretty low expectations.

Yeah most of the first impressions are uniformly good.. I mean, these people got to go to a fancy premier so most won't bad mouth it.. but it is promising..

These people said BvS & justice league were good too.

I'll wait until non contractually limited to what they can say people actually see it.
Likes: G.I.*EDDIE

So.. maybe low means I'll like it even more than Rogue One?

I rarely trust any reviews anymore, so I'll just plan to go into it optimistic and see how it turns out. I went into TLJ the same way, and walked out disappointed, but I didn't go in with any negative bias.

Are those RO and LJ initial ratings? Or is it moot because they didn't change much over time?

But yeah, lower might be a better indicator. Though I may not ever be able to overcome my bitterness towards the Han casting. I still can't get past the new MoS costume. YUCK!

Well, besides the favoritism angle, I'd have to assume the other guy had a better screen test maybe. I dunno. He doesn't have a ton on his resume either.

I don't know what TLJ tomato outlook was before the movie premiered though.

NSA said:
Well, besides the favoritism angle, I'd have to assume the other guy had a better screen test maybe. I dunno. He doesn't have a ton on his resume either.
Click to expand...
I remember these reports a little while back.

Due to the timing of that I kind of wonder if the fired Directors were just not very good at getting the right performances out of the actors.

Everything seemed to get shipshape once Ron Howard got involved. I liked the Lego Movie and 21 Jumpstreet.. but those are not STAR WARS movies.. so maybe they were in over their head? Will be interesting to see if their cut of the movie is ever explained.

Got my tickets for tonight!

What a turn around for me personally.. maybe Star Wars has its hooks in me more than I thought. I had almost written it off completely after walking out of the Last Jedi.. but Rebels.. + watching Rogue One again + really fun trailers for [SOLO] have made me pretty excited to see it.

So this happens. Seriously, you've been warned. 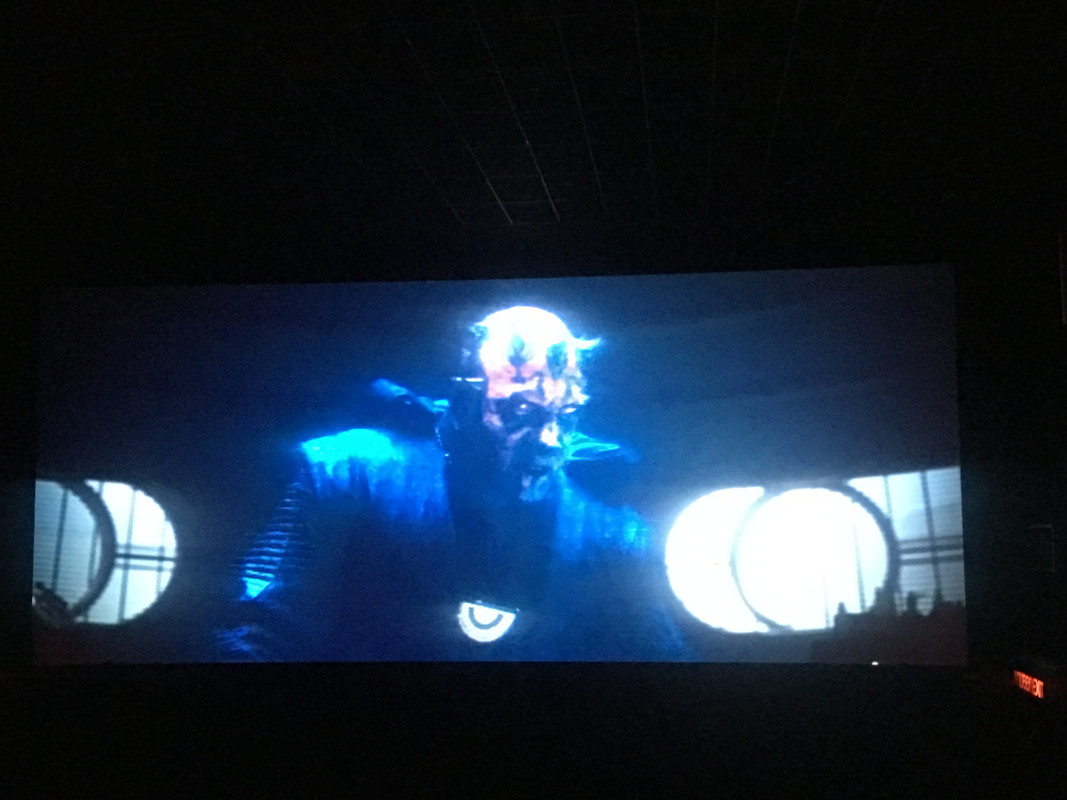 Really want to read that but I'm going to hold back so I can let my true feelings come out after the movie. Very tempted though.. But I must resist!

Wait, is that
his ghost? Difficult to tell. Solo can't possibly take place before his death. Unless Han is a baby or youngster during the time of that scene.

Amazing movie. Right there with Rogue One. Go see it. No last jedi hangover what so ever.

That spoiler was fantastic. So amazing to see it unspoiled.

Just as an epilogue before bed.. Solo was great. My friend and I talked about it all night. We both walked out of TLJ disappointed and Solo restored our hope.. It was very much through and through a star wars movie.

Nothing groundbreaking but nothing ridiculous. It'll be better for fans than nonfans.