Seriously though, I hope there is a mass "I will no longer be attending and demand a refund" situation.

PROVOST said:
https://heatst.com/culture-wars/pri...stormtrooper-costumes-because-of-nazi-tie-in/
Click to expand...
Classic case of a school that should learn what history actual is & not what it thinks it is.


EDIT: Are they banning volkswagens now because of their Nazi connections?

Man, what does it say about our society that some of the most closed-minded, anti-freedom of speech (freedom of anything) and frankly stupid people are employed by and even running a lot of the big name higher education institutions (aka indoctrination centers)? I mean, seriously, these morons couldn't run a 7-Eleven and they are somehow in charge of a university.

And while, yes, Nazi Stormtroopers were a thing.. I am pretty sure Star Wars Stormtroopers have surpassed them in every recognizable metric by this point.

It's allllllll part of the plan. A Vegan woman in Georgia was arrested for taking out her anger on the world of meat by slamming her car into a truck carrying chicken.

The woman was identified as 26-year-old Judith Moriah Armstrong.

Police were able to track her down, but she refused to leave her house
until they produced a warrant.

She did, however, speak to them through different windows in the house

After originally telling police it was an accident, she admitted to hitting the truck on purpose. She claimed she did it because she was a vegan.

The driver of the truck says she hit the truck once from the side and then rammed it again after he slammed the breaks, causing his truck to spin out.

The driver called 911 to report the color of the car, but Armstrong had already fled the scene. Armstrong claimed to be sober when the incident occurred but admitted to taking â€œa couple of shotsâ€￾ when she got home.

Police tested her blood-alcohol level at the jail and she blew a .089, which is higher than the legal limit.

Is that supposed to be a brain teaser...or, something?

Not that I am aware of.

Just a SJW raging by the look of it.

That's hilarious... but just wait for some feminazis to come along and claim that the dress silhouette is sexist or forcing antiquated gender norms or some shit, and then they end up with the old crossing symbols, but they're called "women in pantsuits".

There's no winning. You could add tits and they'd be upset.

G.I.*EDDIE said:
There's no winning. You could add tits and they'd be upset.
Click to expand...
That's insensitive to women with small breasts.

Hilarious their struggle for an identity. Girls that have been convinced to be ashamed to be a girl. I like to think that that nonsense plagues a very small minority of women and MSM makes it look like a much bigger deal than it actually is.

I thought the existing figure was about as non-descript as you could possibly get for representing a human adult. It really said nothing about race, gender (not really), religion, orientation. It's specifically designed so that you don't have to read to understand it, so even morons shouldn't be offended.

Any time I see people get upset over crap like that, my first thought is always, "This person clearly has too much free time. People with jobs, families, and other adult responsibilities do not have any fucks to give about such bullshit." It's the same thought I have when I see people protesting in the streets, historically in the middle east but now even domestically. Who has so little going on in their life that THIS is a priority?!?!

This is what happens when our country pays people to do nothing...

It's not "nothing" its deep retrospectives into peoples feelings!

Yeah I don't know, hopefully at some point we'll just laugh at this phase. But 'those people' seem hell bent on making it part of the fabric of our society.

nacho said:
It really said nothing about race...
Click to expand...
Uhhhh, it's clearly a black person.

ThunderDan19 said:
This is what happens when our country pays people to do nothing...
Click to expand...
And then pays them/tells them to be upset about nothing.

I suppose we survived, though not unscathed, the 60's. Maybe President The Donald can take us into the next 80's. Job numbers were off the charts this past month and the market is well up since the election. Looks like businesses are finally considering looking forward after 8 years of holding pattern. Maybe some of these people will start getting a clue that they best get to work as the gubment teat might be in jeopardy of drying up in the not too distant future.

Imagine the outrage from the left should the economy start really taking off... :explode:

In other news, Ivanka Trump's clothing and fragrance lines are "skyrocketing":

Every time he does something positive, I fear that they get more enraged and dangerous.

Imagine when he starts cutting off the freeloaders that aren't actually disabled...

Thankfully he is empowering our law enforcement folks as well.

It seemed like that was how the campaign trail was as well, but teflon Don just keep deflecting it.

I'm not saying anyone deserves to be harassed, but if she is actually surprised that some creeps sent her lurid messages after she posts close-ups of her tits on ebay, then she's an absolute imbecile.

I'm with you eddie, I think she knew exactly what she was doing.... and likes the attention from all but the most scary/creepy.

It seemed like that was how the campaign trail was as well, but teflon Don just keep deflecting it.
Click to expand...
No doubt. I have stopped watching the news regularly because outside of Fox, it's nothing but trump-is-evil, all the time. And I know that none of it will make any difference in the long run.

The press is just having a field day... simultaneously mad that they were ineffective at steering the campaign (being proven both wrong and impotent at the same time HAD to be humiliating), and thrilled that there is the potential to gain eyeballs on their ever-irrelevant medium as they concoct new hit-pieces on a daily basis. NBC has a mad-gasm every single night.
Last edited: Mar 8, 2017

Well and I'm sure it helps sell her stuff better as well..

That being said, we shouldn't condone people acting like assholes, though suddenly acting surprised that the internet can be a bad place is a little transparent. Mmhmm she needs to wear something transparent!

Oh damn it now I'm one of them.

NSA said:
Oh damn it now I'm one of them.
Click to expand...
Judging by the veins, they already are transparent.

You don't have self respect, you don't get respect.

Why is it always the ones fighting so hard against something are always secretly doing it themselves? 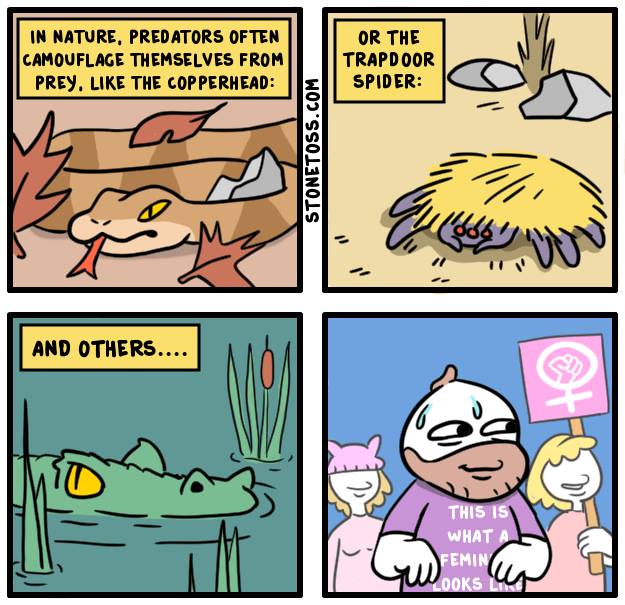 No different from sliding in with the friend angle.

It also found pedophiles were more likely to have non-detached earlobes
Click to expand... Here's another good one..

It also found pedophiles were more likely to have non-detached earlobes
Click to expand...
😲

But seriously, I'm gonna have me eyes glued on peoples earlobes now. "Stay away from my kiiii-! Nevermind."

So what you won't hear, because "HATE SPEECH!", is that a pretty big percentage of LGBT people are pedos. I wish I could remember which Molyneux vid I learned that stat.

Wife says I should start eating vegetarian, then complains why those hippies tied to the BBQ.