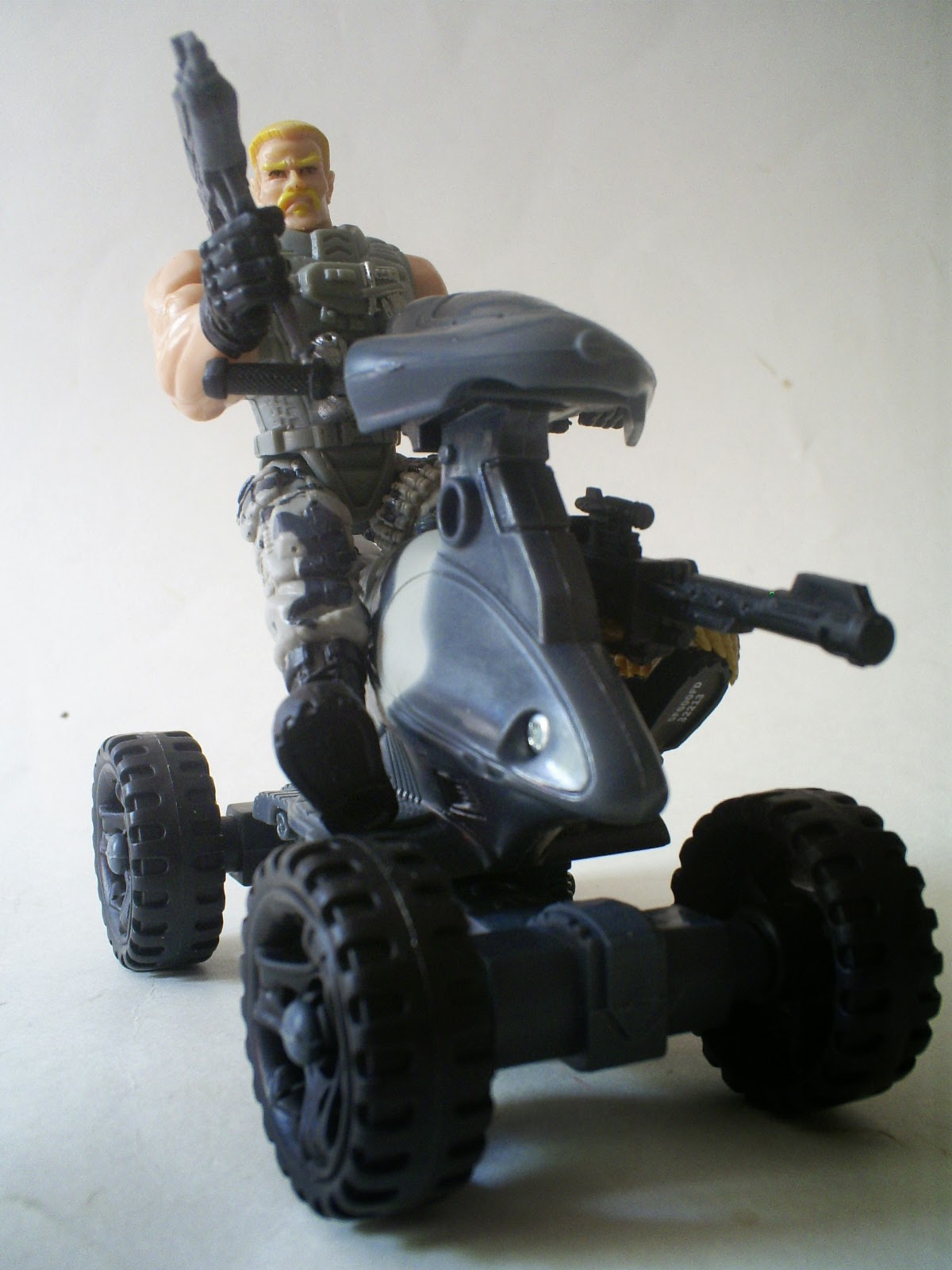 This is a tough one.

On the one hand I like Smash's sculpt and look but his limited articulation irks me, which is ironic considering that the Heroes of Olympus figures have fewer joints. The difference is, their articulation is interesting and smartly executed but here, the limited planes of movement (essentially everything moves forward/backward or up/down depending on your perspective) mean it's very difficult to do anything with Smash but have him standing or sitting in an almost identical pose. A waist joint or extra dimension of shoulder movement - as found with the Lanard CORPS! figures - would have really added greatly to Smash's articulation. Sadly though, what we have instead is a fairly limited, relatively un-pose-able figure.

What then of the ATV?

As I mentioned above, if the concept of an ATV with a cannon strapped to its side is one you can accept then you'll probably be OK with this toy. I personally dislike the ''swan neck'' design (it looks to much like a jet ski or, as I said, moped for me to take seriously) but the rest of the vehicle is fine. And that's pretty much what this entire set is: OK. Fine. Acceptable. Tolerable.

I'm not going to get too upset about this set, given that it retails at $6 (and in its defense, it does feel more robust and solid than similar offerings from Lanard's line) but unless you really, really like combat ATVs or you're a fan of retro figures then there's really not much to recommend here. As I said above, you can apply all the middle of the road adjectives you want to this set and you'd be perfectly on-point. It's not that there's anything massively wrong with the figure and vehicle (especially at the price) but both also lack anything to really get particularly excited about.

A textbook definition of ''it is what it is.''

Thanks for the review, I've been thinking about picking one of those up for a while now, but the pics out of the box have changed that to a no go.

Vindicare86 said:
Thanks for the review, I've been thinking about picking one of those up for a while now, but the pics out of the box have changed that to a no go.
Click to expand...

Yeah, I'm wishing I'd picked up the bike and jet-ski/launch vehicles when my TRU had them (this was the last of the $6 vehicle packs they had), as I think both would have been better than this. As I said in the review, it's perfectly fine for what it is and if you like the photos you'll probably like it. If not, then you won't.

I'm still hoping to grab some of the larger vehicles (such as the launch/speedboat-type thing) and this hasn't put me off the True Heroes sets. It's just not a particularly exciting or interesting choice, is all.

Thanks for sharing the review!

Monkeywrench said:
Thanks for sharing the review!
Click to expand...