What's everybody up to?

pcsguy88 said:
You have to see Yellowstone once.
Click to expand...

Pretty sure I did go there, unless you were talking to Dan.

NSA said:
Pretty sure I did go there, unless you were talking to Dan.
Click to expand...

Like I would talk to you.
Reactions: NSA and ThunderDan19

Happy Thanksgiving everyone! Hopefully your state lets you see friends and family!

Happy turkey day back at ya!

We zoomed with family for an hour. It was ok, and it beats getting the 'rona.

We did exactly.. nothing. Well, not entirely true, did some stuff around the house, made turkey soup, did some crafts with the kids, and then watched a couple Mandalorian episodes and I filled some COD fools with lead.

Families didn't do anything this year, so we just stayed home and had a quiet day. Weird as hell, but kind of nice at the same time.

So on this last day of 2020.. Anyone have any good reflections on this once-in-a-hundred-years crazy year? Feels like we really got a little bit of everything.

Holy crap, where to start? Here's my Top-10 summary:

Overall it wasn’t such a bad year for me since I live in a rural area and only work part time since retiring from state police in 2018. I seriously think that the worst is ahead of us should the senate fall as well to the marxists. I only worry so much because of my children and their children. If it was just me I can take care of myself pretty good. Let me emphasize that I have had a blast with my grand babies this past year because they let you get in the floor with them and forget about politics and COVID-19 and the swamp as you set up battle fields or train tracks and hot wheels cars. I even introduced them to an old Evil Knievel stunt bike and home made ramps. I have to add one more thing, I’m a Christian and I know who wins in the end so that keeps me from worrying foolishly (sometimes) and gives me a place to return when the world spins too fast at times. I wish you fellas all the peace and happiness that I have experienced in Jesus Christ and wish you a wonderful 2021!
Last edited: Dec 31, 2020
Reactions: NSA and ThunderDan19

Yeah, I haven't had a bad year either for many of the same reasons; I live in a rural place, my business can run basically contact free, demand for space has actually increased, and nobody close to me has been sick or had any major negative ramifications (aside from big work/life inconveniences). If this is the worst year ever, I'm golden.

I too worry about the ramifications of the Left getting in charge. Removal of filibuster, DC/PR being made states, stacking the senate and supreme court for starters, but that would just be the prelude.

The next steps would printing money for "free everything", skyrocketing debt and inflation, open borders and amnesty to create tens of millions of new democrat voters, new foreign wars, the nanny state, the surveillance state, the over-regulated state, race-based priority of gov't funds and services, "reparations", castration of 1st & 2nd amendments, further intrusion of tech monopolies on what we can say, think, & discuss, and government being able to suspend basic rights for every little thing, including the "climate change" emergency.

It would be a cluster that would take generations to undo, if possible at all. And all of that is in the hands of GA. Lord help us all.
Reactions: Sgt301 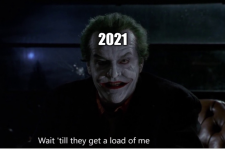 Well I am not really expecting 2021 to be much different, maybe a few more I can’t take this anymore killings, beatings & other quit your bitching acts.

Good riddance to a terrible year Hopefully some good will come out of this. But China gave us a virus that killed a lot of good people & we in turn restored their puppet leader to the White House to cement their rule over the free world. It’s like a bad episode of GI Joe.
Reactions: NSA

You won’t hear from those b@starts for years!

Would anyone have an idea on what I can do to try and fix a thumb drive? Is there any way to recover files that are suddenly "not there"? I know this sort of thing happens if someone removes the drive while something is being written to it or without officially "ejecting" it before removing it, I have done neither of these things, but I can say that one of my kids didn't screw with it.

Bring it to staples or on of those tech fix it places, they may be able to scan the drive for deleted files.

There is recovery software you can buy (or it's often offered free for a year or two with the purchase of a memory card). I've never had much luck recovering squat though.

The memory card in my phone died this week as I was prepping my info for moving it to a new phone. I was able to read it with my computer, but my phone would no longer recognize it. And neither device would format it. SD cards are pretty finicky, even the high-end ones. I always buy top-end, name-brand cards, and they invariably give up within 24-months of regular use.

Thanks for the suggestions guys. I did a google search for recovering lost files on thumb drives and found a fix....but I have no idea how complete it is since I can't remember 100% what was even on the drive (it was full of tons of stuff). But I guess if it's not there, it's not there and I'll just have to deal with it. Also, each file is saved as a .chk file, so I have to open it in photoshop (if it will open) and resave it as a format that can be read....which is going to be pretty time consuming. If it wasn't originally a file that PS could read, there's nothing I can do with it unless I try every program I have to figure out what it originally was.

Odd.. yeah, those little sticks are hit or miss. I've had some that are still working decades later and others that give up the ghost rather quickly.

Just think, if you can't remember what you're missing, maybe you didn't need it anyway.

Of course he needs it, it's his Bitcoin password. Now he's screwed!

If you have 220 mil of bitcoin, maybe don't store your password on a thumb drive, and definitely don't casually forget it like this goof.