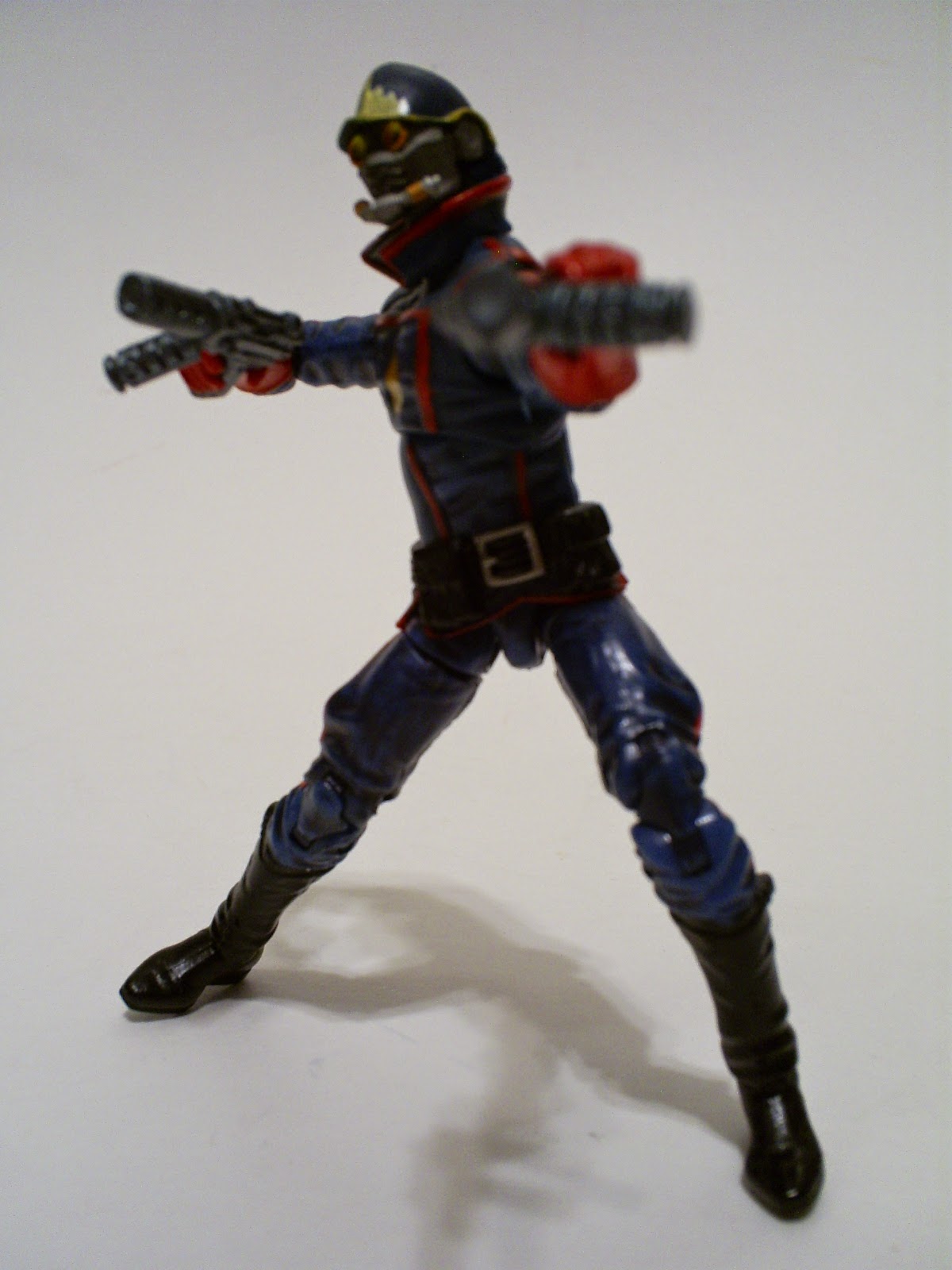 I found it an interesting experience to revisit the Marvel Universe line after such a long absence. And I have to admit that I did find myself enjoying posing Star-Lord much more than I expected to. I had memories of the hip/cut-thigh rig being a nightmare to pose and, whilst it's still not my favorite set-up, it's not as bad as I recall it being. I was also surprised at how pose-able the figure is. As you may have noticed, we've been doing a lot of LEGO and Imaginext Reviews and whilst both those lines are great fun, their figures aren't exactly what you'd call ''highly pose-able"so it was refreshing to play with a figure that could be posed in a variety of stances.

Anyway, what about Star-Lord himself?

The first thing to point out - although it's pretty obvious - is that this is not the movie version of the character. Hasbro has produced plenty of toys featuring the cinematic Star-Lord and his cohorts but this is not one of them. So does that mean the figure is worthless?

It depends on your perspective. If you're solely a collector of cinematic universe Marvel figures then you'll be disappointed with this toy, as it's not ''your'' Star-Lord. But if, like me, you tend to be more of a classic/comicbook collector, then there's a lot of fun to be had here. Sure, I'd have liked to have seen the original, Silver Age Star-Lord, complete with his 70s grooviness but this version will do for me.

I have to admit, though, I find myself on the fence regarding the asking price of the new Marvel figures. To me, $11+ is a little steep for a single-carded 3 3/4'' figure, especially when there are other lines that offer more for less. But that's just me and if you're a collector of the Marvel Infinite/Universe lines then you've, I'm sure, already come to an understanding on their pricing.

If you're new to the Marvel line then this probably isn't the figure for you. It's a neat toy, for sure and the look is cool, his articulation offers a lot of play/pose value and he has a good paint app. But this Star-Lord isn't the movie version and if you're not familiar with the character then chances are you'll be left cold. If, however, you're a fan of the Marvel line - and more specifically, you appreciate their diversity when it comes to including more obscure characters - then there's a lot to like here. As I said, looks-, articulation- and paint-wise, he's a really good figure and if you're looking for a comic version of Star-Lord, then you'll certainly appreciate this.

This Star-Lord isn't going to win any converts to the Marvel figure line but if you're a collector or a fan of the comicbook Star-Lord, then there's a lot here to like.

Great Review bro. Thanks. This figure stays on my I'll pass list. If I got one, it would need to be a movie version. That is my only exposure to the character.

Meddatron said:
Great Review bro. Thanks. This figure stays on my I'll pass list. If I got one, it would need to be a movie version. That is my only exposure to the character.
Click to expand...

Yeah, I picked up the 4 ''figure'' pack (in reality it's 2 figures and 2 accessories...) in about 2011 or so. I think they announced the movie about a year or two later, though. I just bought it because I was going through the BUY ALL THE TOYS! phase...

Good timing on the review if this is from the set from a few years back. I think the Infinite version that is out right now is just a repack of this one.

It is, yeah. They basically split the 4 ''figures'' into 3 ''new'' releases - Star-Lord, Drax and a double-pack with Rocket and Groot.