Fuck Star Lord. That bitch is a Cobra hostage with only one fate, a bullet to the back of the skull.

Ugh, I may buy some for the dinosaurs... Sucks because compared to Kenners old molds, It's like Hasbro is not even trying...

Should not complain, At least there is a toy line.

I certainly expect the Rexes to be underwhelming when compared to the behemoths that were the Kenner Rexes (I still want the Bull Rex that eats figures. I never got one when I was a kid, and I really hate that I still don't have it) and there were of course a few other dinosaurs they did well, but not every Kenner mold is fantastic. A lot of stuff was out of scale even back then (although Kenner certainly tried a lot harder to keep scale than Hasbro did with JP III). For example, the old Kenner Spinosaurus was terrible. The snout is wrong, it's way too small, and the legs are sculpted in a dynamic pose that makes getting the thing to stand up properly difficult. There was also an enormous figure of the pachycephalosaurus from The Lost World that I thought was weird because the one in the movie was much smaller. Then there is the Lost World allosaurus. It's really cool, but too small. The carnotaurs for both lines have inaccurate hands/arms, and are both too big for their scale (but still cool, especially the JP I version).

With that said, from what I can tell, it looks like the Jurassic World line will be an improvement over the terrible JP III line, which had out of scale dinosaur madness that still does not make any sense, and human figures with terrible actor likeness (a problem in the Kenner lines too admittedly), terrible accessories (push rockets? really? the figures can't even hold them!) and some figures were characters who weren't in the movie who can't stand up (The JP III army general is one of the most weirdly sculpted action figures I've ever seen. His arms are sculpted to hold his push rocket gun, but his legs are sculpted in a dynamic pose that leaves no support for his center of gravity, causing him to fall over even when he isn't holding anything.) Furthermore, the first two movies had toy lines that had a plethora of humans, JP III had very few in comparison. It looks like Jurassic World is only going to have a few different Chris Pratt figures.

Looking at some of the Jurassic World Dinosaurs though, one thing that I think will continue to be an issue is their inability to stand up. Their sculptures, just like with JP III, have gone mad with the dynamic pose thing, and getting the dinosaurs to stand will most likely be an issue. Expect Raptors to be on all fours with their ass in the air, and T-Rexes laying on their sides.
Last edited: Jan 24, 2015

I think a lot of the scale issues back in the JPI days were more on the film designs, the Utahraptor-sized Velociraptors being the big one.

Didn't stop me from having a Raptor, though. Think I had one of the Dilophosauruses, too.

lancelot said:
(I still want the Bull Rex that eats figures. I never got one when I was a kid, and I really hate that I still don't have it)
Click to expand...

I've still got mine from childhood. I love that thing. One thing I don't like is that the tail was folded over to fit in the package. It still has a crease in it to this day. Anyone tried to convert the RC Jeep into something that hold Joes? 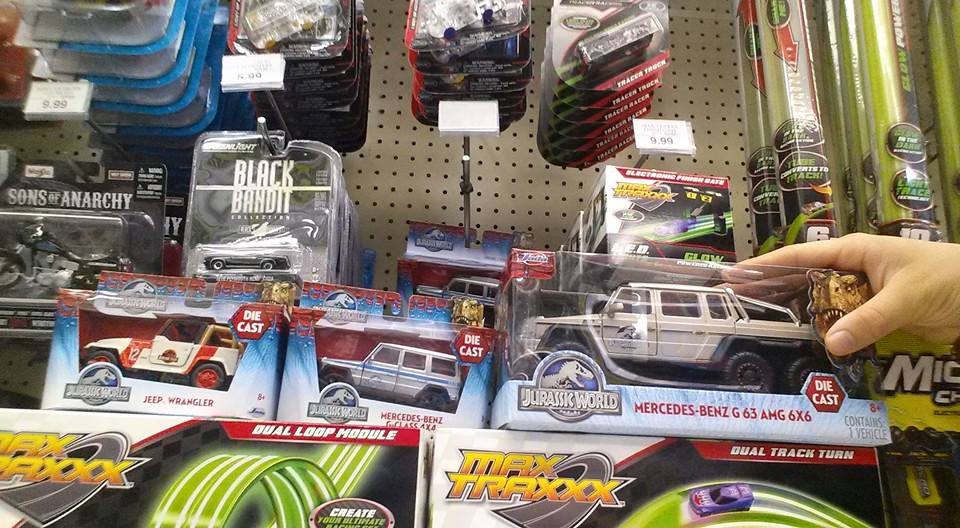 While not the size of the old Kenner mold that I still really want...this might work for my Harry Dresden custom...at least it's cheaper and the figure could ride on the back.

Maybe I now have a dinosaur for my Batcave.

That would require me giving a crap about finishing it.

Videoviper said:
Anyone tried to convert the RC Jeep into something that hold Joes?

EDIT: There is a die cast jeep (smaller) & a RC one is scaled with Joes.
The 6x6 would need mods
Click to expand...

^
I haven't seen one on shelves , I wish that Mercedes truck was 1/18, man that thing is Bithcen !

Even the larger scaled dinosaurs were smaller than I thought they'd be.

OK so my kid had a birthday party this weekend. (Happy Birthday VV Jr)

The first dino he got was the velociraptor, works fine with Joe scale (avoiding the rand about how real velociraptor didnt look anything like that.)

The next 2 dinos he gets are weird mixes of different dinos. Not sure if this is involved with the movie plot, I know they made a new dino that turns into the big bad guy. But these little guys look like regular dinos with the wrong head?

Never looked to closely at the toy before this.

They did produce some more 'geneticly modified' animals for the toys. Some of them you can glimpse on computer screens in the lab at points too.

darthdre758 said:
They did produce some more 'geneticly modified' animals for the toys. Some of them you can glimpse on computer screens in the lab at points too.
Click to expand...

so not learning toys for the 3 year old.

Videoviper said:
so not learning toys for the 3 year old.
Click to expand...

Well...no. Why would you think something based on a movie, made by a company who's big properties are robots that change in to cars, and a ficticious military special forces team who's biggest threat is a guy with a speech impediment would be educational?

Hit up the Discovery Zone section at TRU if you want that.

darthdre758 said:
Well...no. Why would you think something based on a movie, made by a company who's big properties are robots that change in to cars, and a ficticious military special forces team who's biggest threat is a guy with a speech impediment would be educational?

Hit up the Discovery Zone section at TRU if you want that.
Click to expand... 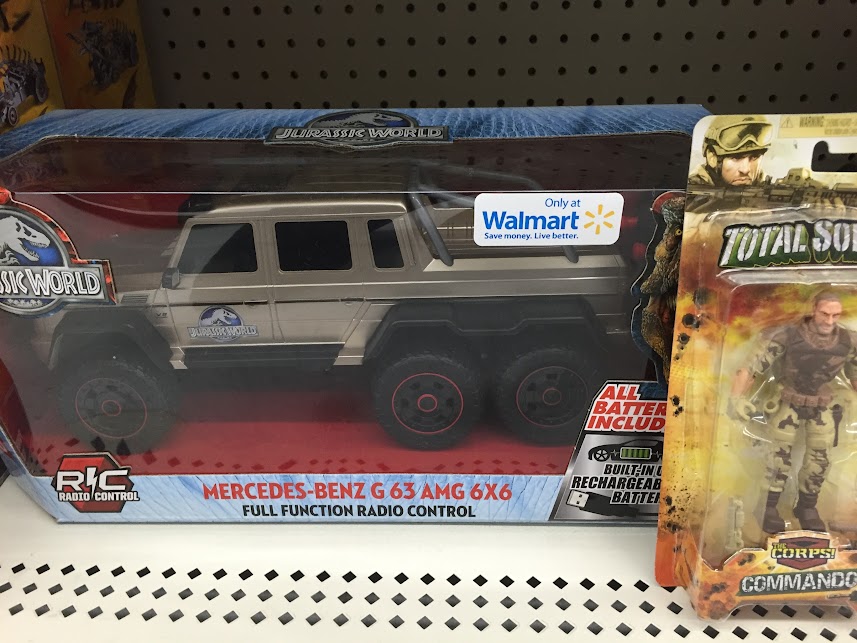 Still kind of small looking, but should be fun for the kids. I saw a review of the RC Jeep Wrangler and it did not go over grass at all, so you guys get these things just know you'll be on concrete and pavement only.

Yes the 1;24 ones won't work at all, but the RC versions are larger & could fit a figure making it a Joe scale vehicle.

They showed a bunch of new shit for Jurassic World. The only thing of real note is this sweet scoped Marlin M1895SBL that comes with Owen (purportedly 4") in a $20 set.

I don't know, I thought the new retooled and repainted Indominous was kind of neat. It's certainly better than the last one. The only thing about it I don't like is the weird chomping action, because of the movement the neck makes. It's too mechanical. Other than that it looks pretty cool. Unfortunately I guarantee that both that rifle and the new Indominous won't be as well painted as these prototypes.

I'm still trying to wrap my mind around how 23 year-old dinosaur toys can be better than ones made this year.

Join the club! Screw holes, bad details, the inability to stand up, shitty paint, no humans or vehicles at an appropriate scale until a full year after the movie has already come and gone (and even then it's only one) the list goes on. Hasbro must have thought Jurassic World was going to come and go like G.I Joe and Battleship did, so they half-assed the one movie tie in toy-line they should never half-ass. It's the only explanation I can come up with. Cha Mei's stuff was overall better than what they sold last year, and even this year their offerings are piss poor overall. I feel sorry for kids these days. They had it good back on 2008 with the Clone wars, but ever since 2012 toys in general have sucked, especially the Hasbro stuff! Even the Jurassic Park III toys are superior overall. You can never underestimate Hasbro's ability to disappoint.

Since I haven't seen it pictures here. This is the Owen set Not sure what i'm going to do with a dinosaur. I might find a use for the motorcycle.

Blah, only want the gun.

Bump because I don’t feel like starting a new thread. Move if needed.

hole. They Jeeps no longer look like this. I got the new Jeep today. 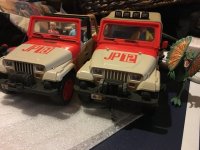 swapped out Nerdy’s jeep without the working winch with the older toy. Then started painting missing details.

They are about to release the Explore with a T. rex & all indications are we will be getting the kids at some point & maybe some missing cast members. Here hoping for a lawyer/outhouse combo.

At the rate they release humans that I want it’s an easy collection.
Reactions: Sgt301


Spared no expense! Hired Mindbender to clone instead of Venture. 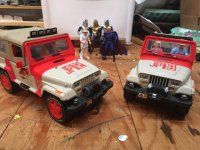