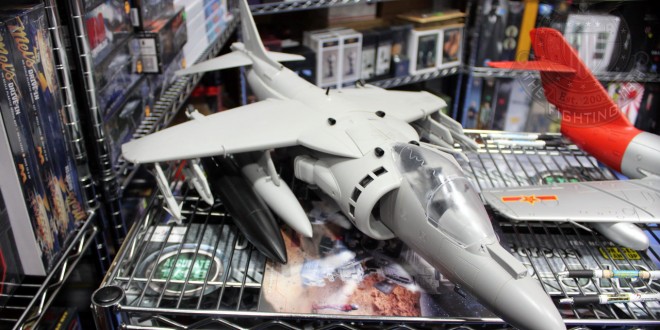 This is the big one. The whole enchilada. The one with gusto. The.. well, you get the point. This is the reason I went to Comic Con! (Well, that and the people watching, of course).

Merit showed off the AV-8B Harrier last year at SDCC, though it was admittedly a very early mock-up at that point. Fast forward one year and here we go! The Harrier has been improved in almost every way imaginable in that year. According to Merit, there were a number of flaws introduced into the model during the design phase in China. Working these out resulted in the delay that we’ve all noticed.

As you can see in some of the below pictures, the fuel drop pod was clearly over sized last year, and has since been adjusted to fit to scale correctly.A number of other similar issues popped up here and there, and have since been amended, or are in the process of being fixed. Merit is very keen on making sure the model is as accurate as possible before releasing. Obviously there will be changes and sacrifices that need to be made in order to keep it at the target price ($199-$229), but they want to do all they can to make the most amount of collectors happy. 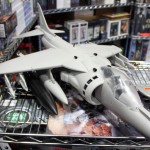 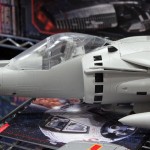 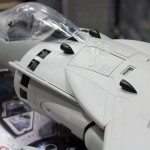 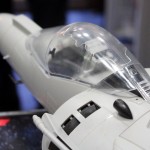 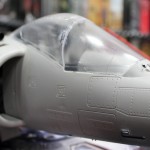 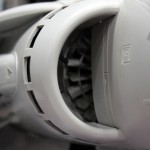 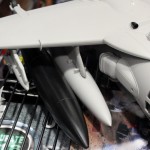 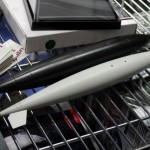 Seeing the model in person, there is tons of small details. Lots of panel lines, rivets, etc. There are also tons of moving parts, the turbine inside spins, the intakes moves, exhausts moves, everything seems a lot more linked together than last years version. They are currently working on finding a way to get the cockpit to retract realistically, the smaller real estate has made it more difficult thus far. Also, the nose cone will *NOT* be removable like the F-14. I will come back to the point a lot, but the Harrier is *the* perfect size. It’s going to be a lot easier to display on a desk, or shelf, or what have you, especially compared to the F-14A or F/A-18’s.

Merit also spent a lot of time putting details into the other parts of the plane. There will *NOT* be a full lights package with the Harrier, though there is a small LED in the tail that you can turn on. This should help cut down costs and remove excess wiring/etc inside the plane. The weapons system was designed with pegs, so they should easily snap on and off. Movable fins/etc will be all the rage when this comes out! 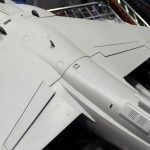 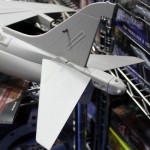 Portion of the tail was missing 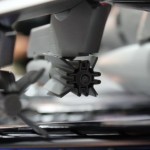 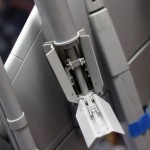 I was promised that the multitude of landing gear included with the Harrier *WILL* support its weight, and be fully functional. From the small demo I saw on the show floor, I am already convinced. They are putting a lot of design time and effort into the landing gear this time around. There are small springs in the wing gear, and everything retracts back into place pretty easily already. Obviously this is a work in progress, and there is still some ways to go, but compared to a year ago this model is a night and day improvement. 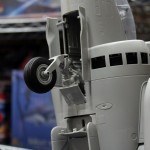 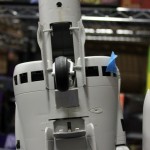 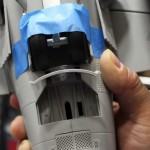 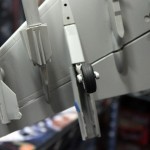 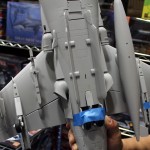 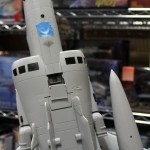 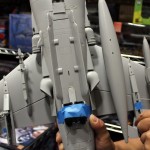 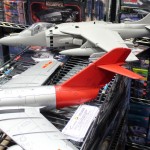 The current goal is to have the Harrier released roughly around Chinese New Year 2015 (February). The Harrier will be released as a pre-built and pre-painted model first, with a kit version following at a later date (Think of the 1:18 SBD). The first paint scheme has not be decided upon yet, though it will be revealed, hopefully soon! This is Merit’s marquee 1:18 scale release, and they want to take their time to make sure it’s correct (aka no spot cat debacle). From my limited time with it at the show, I think they’re making great progress, and can’t wait to take one home and display it (Did I mention how great the size is?!).

A huge thank to Tony @ Merit International and Legends Toys & Hobbies for always being so accommodating to us at Comic Con and beyond!