You are using an out of date browser. It may not display this or other websites correctly.
You should upgrade or use an alternative browser.
J

YautjaClanLeader said:
What's unfair is how brittle and fragile these are compared to the Neca ones for close to the same price. I'd rather pay a little more and get the Neca ones which are a lot more durable, have better paint applications, and much more accurate head sculpts. Those are my biggest gripes with this line.
Click to expand...

I like neca. I love their ideas and they make a great product. They're headquarters is 2 towns over from me in nj. I've meet some of the people that work there at local toys r us n shows. But my entire collection is 1/18 and I def want a 1/18 predator to fit with everything I already have. For a small figure hiya has great paint apps. Only complaints I've heard were some of the joints need a hair dryer to work loose, legs specifically and the feet suck they don't wana stand on their own but other they that hiya has great details as well. I do agree on prices though how they can be close to each other in price sucks but all 1/18 figures are going the 20 to 25 dollar price point which blows. It blows hard
Reactions: YautjaClanLeader

Dropshipbob. Yeah totally agree its Not nice timeframes get pushed back. However pretty much every company is doing that constantly.
Look at Mezco, Look at ThreeA for starters.
Alas simply put it is par for the course.
Ideally they showed the prototype and next we hear they are ready to roll. However it appears getting those PO is more important to these companies.

YautjaClanLeader, I get the Neca are better but again just the scale differences makes a huge impact on what is possible.
Again my point with using Hot Toys snap kits. Same scale as HIYA and paint application fails, brittle and fragile and Not screen accurate head sculpts or their camo was not perfect trying to capture the film camo. That Hiya went with something totally different I honestly do not have issues with.
Paint applications fails Can be levelled at pretty much Every brand that makes figures too.

HIYA have never produced TOP notch figures, look at their 101st OURWAR and the WW2 Germans.
As for price increase, alas that is pretty much on Everything but HIYA are still cheap enough.

I get that time frames change, but HIYA keeps resetting theirs every 4 months. Just say it's two years down the road and then if you actually come out with the product much earlier, then you look like you kicked ass and pulled it out of the fire and everyones happy.

Pre-orders seemed really important and they lost mine because they kept jerking things around. Now....I'm not saying MY pre-order was the most important NOR the only one helping the situation....BUT....I'd be almost positive I wasn't the only one who canceled their PO for that reason.

In the end, I try to keep things in perspective, it's just a dam toy. HIYA's going to do what they do and I'll just have to watch how things go.

I saw pictures of HIYA's display at Toy Fair, looks like the APC may actually finally be coming out. They had a few of their Marines and two creatures plus eggs from Alien: Covenant. Don't care about the latter except the facehuggers that are supposed to come with the eggs, but that APC.....man I'm trying not to get my hopes up.

Question for anyone who bought these how is the quality?
I heard mixed reviews of the DC stuff thinking of finally pulling the trigger on this. My preorder was stuck in perpetual hold until I finally got tired of bbts & saw the same stuff on amazon & eBay

As you could probably tell from earlier comments, the only ones I have are some of the Predators, one alien and one colonial marine (the two later figures are from the USCM computer game). I haven't messed with the Marine, but the alien and Predators are nice. A few of my Predators had problems with stuck/frozen joints, but a bath in hot water fixed that. My only remaining problems are with the ankles on the Predators...they suck. Very rubbery feeling joints that don't really help the figures stand up straight. These same joints also don't move very freely even after the hot bath and I think I've come pretty close to breaking a few. Part of this is because there isn't a lot of clearance for the ankles to "roll around" due to the leg armor.

Fuck I just saw this again and it triggered me something fierce. My own post!

I saw a post on FB of what could have been a picture of an ALIENS queen. I hope it's one they are making, but I can't believe nothing has leaked earlier of them making this, no proto, no master sculpt, no two-up....nothing. Hard to believe they just "suddenly" have a painted master.

When they first started they had a preview of upcoming aliens. Just black outlines (scaled?) of the different aliens including the queen. But they took to long to bring anything to market & funko & even Landard beat them to market

True, but Funko and Lanard would be no where close to what HIYA could produce in terms of detail and articulation if they would actually do it. Lanards queen is way too big, cartoony and has cankles and Funko's is too small and deformed looking.
J

It’s not bad. The old Kenner queen that came with the slime trap is pretty good looks and size wise. It’s like 50 bucks for the playset. However articulation wise she can’t compare. I was actually surprised my lanyards queen. It really isn’t terrible for 20 bucks with a good paint update of course

SO! The latest Predator comics got me really inspired for 3.75" Hiyah predator line. I think I might collect a couple and some JoyToy 1:18 Navy Seals.
Reactions: Preacher13

Jersey John, I agree on the old Kenner queen, but only if you are using it with the Funko figures. No way does it look good with the HIYA figures. There is a Revoltech queen that's probably good scale wise. Hot Toys released some Predator figures years ago and had a BAF of the queen to go with them. I have that queen, but she's a little on the large side....I'm not sure she really scales well with the HIYA figures. Untill I get a Revoltech, or HIYA makes their own, that will have to do.

They will be announcing new products on Monday, at least one thing from aliens & another from predator.

I thought they had already announced they were doing figures from the first AvP movie, as well as Predators?

Forgot to mention I received the ALIEN Covenant eggs and facehuggers set a few days ago. I'm not a big fan of the egg design, but the facehuggers still look pretty much the same, and that's what I really wanted it for.

I will just leave this here. 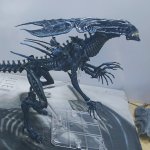 Videoviper said:
I will just leave this here.

Nice! Is that Hiya?
Reactions: Videoviper

Yup that's why its in this thread, (& not one of the other 1:18thish scale alien toy threads.)

She almost looks like the NECA Queen, especially in the feet.

But I don't know why they would do that...so don't mind me.

If they make her, this should be great! I wonder how long it will take and how much she will cost.

Looks good. Was someone looking for 1/18th scale starship trooper helmets? Cause I found them

And yes, I was looking for SST helmets.

Looks like preorders are up, Dropshipbob . I'm not an aliens/predator guy, but when I saw these, I knew you'd be all over it.

They look great, but since its Hiya I look forward to seeing these in 4-8 years.

nacho said:
Looks like preorders are up, Dropshipbob . I'm not an aliens/predator guy, but when I saw these, I knew you'd be all over it.

Yeah, I just saw those myself. I'm not interested in the AvP or Predators installments, but the ALIEN/ALIENS have my interest as always. I'm just glad to see them still pumping out additions regardless.

It's October and I still haven't received my Invisible Jungle Predator.
Reactions: Dropshipbob

Who did you order it from?

Dropshipbob said:
Who did you order it from?
Click to expand...

i think this is hiya, From our own facebook feed. 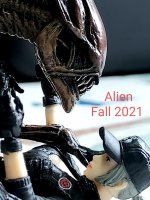 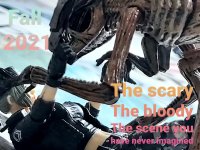 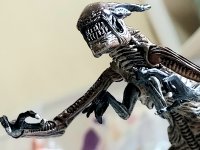 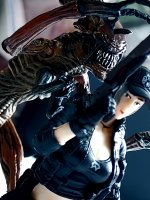 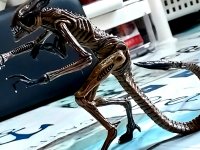