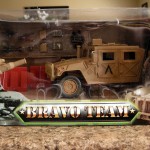 Thanks to one of our Officer's XOC2008, we have some first look photos at a BRAND NEW 1:18 scale HMMWV by Unimax/Bravo team. END_OF_DOCUMENT_TOKEN_TO_BE_REPLACED 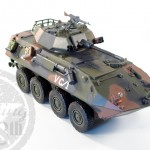 In 2008 modern era 1:18 scale fans were sent into a flurry after rumors began flying around that Unimax was going to release a 1:18 scale IAV Stryker under its Forces of Valor: Bravo Team brand. Collector's began speculating when the Stryker would be released. However, a few months ago, the unexpected happened. The Stryker was replaced with a General Dynamics LAV-25. I now have the LAV in hand and I can officially tell you about my disappointment. END_OF_DOCUMENT_TOKEN_TO_BE_REPLACED

So I went by the local ToysRus today to see if they had the new Unimax "Assault Force" 1:18 scale LAV-25, but they did not. They did, however, have the new G.I. Joe "Rise of Cobra" Senior Ranking Officers 3-packs in stock. END_OF_DOCUMENT_TOKEN_TO_BE_REPLACED