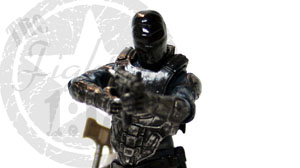 Of all the Rise of Cobra figures releases thus far, one caught my eye above all others. That figure is the Elite-Viper. Based on an entirely new character design, the figure exuded coolness and attitude. Unlike many of the movie tie-in figures, the Elite-Viper looked like he meant business.

The Elite-Viper is one of the first true “Army Builder” figures released for Rise of Cobra, and apart from the Neo-Vipers, the Elite-Viper looks to be popular with G.I. Joe fans new and old. The figure can currently be found at Targets and Wal-Marts, with other retailers getting the figure soon no doubt.

So how does this figure rate? Does it live up to the storied “Viper” legacy?

The Elite-Viper is an entirely new creation in the G.I. Joe universe, and it was created especially for the Rise of Cobra movie. Generally, with G.I. Joe and Cobra in general, the term “Viper” can refer to any specialized soldier Cobra uses on the battlefield.

The “Viper” character goes back to 1986, and has existed in some form or another ever since then. For Rise of Cobra, they have created a couple of new “Viper” characters, one of them being the Elite-Viper, who will act as Destro’s bodyguard and as a commander of lesser Vipers. ELITE-VIPERS are the personal guards of DESTRO and strict enforcers of their commander’s orders. These top-notch mercenaries have extensive military training and are skilled in the use of the advanced weaponry developed by M.A.R.S. Industries.