Yeah, I understand, I still get a nostalgia tug when I see one of the old GI Joe painted hair figures or the 70’s Evil Knievel stunt bikes

The HISS is odd beyond it's obvious impractical design. It's supposed to be a high-speed tank (oxymoron?), but I always loved when in the cartoon or comics when it was drawn bigger, much larger than the joe-scale proportions of the '83 toy, like some kind of lumbering beast. That's why when I designed my lego version for 1/35th scale Mega figures, the end result was actually just a little bigger than the Hasbro "1:18" version.

That’s pretty cool, looking at the wide tracks made me think I could reconsider using something like that as an arctic patrol vehicle. It kinda reminds me of a tactical snow cat with weapons, painted white of course.

***RETRO UPDATE *** Today I was at the Walmart on 360 in Chesterfield Virginia near Woodlake just south of Richmond and found 4 AWE Strikers on the shelf. I bought one for the motor pool so that I can crawl on the floor with my grandsons and ruin my knees

So, apparently we're getting Retro Grunt, Cobra Officer, and a blue repaint of the HISS with Rip-It (HISS driver repaint). Grunt looks very classic/basic as he should. The officer looks good too, but the display sample has the red logo on the package artwork. The figure has the correct silver logo, but why they changed the package art logo to red is baffling. I know it's a pedantic thing to get hung up on, but when you're trying your damnedest to use nostalgia to sell a product, f#$%ing get it right. It's not that hard.

I'm probably the only one around here that's getting these, but when you get a bunch of them with the classic artwork, they look cool as hell. These will make the 12th and 13th single-carded releases in the line. If they can get anywhere from 24-30 of them out, it'll make a hell of a display next to my vintage Japanese figures (there were 24 of those produced back in the day). I'd love to have 100 different ones covering a wall like the Vintage SW line. All the nostalgia of the 80's at a fraction of the price and no worries about o-ring degradation ruining the investment.

The Stalker figure from the last wave is one of my favorite 4" figures ever. Very classic looking, and the plastic isn't nearly as rubbery as many of the 25th figures I own. I've heard a few complaints about the fang pilot being gummy, so maybe I got a good one, but overall, these retro figs are well done, come with tons of gear, and scratch an itch that nothing else can. 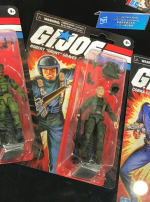 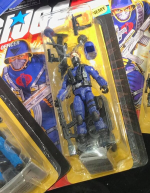 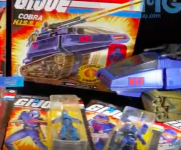 Looks like they are ramping up the accessories at least!

That mortar that comes with the officer makes me think Short-Fuse can't be too many waves away...

I wish Hasbro would get into the toy business again and put some product on the shelves. I get tired of walking the long “green” mile in the action figure aisles and seeing empty pegs. I’ve picked up a couple AWE strikers for my grandsons but I hit 6-7 walmarts to finally find the honey hole. Now if only I collected HISS tanks I saw more than 20 of those in my travels.

They quit producing during the pandemic, and now shipping lanes are jammed up with product that couldn't get out of china for a year. Hasbro is just treading water until the holidays, as toy sales are not that brisk this time of year anyway. I assume by Q4, things will start looking more like normal, both from a supply and demand standpoint.
Reactions: Sgt301

Here’s hoping, I would like to be able to find Joes like Dollar General had them several years ago. I didn’t have two grandsons back then so only bought a handful. I walked past dozens and dozens of them at the DG’s near me.

That Grunt is the one they should have released in the 25th. Looks awesome, but way late to the party.

Yeah, they didn't do a single bit of retooling for the "HISS III". I much prefer the original design in a blue repaint over the HISS 3 design, but I didn't need them to rename it that either when it clearly has little to do with a "III".

In reality, it's a zero-burger. If I get one, it'll be for the packaging, as I have plenty of blue HISS tanks from back in the day anyway.

They got $42 out of me for 3 damn figures… Maybe JoyToy prices aren’t so bad after all.

Eh, with Joytoy, you'd barely get one figure by the time you paid them to ship it.

Nacho, thanks for the heads up. I went ahead and ordered the limit of five, one I’ll keep for my banana republic, and I’ll give each of my grandsons two apiece for army building around Christmas time as these may release in October.

Would it be weird if I painted the chest logo on the officer's package art? That red is going to drive me nuts.
Reactions: Sgt301