As many of you might know, Hasbro lost the license to Jurassic Park / World to Mattel. I wont get into the reason why because most of you know why. However, Mattel without releasing any pictures has announced there plans and I for one am fired up. They will be releasing 3 3/4 action figures, collector grade, articulation. An example they gave is that Dr. Malcolm wont come with a stupid backpack net launcher. He will come with flares! They are also releasing movie accurate vehicles for the figures. Lastly, like my son said "What about the animals daddy you cant have Jurassic Park without the Animals!" They are going back to old school with the dinosaurs. There will be small, medium and large Dinosaurs. Some with action, some with electronics but there will be no tiny adult T-Rex's. Did I mention that the price point for the figures will be $10.00? Apparently Mattel understands that Kenner had the right idea and are taking it back old school. I wish them luck! All those info I found on a Blog called Jurassic Post.

I've seen some of them. Granted, the pic quality was shit, but my initial stance is still in the "Mattel knows less than nothing about quality 1:18 figures" camp. Head, shoulders, elbows and t-crotch for certain. Can't tell if there are wrist, knee or ankle joints.

The dinos are about par for the course with the last couple of Hasbro JP/JW releases.
Last edited: Jan 13, 2018

Officially revealed. I'll limit this to humans and vehicles.

Vehicle looks like it could be ok.. but I can't really tell the size.

Are they T-crotch? Some look like it but others I am not sure.

Might need to click the pic, and then "view pic" to get a bigger version. I can't tell if they're T or swivel hinge, either.

Like the lady looks full on T-crotch, but the dude looks like it could be swivel. Confusing. Funny if it's both.

NSA said:
Like the lady looks full on T-crotch, but the dude looks like it could be swivel. Confusing. Funny if it's both.
Click to expand...

I think both females have the universal hinge joint like the males. You can see the joint on the woman with the triceratops.

what does the button on the cab do?
seems sort of narrow...
J

Slaymaker said:
what does the button on the cab do?
seems sort of narrow...
Click to expand...

Looks like it activates the headlights or opens cage or both

Here is a link with pics of the current offerings. I like the truck. It has potential.

The button turns on the headlights and the vehicle has an engine sound as well.
A

Here’s the MRAP type vehicle in the line. Better scale for 1/18 figures. There’s also a photo of it next to the ‘Animal Planet’ MRAP style vehicle.

The big downside is there is no cabin. The orange button pops the cab open and there is some kind of round vehicle that shoots out the front.

Holy crap. This thing is awesome. Only other thing I would add is some type of windshield but it looks great as is. Sweet job broski

These figures brought me back into 3.75”/4” figures! I have them all,including the legacy figures..

You got Jeff Goldblum? I saw him a few weeks back and thought really hard about buying him....I mean, he's Jeff freaking Goldblum!

Yes,two of them actually,lol. I have multiples of each figure. One opened to mess with(no open toy is safe from modification)and one to hang on the wall of each style package...for example I own 4 Clairs. One open,one carded blue band “new”,one all grey card,and one rebranded Dino Rivals...I really like these figures! The legacy collection figures have only had one style package so far,so I’ve only purchased two of each of them.

My favorite figure of the JW line is the copter pilot. I have one torn apart to copy eventually. I has ideas

On the flip side tho I only have one of each of the Fortnite figures,and they’re all open. I like those even more atm,but their packaging looks awful.

I was buying them up like crazy to bolster my ranks of civilians to use in my ALIENS universe, but then I found out they are way to short when posed with my Colonial Marines, so I stopped getting them. I have Sam Neil and the lady from the first JP movie, then I have Owen and the little girl from the more recent movies. I was sooooo close to getting Wheatley, Jeff Goldblum and that scientist lady with the glasses, but couldn't pull the trigger. I really like the figure of the little girl (that sounds sick). There's not enough "little kid" figures for use in projects, and I actually need a few for my ALIENS universe. Unfortunately I've been thinking of modding her to include elbow articulation (why the hell didn't they do that? I know it's possible on such thin limbs!). I'm also thinking of turning her into Newt from ALIENS, since the one I made years ago looks like a toddler in size. Maise is pretty close to the age and height of Newt in the movie. Thing is, if I mod her into that, I can't use her elsewhere. I'd get another, but I've only seen one....ever...and that's the one I bought. She and that lady from the recent films are impossible to find.

I see Rick Grimes buck in Owen,and Carl in Maisie,..but that’s me,lol. Their construction would make it ridiculously easy to resize parts directly from McFarlane 5” figures,and graft them to these JW ones...I bought spares of wave 1 for $2 each at ToysRus when they where closing,as well as cleaned out the mercenary figures. That was before I discovered that wave 2 pilot&wave 3 mercenary figure!! They’re really cool looking,and I look forward to making Umbrella Corp henchmen from black copies,possibly repaint the copter black as well.

he’s also out of scale with the line! He’s more joe sized! The Copter Attack set is $17 on Walmart.com atm too!! 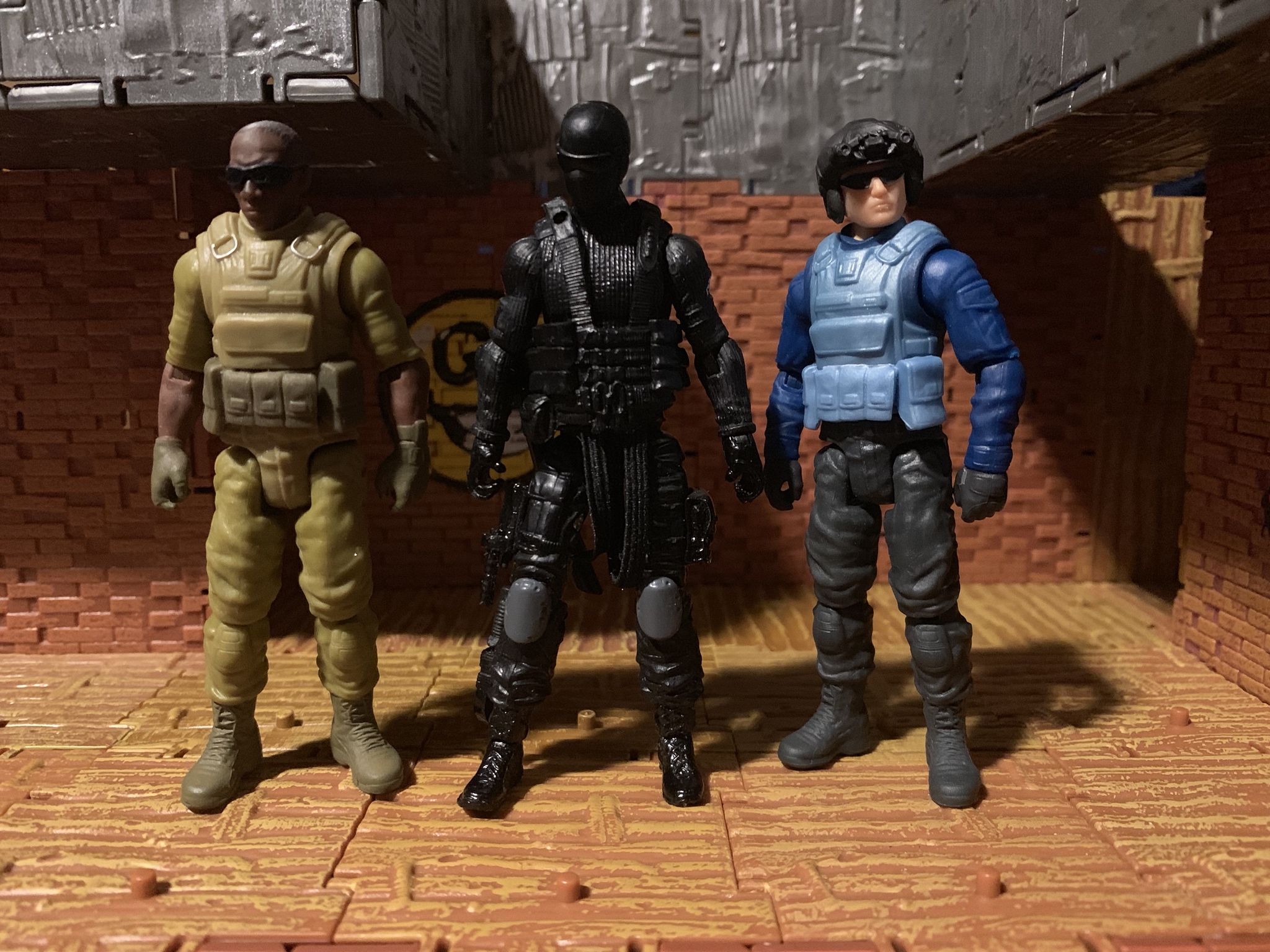 The first release of Claire was the most difficult figure for me to find. Zia,the glasses nerd, was easy to the point I’ve passed on more of her several of times...I swore she was gonna be tricky,but after I had several I realized I was wrong. [BGCOLOR=transparent]Maisie was sparse,but I managed to get one of each in both card styles,and one to open...they rebranded the line,and the entire first wave are repacks. I wouldn’t be surprised if Maisie gets a repack. My bet would be the next wave.[/BGCOLOR]

[BGCOLOR=transparent]Showing restraint on pulling the trigger on an $8 figure is pretty fuckin gangsta! I envy you there! I’m the guy that goes to Walmart to but $10 in razors,and spends $96,..never even made it to the health&beauty isle to even look at razors. have a couple marvel legends ,a hand full of JW figures,a bottle of Pepsi,and an American flag T-shirt tho! Lol! [/BGCOLOR]

[BGCOLOR=transparent]Please whoever sees this post,don’t think the Fortnite building set I’m temporarily using as a back drop is worth owning. its junk. Trust me. I haven’t been on forums or social media to post anything in years. I’m ill prepared for it,but feel pics make everything better! like tits make all movies better..that’s why everyone has fond memories of 90’s movies,..they where corny,and the effects where cheesy,but the leading lady always busted her funbags out...think about it.[/BGCOLOR]
Last edited: Dec 28, 2018

The JW/Park figures are really nice, I wish they would have given them wrist articulation.

I started cutting on Maise last night to graft some elbow joints to her....I'm almost positive it's not going to look or work very good.

Also....NOT buying figures is pretty easy at the moment. We are in the process of having a fence built on our property and it's pretty much my idea... I promised my wife that whatever extra money I could put towards it, I would.
Last edited: Dec 31, 2018

idk Why her arms need articulation? it’s a little kid..she’s not really carrying assault rifles...or at least wasn’t intended to be?

I almost bought this set just for 10min with this dude. from the waste up he looks like a JW figure. he would easily bash with one,and make a good ATF agent... 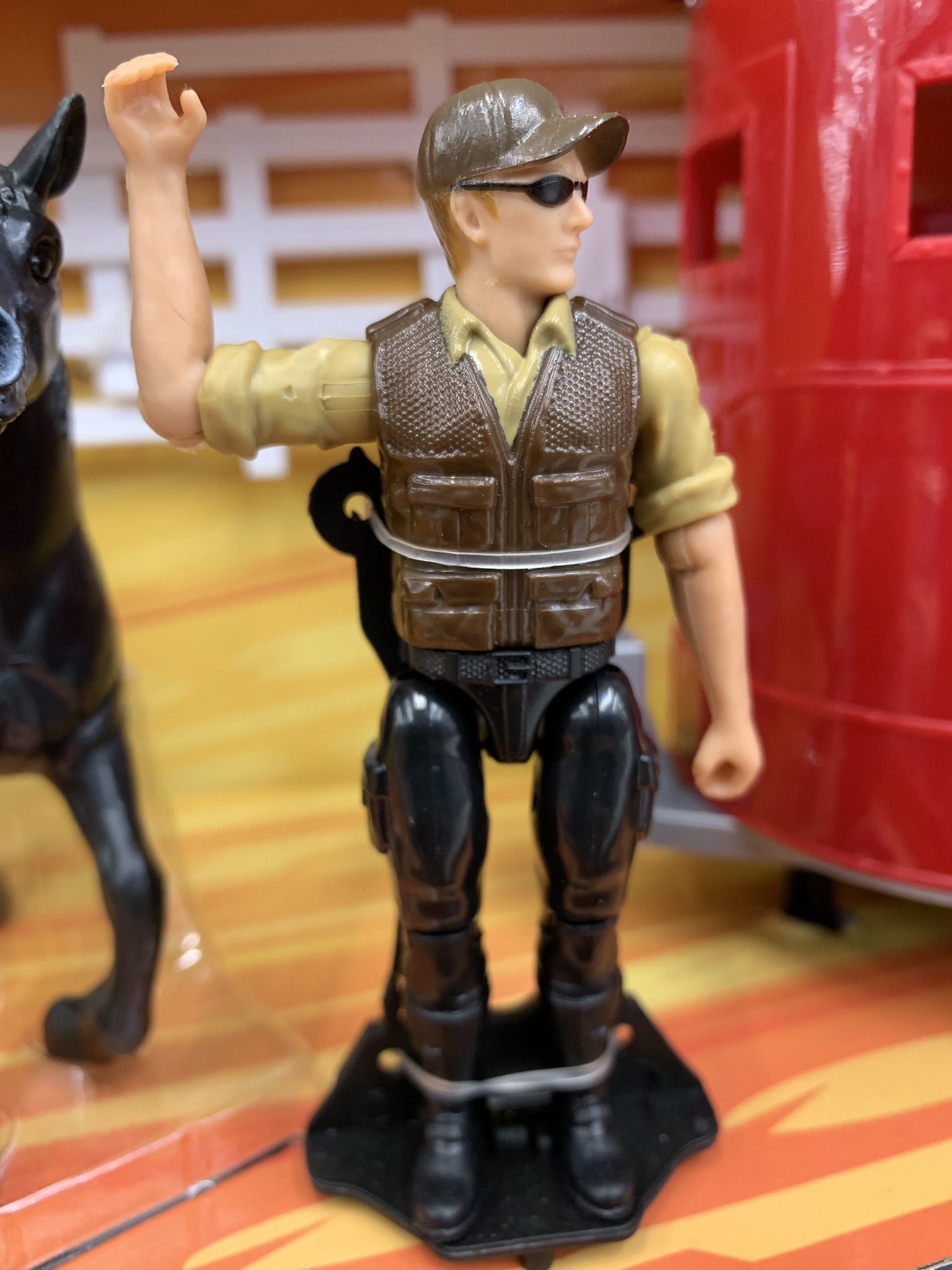 Here’s one of the Walmart Wrangler Unlimiteds with Legacy Collection Jeep wheels on it. 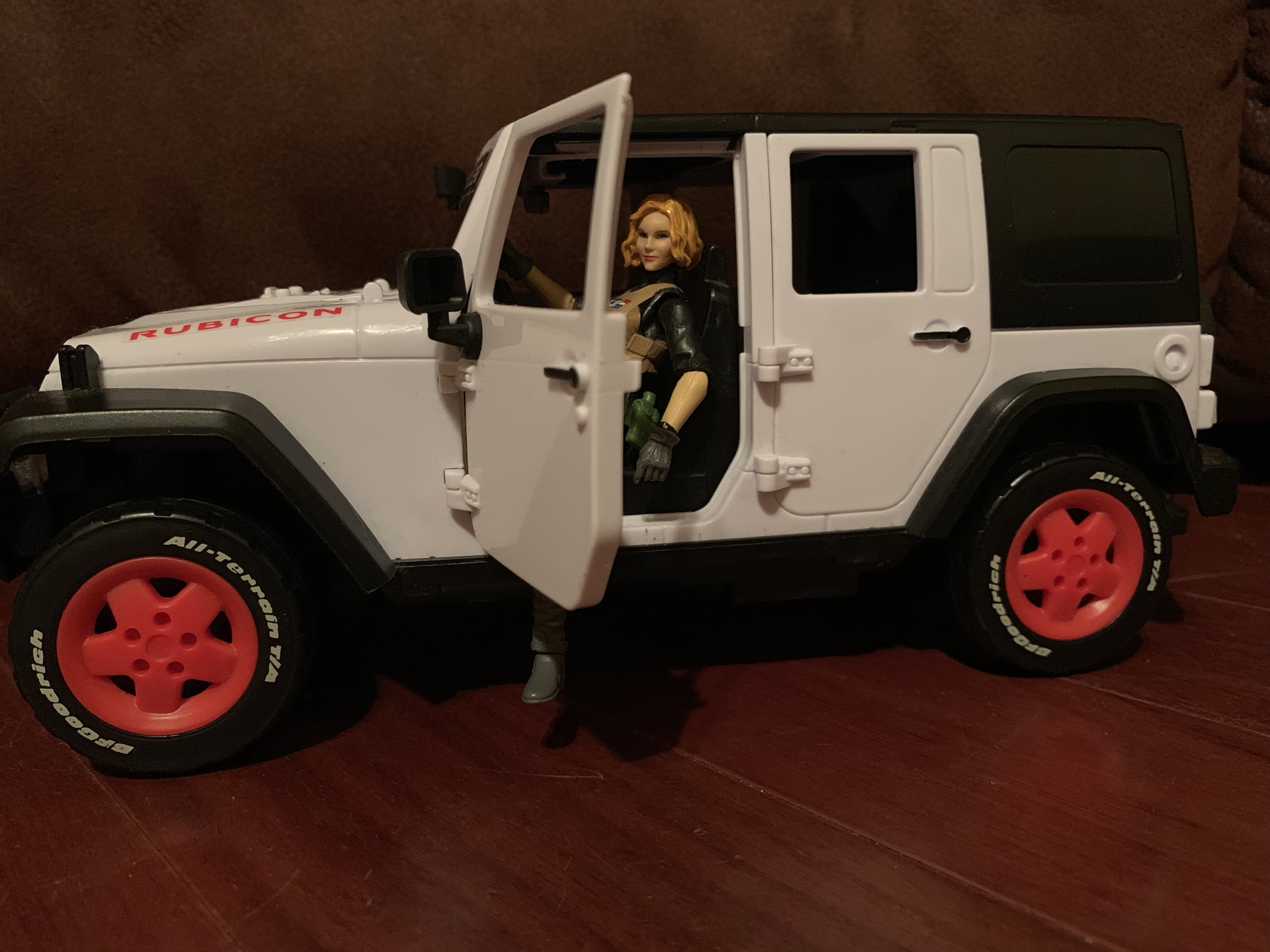 There’s a long sleeved version of the figure above that comes with yet another version of this Jeep too. The white version is probably the best so far. Followed by the green,the. The newest version which is more off-road looking,.same body mold tho. Different doors,no roof..

For my purposes, she wouldn't need articulation if I was going to keep her "as-is" for regular use. I want to convert her into a character seen in ALIENS, and for that, she needs articulation.

Those WM Jeeps were pretty cool, the only thing that turned me off were the thick wheels. The JP version was spot-on and didn't really need any mods....AND was fairly cheap. Those two things together with me deciding I could mod it for use with my Terminator stuff is why I bought it.

They used a 2007 Jeep Wrangler Unlimited Sahara in Terminator Salvation.


The hood on a rubicon is fancy compared to the Sahara model... with some sanding tho,lol...it’s totally plausible to make a screen accurate Terminator Salvation Jeep from the WM Jeep... 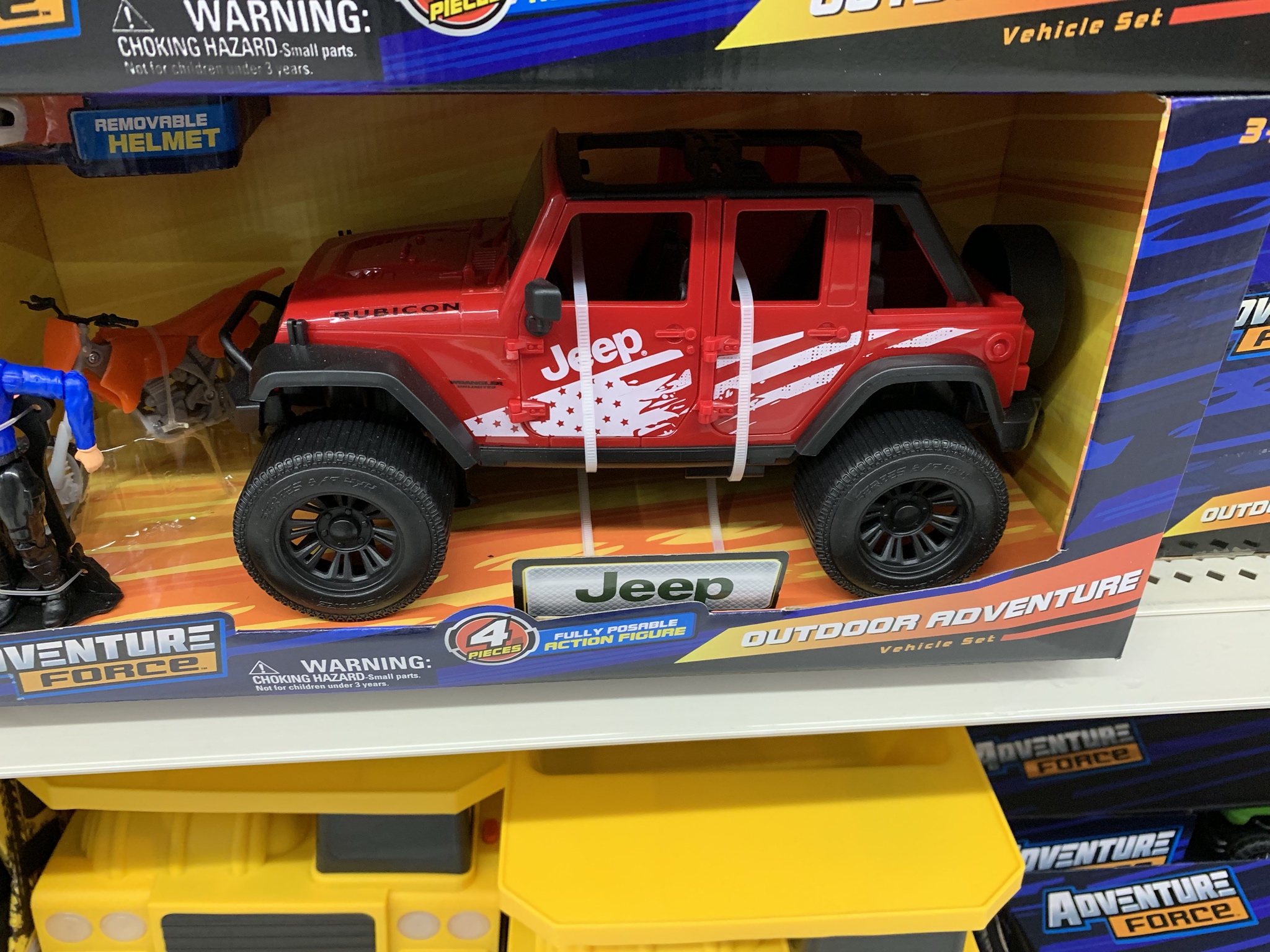 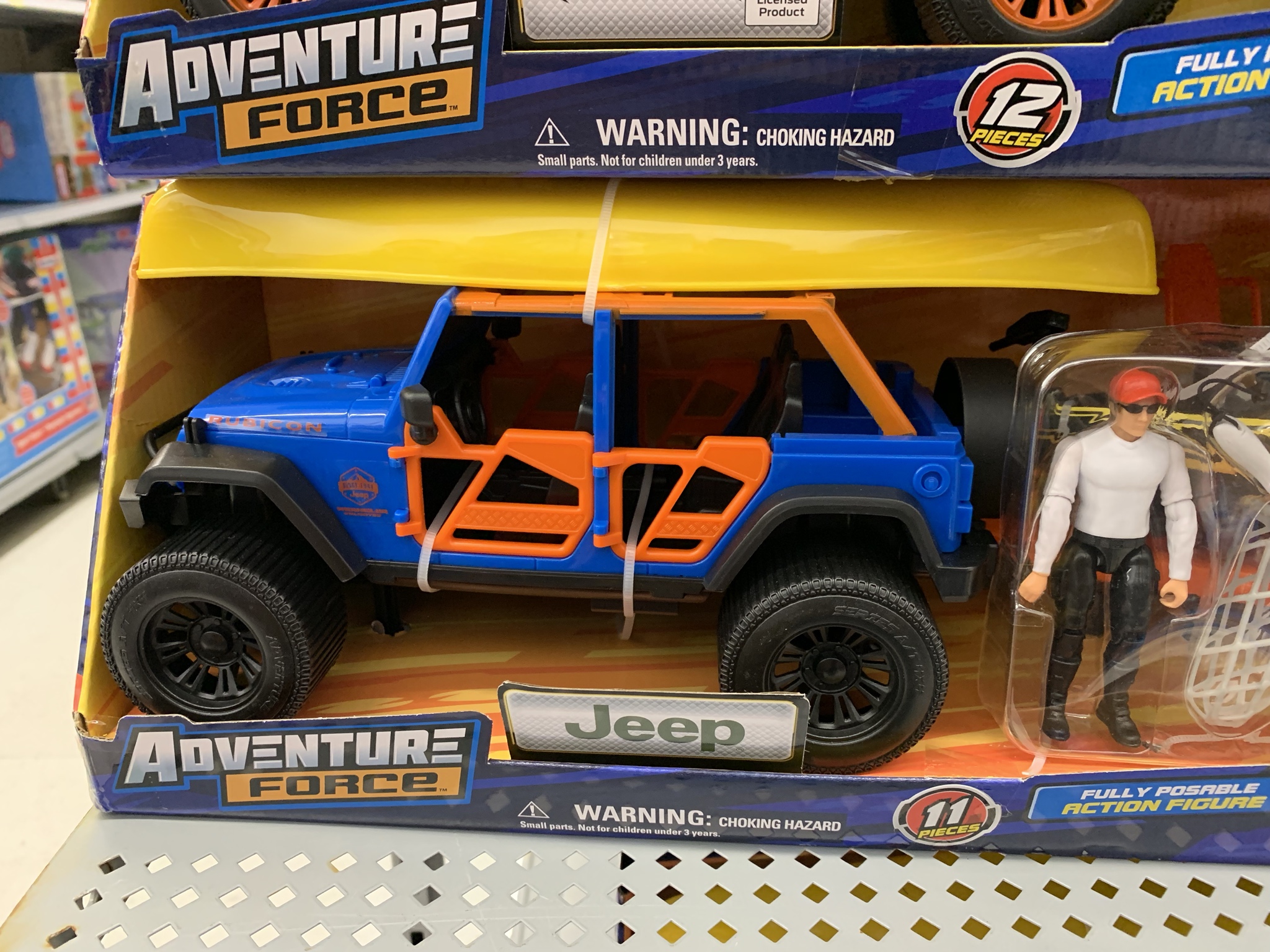 The red one looks exactly like the Green one...the white one is my favorite so far,because it has the roof which is removable,and just like the others underneath...the off road door versions are probably the best for military looking conversions.

I like that last one, but man those tires!

well,wheels off of,or copies of the Jp Jeep’s wheels can fix that right up. The axles are the same. Whole reason I posted it in this thread,lol.

Personally I’d rather put the suspension under it from a 1:18 diecast Jeep. I kinda want that 2014 1:18 Maisto Jeep renegade that’s online just to see how it’s built. Unfortunately I too must cutback after the holidays and youngest son’s birthday which is tomorrow,..plus,I’m one of those lucky Americans that doesn’t get tax returns...I pay more at the of every year. I used to about break even after paying for tax preparation&filing...3 of my dependents have become adults all over the last few years. It isn’t much,but no refund means outta pocket preparation.thats pricy AF...so,I’m pretty much not buying anything till spring,lol. hope if there’s a Dino Rival humans wave 2 it’s after that,lol.