The TFW2005 consensus is Snarl will be made due to those blink and you’ll miss it appearance in the movie and the fact Hasbro said they would complete the set. I love my Studio Series Grimlock far more than my MP version due to paint and durability. They are almost the same size. Who knows when my Slag/Slug will arrive, but people say he’s even better even though I’m not a fan of the red head.

Damn. Will be watching the price on DM. 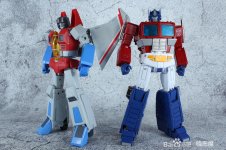 Yeah, if it ever gets sub-100, I might have to consider replacing TRUscream. I can't justify any more than that to replace something I'm perfectly content with.

This is all I could ask for in a retail line. Finally.

I hate how the camera exaggerates Streaker’s painted chest. Sucks they did not give Swipe the ports to add the tail fin. 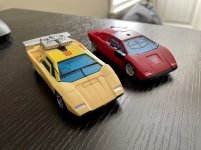 Do you have Seige Sideswipe? Just curious how they compare. I really hate that black square Swipe's car-side, and the lack of a wing is a massive visual distraction. I'd definitely have to add one if I picked this up. But I'm a sucker for a red lambo, so I might get one and fix it up. I will say, those heads look sharp for retail figures, much better than some in the past.

I think Siege Sideswipe was the last Hasbro TF I bought (for me), and I haven't opened him up... three years later. The boy has basically aged out of toys (he's 14 and only cares about video games now), so I suspect my Hasbro TF-buying days are about over.

Is it me, or are "deluxe" figures getting smaller and smaller? I was looking at some in the store the other day, and they're barely larger than most of the MFT Legends+ figures I buy these days. I recall CHUG deluxes being larger, but maybe my memory is going. Like everything else, they're shrinking and getting more expensive.

Deluxe is only 5” now, but Voyager and especially Leader is where the shrinkage really shows. Most of the leaders are just 8” voyager figures with accessories like Prime’s trailer or all the useless crap that came with Shockwave and Astrotrain. I care not though since they are all near perfect scale to each other as the MP line is and Sideswipe is my last one unless they do Earth mode Hound and obviously whatever giant Studio Series ‘86 Dinobots they choose. It feels great to have a full enough G1 cast in playable form.

The Lamborghini twins have always been my favorite, so $50 to get matching cars that transform completely different and especially the correct chest plate on Swipe was worth it to me. The 2 Swipe versions are so close that non-geewuners probably would choose the Siege mold if they could even tell them apart, but for me it’s all about being twinsies. I’m skipping Mirage (who is a way better mold update) to balance the books with myself since I will never touch that trash beastformer bird I was forced to pay for.
You must log in or register to reply here.
Share:
Facebook Twitter Reddit Email Share Link
Top Bottom