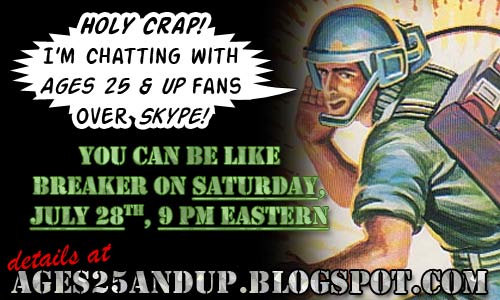 Forum member 1337W422102 is famous for his weekly comic series “Ages 25 & Up – Comic with Balljoints”. 1337W422102 who is commonly referred to on the forum as “Numbers” or “Leet” has transformed a  mostly background character like Clutch into a much loved heroic character.  Ages 25 and Up features comedy and Easter eggs for all fans of comics, cartoons, toys, movies and popular culture from the 1980’s to present day. The comic was first published in 2008 and has experienced several milestones throughout the years.  Ages 25 and Up has featured serious stories,  an ode to GI Joe comic #21,  an amazing take on Captain America, yearbook style issues,  a vote of confidence from Larry Hama himself and an epic #100 issue that used stop motion!  The comic has sparked it’s very own Q and A’s with questions submitted by the fans and organized by Staff member Monkeywrench and truly has a cult like following. The weekly comic is currently stuck on issue #199 with #200 right around the corner.  Like everything these days,  we have a hype train to catch before we can experience this epic milestone.  To start is the first ever Ages 25 and Up Skype Session.  Numbers will be hosting a live Skype Chat Saturday July 28th at 9pm Eastern Time.  A web camera and mic are preferred however they aren’t necessary.  You can visit Number’s blog to get all the details Here