I finally gave in to the NECA seduction a few months ago. For over a year, Rambo and the ALIENS line would catch my eye when I took my son to Toys 'R Us. I always resisted, reminding myself I've made a huge 1:18 investment and 1:35 investment and those projects never seem to be done. Then I congratulated myself for making mature decisions.

But, since I am always looking for Vietnam era customs and conversions, the draw back to Rambo and the Dutch figures continued to beckon. Now I have both Rambos and two Dutches and I'm not sure what to do with them. I was disappointed with the articulation - I thought it looked better. The thing that keeps me from jumping out with a project are the headsculpts. No matter what, I can't make Arnold or Sly look like a grunt. So I may have to get a couple of ALIENS dudes and see if I can swap sculpts.

Yeah, I stayed away too until they came out with the Colonial Marines. Then I had to go and pick up a few of the Alien warriors and it looks like I'll be buying even more what with a Queen, power loader, Ripley and a host of other characters on their way.


It's alright, Drop, you can admit you've got an erection over this news.

Dog alien is amazing! Now to get one and figure out a way to make the Alien from Alien Isolation.

I have half a mind to get one and keep duck eggs in it: Saw Ash a week or two ago. I'm more interested in seeing if there will be any other figures from the show.

Ash looks a tad too squinty. Will be anxious to see how the eye paint app works out

WVMojo said:
Ash looks a tad too squinty. Will be anxious to see how the eye paint app works out
Click to expand...
I was thinking the same thing. No way in hell they'll be able to duplicate the eye apps the two-up will sport on a 7" figure.

Damn it I want that. Bad. Just finished up Ash vs. Evil Dead. The Raimi-directed episode felt like classic Evil Dead. The others had a different feel visually but were still enjoyable.

These THE HATEFUL EIGHT Figurines Are Gloriously Retro | Nerdist

Hateful 8 figures coming...now if we could only get the Ridiculous 6.

Eh, 8" dolls still puzzle me. Bet they go well with the Django Unchained ones, though.

So, who wants 1:18 AMT Hardballers with lasers and Ithaca 37s?

I wonder if I can find a 1:10 '77 Dodge Monaco in LAPD livery to sit that motherfucker in?

So, the chances of us getting this in 1:10 are practically nil (fuck you, Mattel), but I'm gonna post it anyway. They nailed the likeness on the alternate head, but something just isn't right with the at-rest face.

Goddamn, that is marvelous.

Does this mean we'll get a non facehugger John Hurt Kane?

Edit: based on the photos, where the figure is constantly facing away, I'm going to say "no".

Now who's the dipshit, you jock douchebag? 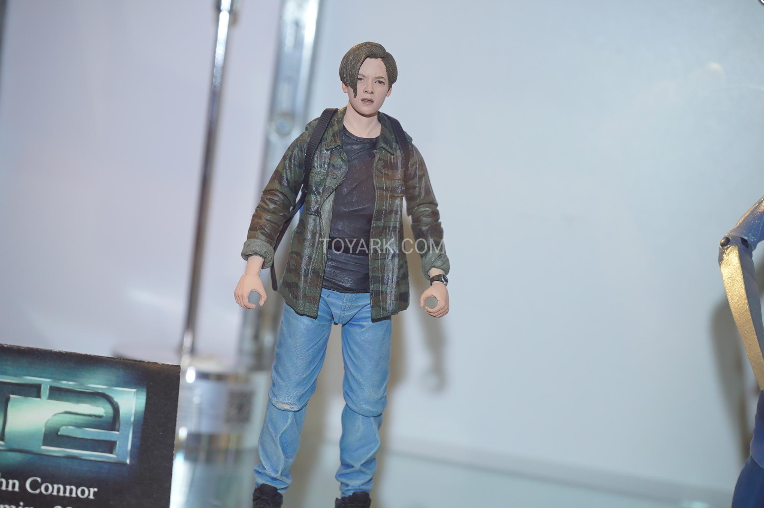 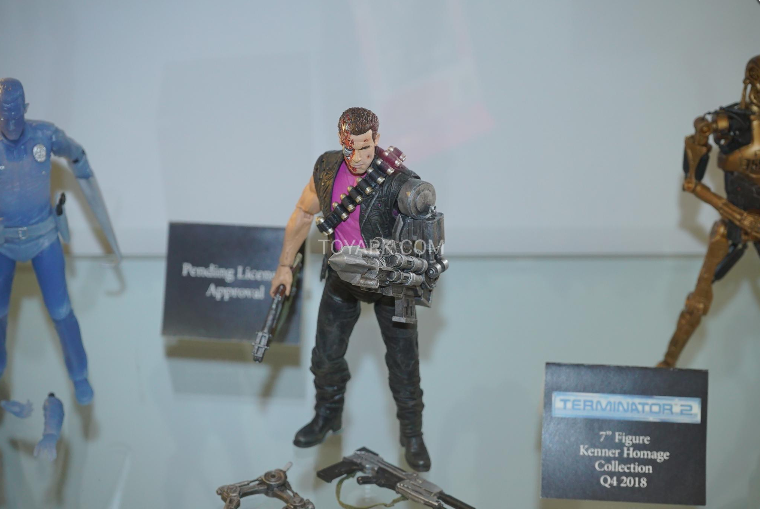 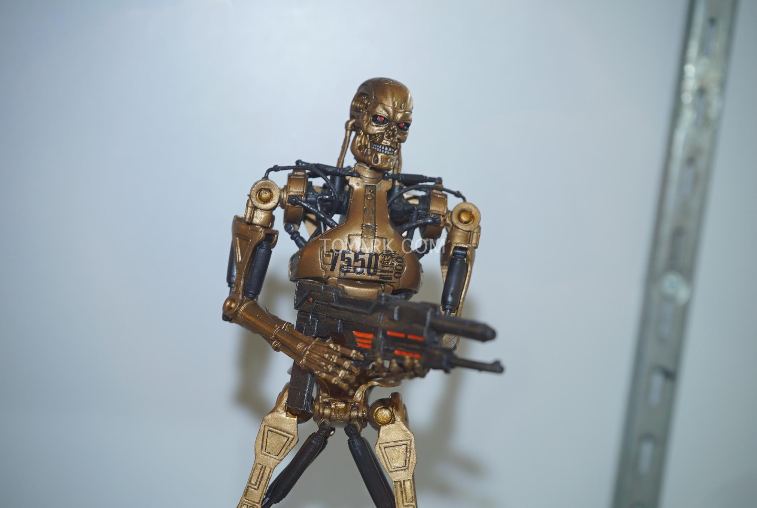 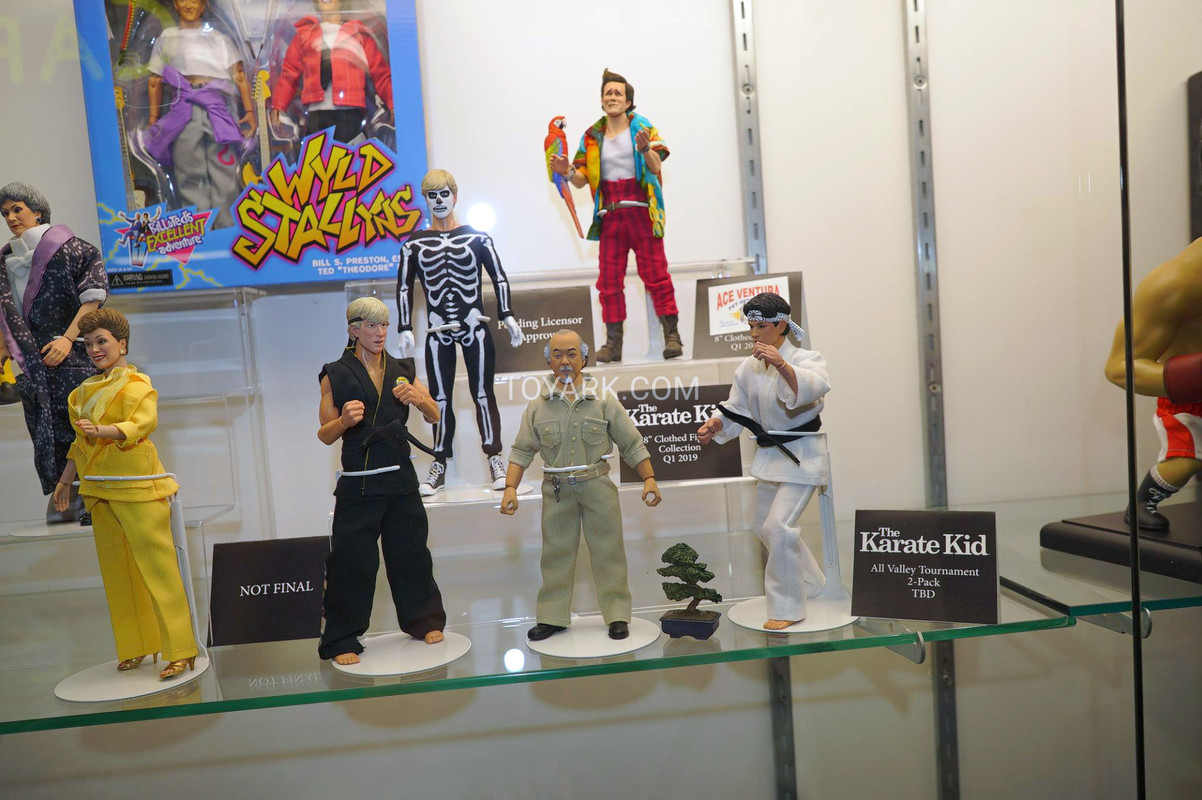 Looks like I'm gonna be hitting Target a lot.

Those NECA jerks-offs. People have been asking them for years to do a John Connor (in any form) and they acted like it wasn't happening...ever.

Yet there he is.

Guess we can't take their word that they have tried contacting several ALIENS actors to get their ok and supposedly they said "NO!" to figures. We won't be able to believe a thing they say from now on. 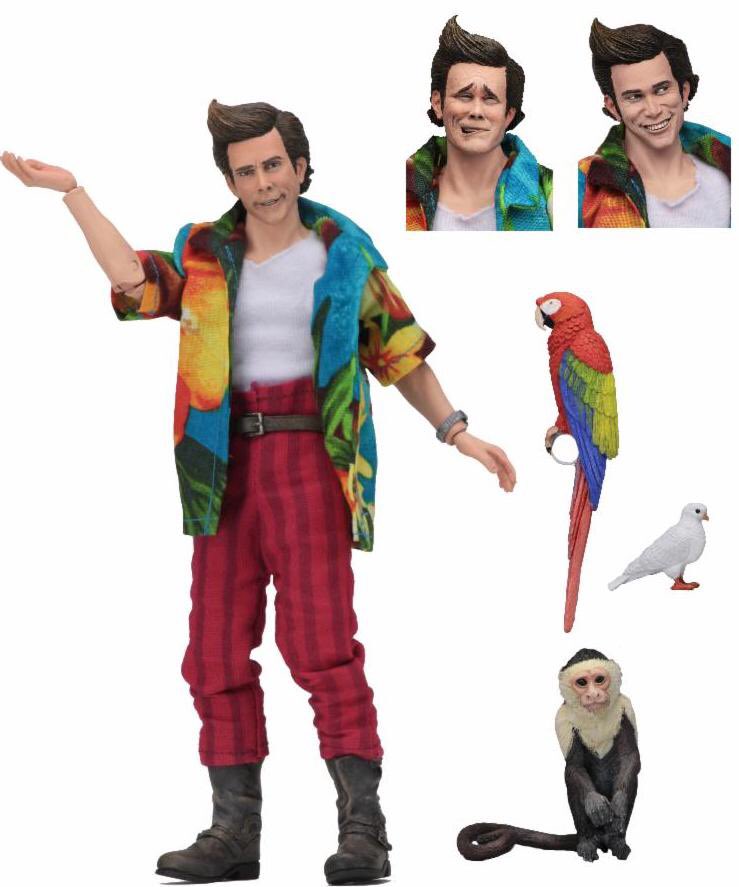 Got to say, these likenesses are kind of weak.

It's a dam toy company, I need to NOT take it too personally.

All I know is I'm raiding Target the first week of August and there damn well better be Pennywise figures there.

Went yesterday (yes, I know they officially don't have to have these set up until Friday). They hadn't even started, but I've seen shots from a couple of different stores and it looks like if you aren't a Freddy/Jason/Godzilla fan then you're going to be shit out of luck. Target didn't even have the goddamned decency to make my trip worthwhile and have the LEGO Harry Potter CMFs put out. What a useless retailer.

I went yesterday or the day before and didn't see Pennywise either. Godzilla, some new MEGO stuff and Stranger things...and a few other figures, but that's it.

I did get a NECA item in the mail, Burke and concept Alien Warrior (with Hadleys Hope sign). Had to order it since TRU never had it even when they were still open. A fine set of figures...I think I'd like the sign better if I knew if it was in the correct scale or not. The dome on the warrior wasn't attached to the head all the way around, leaving a gap along both sides. I could get it to touch if I pressed down hard enough, but I don't know if I should try and attach it all the way around, or maybe take it completely off. Even if I wanted it attached, I'm not sure what to use since I know superglue will end up fogging the plastic.

And I don't know how to feel about the permanent look of surprise on Burke's face. Same thing with the one version of Hudson where he looks like he's crying, or the "I'm pushing one out" face on Lambert. I suppose it's good to have some sort of variation other than just a neutral expression, but these expressions seem to lend themselves TOO MUCH to a specific scene. In the case of Lambert, she just looks silly.

I like when they do multiple heads, and Paul Reiser definitely needed one. I'm probably just gonna bite the bullet and get Pennywise from Game Stop. 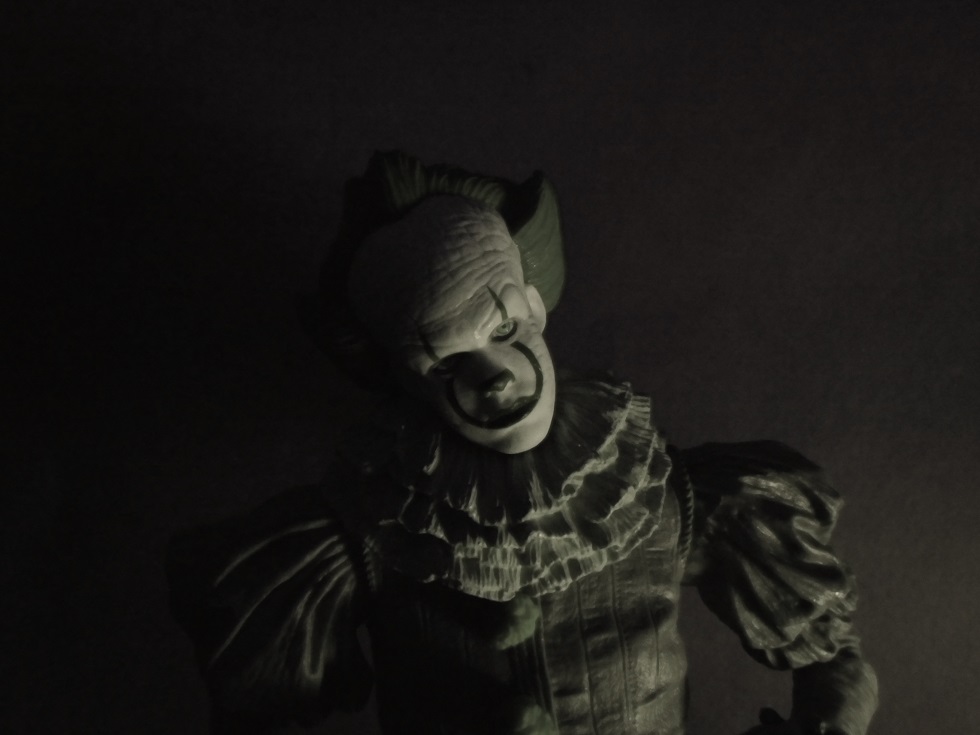 So I found this bastard. Really think he could use a "ssshing" hand, and I could easily find half-a-dozen expressions that should have been heads, but those are the breaks. I reckon I'll need a kid for him to stalk, looks like McFarlane has me covered. It'll mean another trip to GS. *spits* Maybe she'd be better fodder for Freddy Krueger? 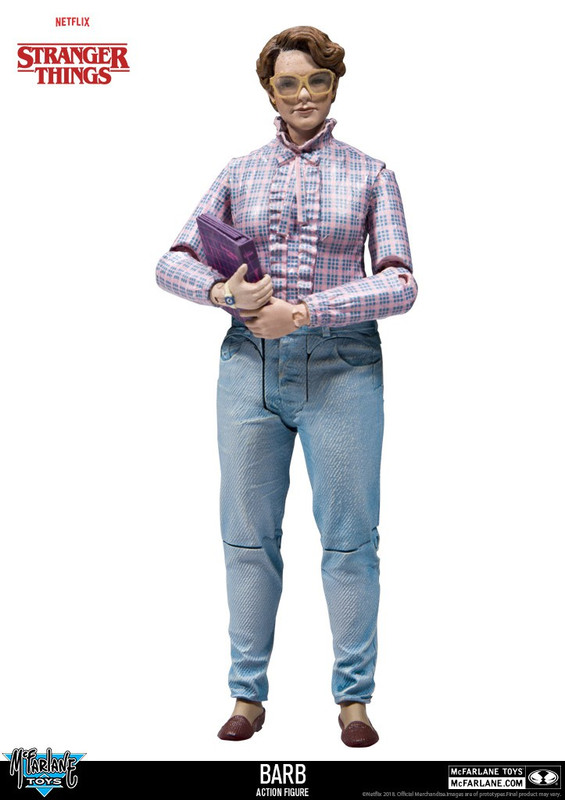 I was " " this close to buying that figure at a local specialty toy store for my wife, but I didn't know which version she wanted more, Curry, or this one (she's a big SK fan) This store has them for close to $30 and I didn't want to buy both. I asked her and she couldn't tell me if she even wanted one because it would just "be sitting around". Then I asked her about the Funko 3&3/4 figures, but they have three or four different versions of Pennywise and each one comes with two different kids. She wants the Pennywise, but doesn't know which version and doesn't want the kids.

That's a woman for ya. I'd say wait for Target (Pennywise '17 HAS been seen there, but Pennywise '90 doesn't ship for another week, supposedly), but the price won't be any better.

NECA's SDCC 7" 1990 Teenage Mutant Ninja Turtles are coming as Game Stop exclusives in February. The toy gods have gotten them around Playmates' (may the fuck be upon them) cock-blocking. You know I'd never hawk for GS, but if you're in that generation that grew up with the OG movies, you're not likely to get a better representation of the boys. 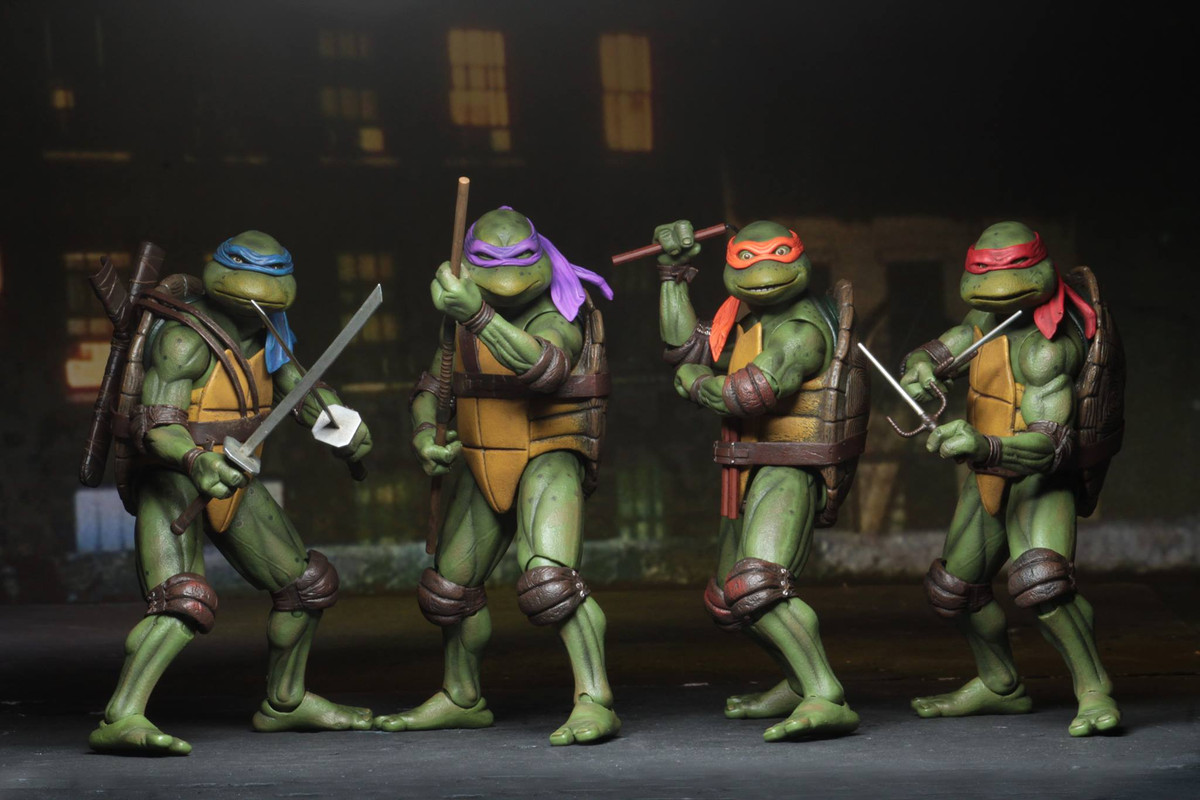 Looks like we're getting another Pennywise '17 release, this one with a blue-eyed storm drain scene head, as well as an impaled head with lanker hair. Should get a full reveal tomorrow, but these are the teasers. 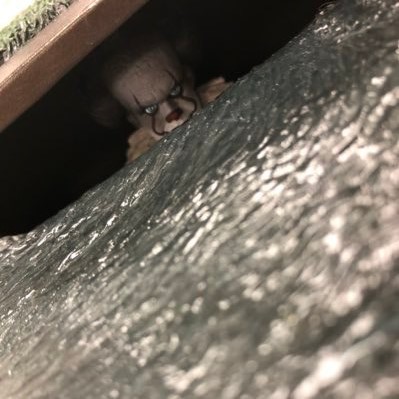 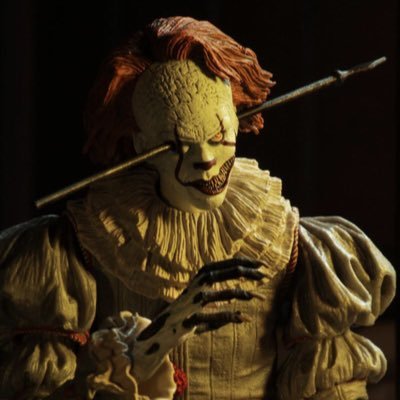