I had completely forgot that I bought my wife a Pennywise '90 a few weeks ago as a belated birthday/anniversary gift. I've been trying to talk her into opening it, but no-go yet.

NECA just released a diorama for their figures 6-8” sized

Wish someone would do this for 1:18th

Dropshipbob said:
I had completely forgot that I bought my wife a Pennywise '90 a few weeks ago as a belated birthday/anniversary gift. I've been trying to talk her into opening it, but no-go yet.
Click to expand...

You haven't lived until you have a 1:10 Tim Curry pointing and laughing at random items on your desk.

Wish someone would do this for 1:18th
Click to expand...

The building dio? Yeah, I can see the appeal. It seems like whenever someone does something for 1:18 it's either of limited utility, overpriced or cheaply-made. Sometimes all three.

We're getting a Valak! I ain't never watched none of them-thar Conjuring pitchur shows, but I'm always down for a nun figure, even if it's a demonic nun apparition. 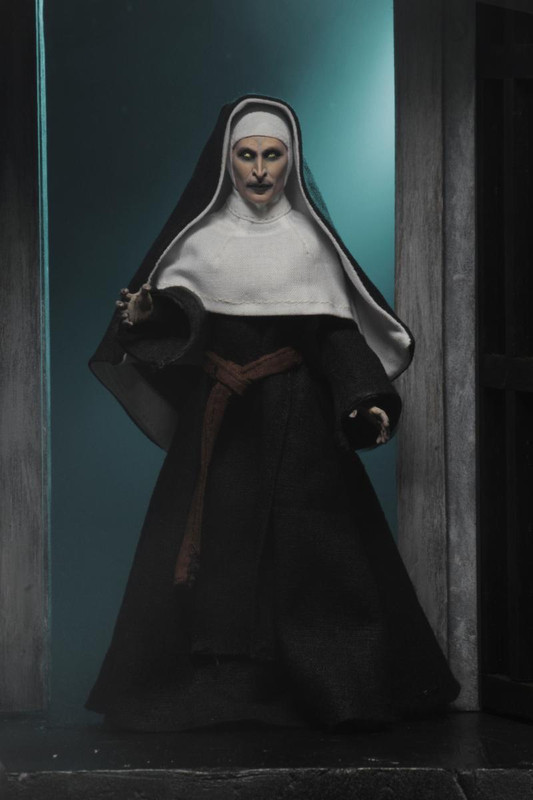 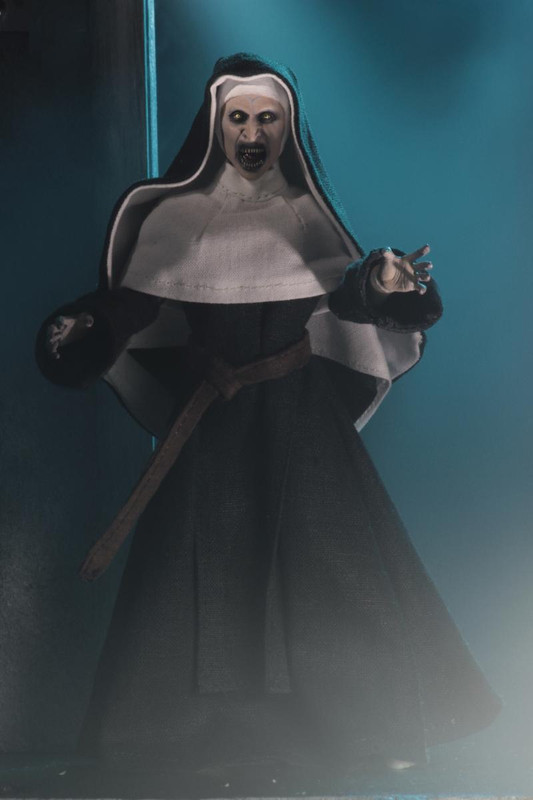 I saw the broken tooth Predator and Machiko the other day at Target. I thought I would buy these up the moment I found them....but I actually put them back! I DON'T KNOW WHY!!!

You're probably gonna regret that. I was thinking of grabbing Machiko if I ran into her. Still waiting on that damn Ultimate Jungle Hunter re-release.

The broken tooth Pred looked pretty dam cool...but I thought the alien skull on the front should be bigger.

I do, too. I thought the kusazuri/cod armor looked a little too much like teets, as well. Anyway, My Target had a couple of Machikos and 2-3 Broken Tusks, so I grabbed the Machiko with the correctly-calibrated eyes.

You didn't get a broken tusk?

You ought to go back and get her, Drop. Other than the plasma caster being on backwards (already tore one side of the hinge. I guess that fucker is staying the way it is.) and the sloppy net work, she's pretty cool. 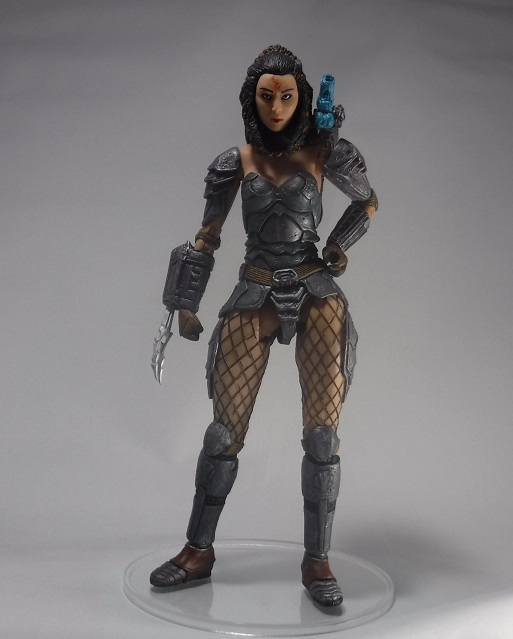 Completely unrelated, but I saw a video of McFarlane's Fortnite Cuddle Team Leader, and the range of motion on that figure is fucking killer, and completely atypical of McFarlane's work.

I hope the plasma caster isn't screwed up on all the Machikos.

Maybe McFarlane finally got his shit together and decided he better be on par with NECA if he wanted to survive. A few days ago I got out some old McFarlane stuff and I just couldn't believe what he tried to get away with. BUT....I'm probably just as much to blame as I was buying the stuff like crazy (but sold most of it long ago).

McFarlane has been been known to make some really odd articulation choices. Some of those Dark Ages figures are real head-scratchers.
I'd be more concerned about the paint apps on the eyes. I managed to get my plasma casterturned around, but I'm not a fan of how NECA has done them in general. McFarlane's folded down nice and neat in the back. NECA's are kind of always...semi-erect?

I couldn't tell you about NECA/plasma casters. The only Pred I have of theirs is the Elder I bought a few years ago from Hastings...and I haven't actually looked at it in a long ass time. I STILL have my McFarlane Predator 2 figures....I just saw them the other day while digging in my hoard. Can't believe I still have those.

The McF Predators were pretty good for their time.

True, but I think they are a little on the small/short side.

I reckon they're definitely out of scale with NECA's. Which reminds me, I don't think all of McF's current stuff scales with each other. I want to say the CoD stuff is on the small side, and the Stranger Things kiddos being a bit too tall. Barb from Stranger Things scales well with the NECA stuff I have out, though.

McF needs to get his shit in order. I'm surprised he hasn't had to fold due to NECA's overwhelming business model and superior product.

McFarlane has always been spotty.

He should have been doing NECA-level articulation 10-15 years ago, but he had to cheap out. I know he did so so he could put that money towards making a better sculpt, but sometimes even the sculpt wasn't there!

Whatever, water under the bridge. I haven't bought any of his product since his ALIENS queen.

McFarlane hates articulation he can't "hide", which is funny considering there isn't a more hideous articulation style than the one he's been using on the hips of those The Walking Dead and Stranger Things figures. WOOF! What he's doing in the Fortnite line should be the standard, but it won't be. I can hear him saying "Daeneys doesn't need to move like Cuddle Team Leader does. Herp-durr-derp!"

NECA doesn't get it right all the time, but I mostly like what they're doing. My gripe with them is all the cool properties they've done that are statueshit figures, and most of them will never get articulated, "Ultimate" style figures.

So I guess they are both guilty of the same articulation crimes.

Not cheap, but your old lady might dig it.

While she is a SK fan, she's not really into collecting in general and she STILL hasn't taken the '91 IT figure out of it's box. That one above does look cool, but she'll never ask for it.

NECA's doing an accessory pack for IT '17, but it sucks.

What's with the sad '91 kid-IT, is that something that is going to be in the next IT film? I don't remember seeing that in the first one.

Set dressing from this scene:

Watching again, they sculpted it looking in the wrong direction, though it could just be the promo image is mirrored. I might bite if the blue-eyed head comes out alright, and can be used on the actual figure, and if I can find it at Target.

I don't recall even seeing that in that scene! Also seems like an odd choice for an accessory....they need more than that if you want to recreate that scene, like maybe that child size coffin. Also, from that same clip, there's the other clown standing off to the side as the kid passes and it slowly turns it's head...reminds me of that evil clown doll from Poltergeist.

Yeah, it's kind of "blink and you'll miss it". I would have preferred a head pack, or a pack with less reuse. What am I supposed to do with Georgie's arm? There's no Georgie to lay in front of the storm drain, and there's no gripping hand included for Pennywise. Another balloon and SS Georgie? The Friday the 13th and A Nightmare on Elm Street accessory packs are pretty cool. This is feeling pretty weak by comparison.

NECA showing off MORE Pennywise '17 stuff. Smoke-arms head, a new snarling head, Deadlights and Flute Woman painting heads, and a set of crab arms. Looks like a set of closed fists, too.

Looks like I picked the wrong Pennywise for my wife.

I didn't intend on buying 3 fucking Pennywise figures, but they sure got me by the short hairs. I fear what they do for the sequel.

Finally got this evil bastard. No, the articulation will not allow for that cool, SPAS-12-on-the-shoulder pose, but most of the other shootout poses are do-able. I'm also convinced that something isn't right with the scale on the AR-18.
R. Mika just because, though she actually scales pretty well with ol' Arnold. I need to dig out my old SOTA Sagat and see how that looks.

Is that version of Terminator new? And that LED Pennywise....wowwee!

They retooled the legs and released them with all the accessories back in 2017, I'm just now getting the Shootout version. They just re-released the Ultimate Terminator 2 version, though.

Guess I'm gonna have to work on my painting skills. Gonna have to put the Public Enemy logo on his t-shirt.

I have seen how a lot of people over on the sideshow collectors board have been wanting that for years.